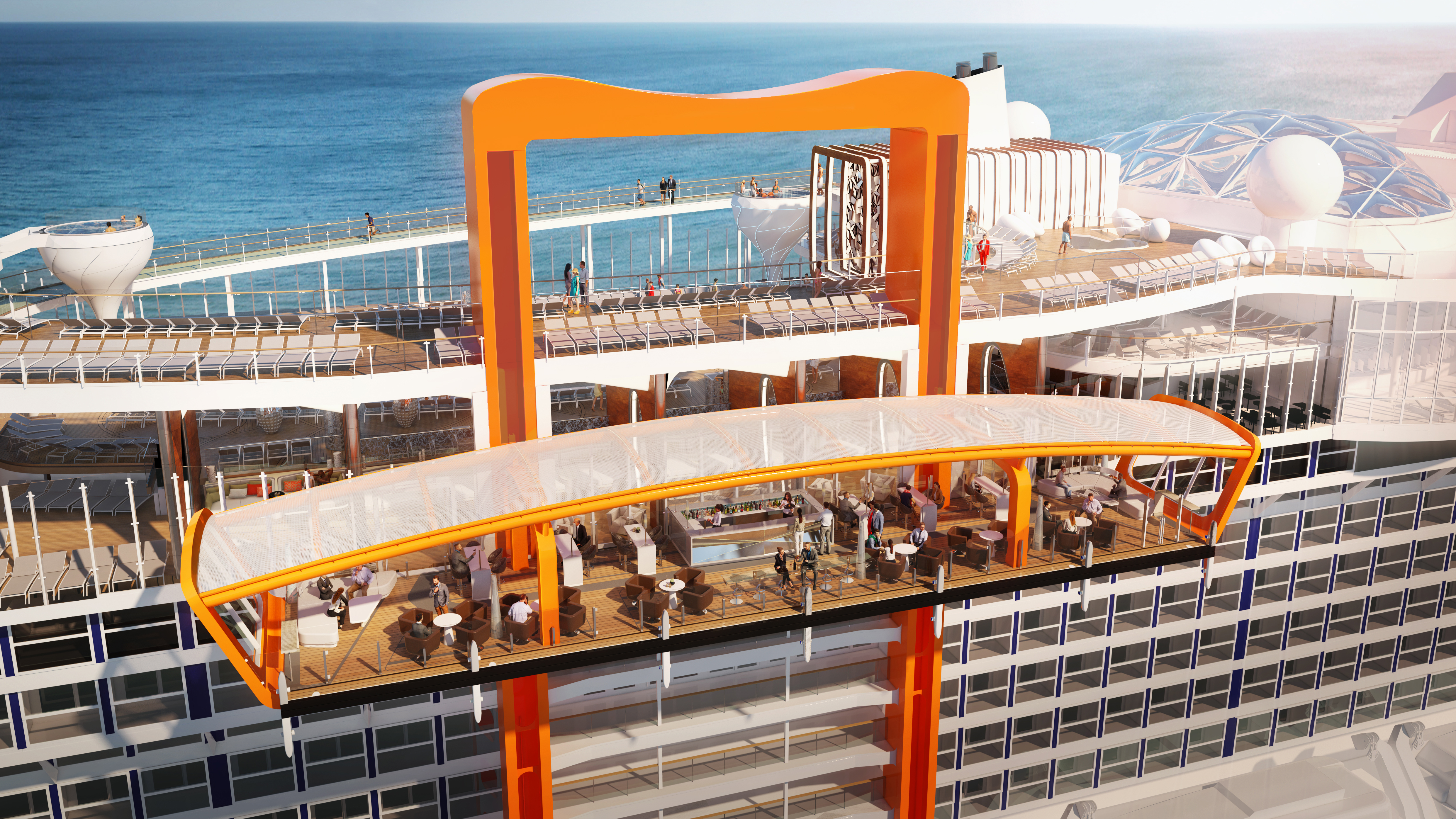 Dining on the Edge: The Magic Carpet

Celebrity’s new ship Celebrity Edge will call into Southampton in May 2019, it was announced tonight.

The innovative vessel will set off from the port on May 13 on a trade/media voyage before starting a ten-night journey on May 15 taking passengers to Rome where it will start a European season, Celebrity Cruises president Lisa Lutoff-Perlo revealed.

She told journalists and agents at an event in London that commercially it would probably have been better to sail directly to the Mediterranean from the Caribbean. But Lutoff-Perlo added: ‘It was really important for us to bring Celebrity Edge here. We want you to touch it, feel it, sleep in the beautiful beds and enjoy the environment that [British interior designer and former Dragons’ Den star] Kelly Hoppen has created.’

Cool design: One of the suites on Celebrity Edge designed by Kelly Hoppen

In a press release accompanying the announcement, Lutoff-Perlo claimed: ‘Europe has never seen a ship like this before and you’ve never seen Europe like you’ll see it from Celebrity Edge. Its curation into the most stylish, intimate and intuitive ship to ever sail is carefully complemented by the destinations featured on the first European season.

‘From island escapes to culture capitals of the world – the “hot list” destinations of the future, Celebrity Edge’s summer 2019 itineraries promise to enhance and bring to life this revolutionary ship and change the way you experience the world.’

Celebrity Cruises will base five ships in Europe in 2019, Lutoff-Perlo added.

Celebrity Edge, which launches in December 2018, will have ground-breaking features such as the Magic Carpet, a restaurant that moves up and down on the outside of the ship between decks 2 and 16.

Designer Kelly Hoppen said the cruise industry was ‘so far away from my world’, adding: ‘I suspect it was the challenge to design something for a cruise ship’ that inspired her. ‘It was like “why hasn’t it been done before?”. The challenge was to push boundaries, to create not five-star luxury but ten-star luxury’. She said the computer-generated images released so far were great but ‘the reality is going to be a million times better’.

Hoppen added: ‘My inspiration has always come from travelling – from music, the taste of ice cream. When I come back I’m firing on all cylinders.’

She said of Celebrity Edge: ‘We have pushed the boundaries in every aspect and we have managed to achieve them. The end result will prove to be perfect.’

But she teased: ‘There are lots of other things I’m not allowed to talk about.’

The Celebrity Edge voyage on May 15, 2019, leaves Southampton and visits Bilbao and La Coruna in Spain, Lisbon in Portugal, Gibraltar, Cagliari in Sardinia and Civitavecchia.