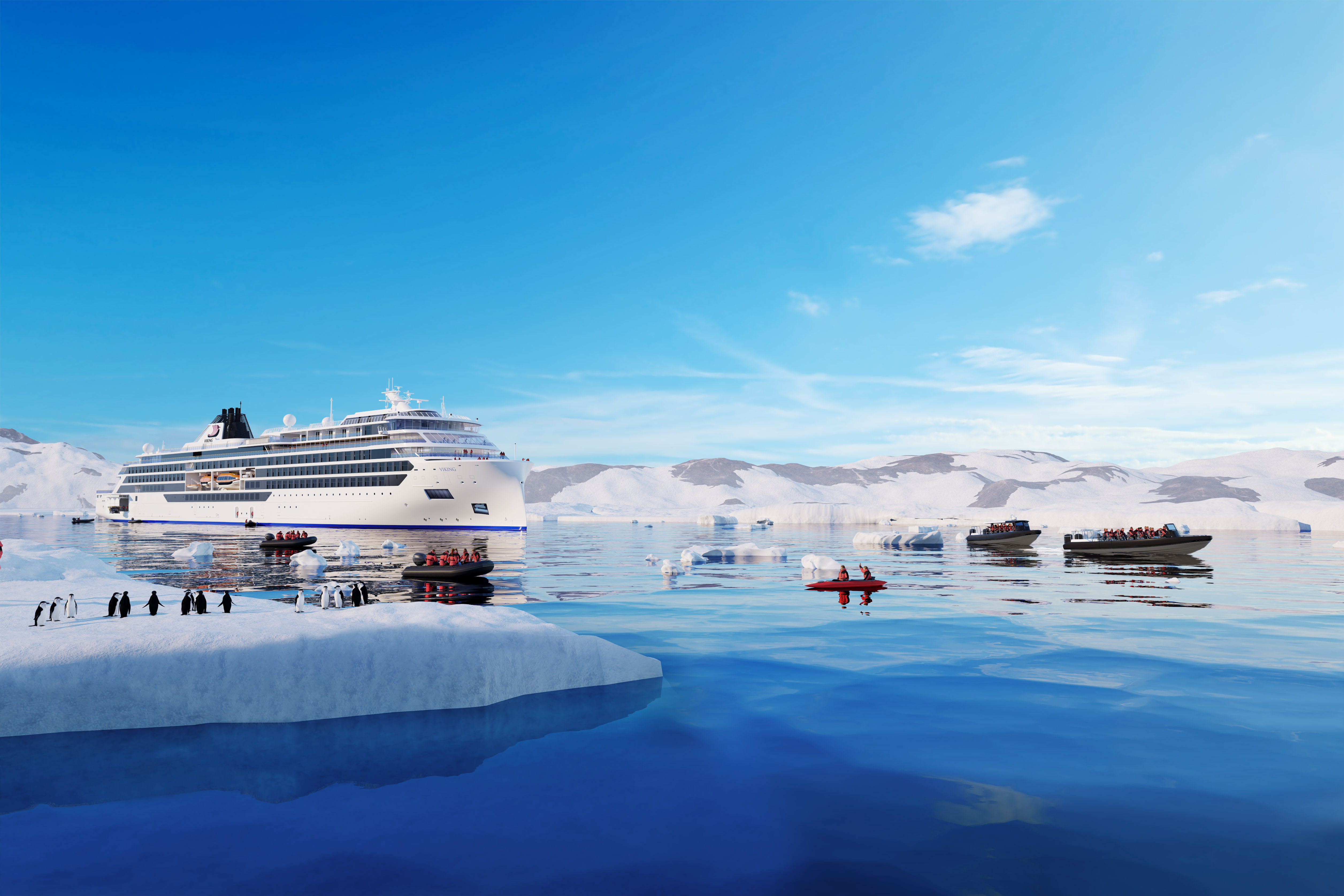 Polar quest: The Viking ships will take guests to the Antarctic (Picture: Viking)

Cruise line Viking has announced details of the two new expedition ships it is launching in 2022.

Viking Octantis, which will debut in January that year, will sail to Antarctica and North America’s Great Lakes. Viking Polaris, being introduced in August 2022, will serve the Arctic and Antarctic. Each ship will be equipped with two six-person submarines.

‘In creating “the thinking person’s expedition”, we are perfecting polar expedition cruising – and we will usher in a new era of comfortable exploration in the heart of North America,’ Viking chairman Torstein Hagen told an audience in Beverly Hills, California.

The 378-passenger ships, being built in Norway, will have the following features:

Slipway: Expedition boats will be launched from a slipway (Picture: Viking) 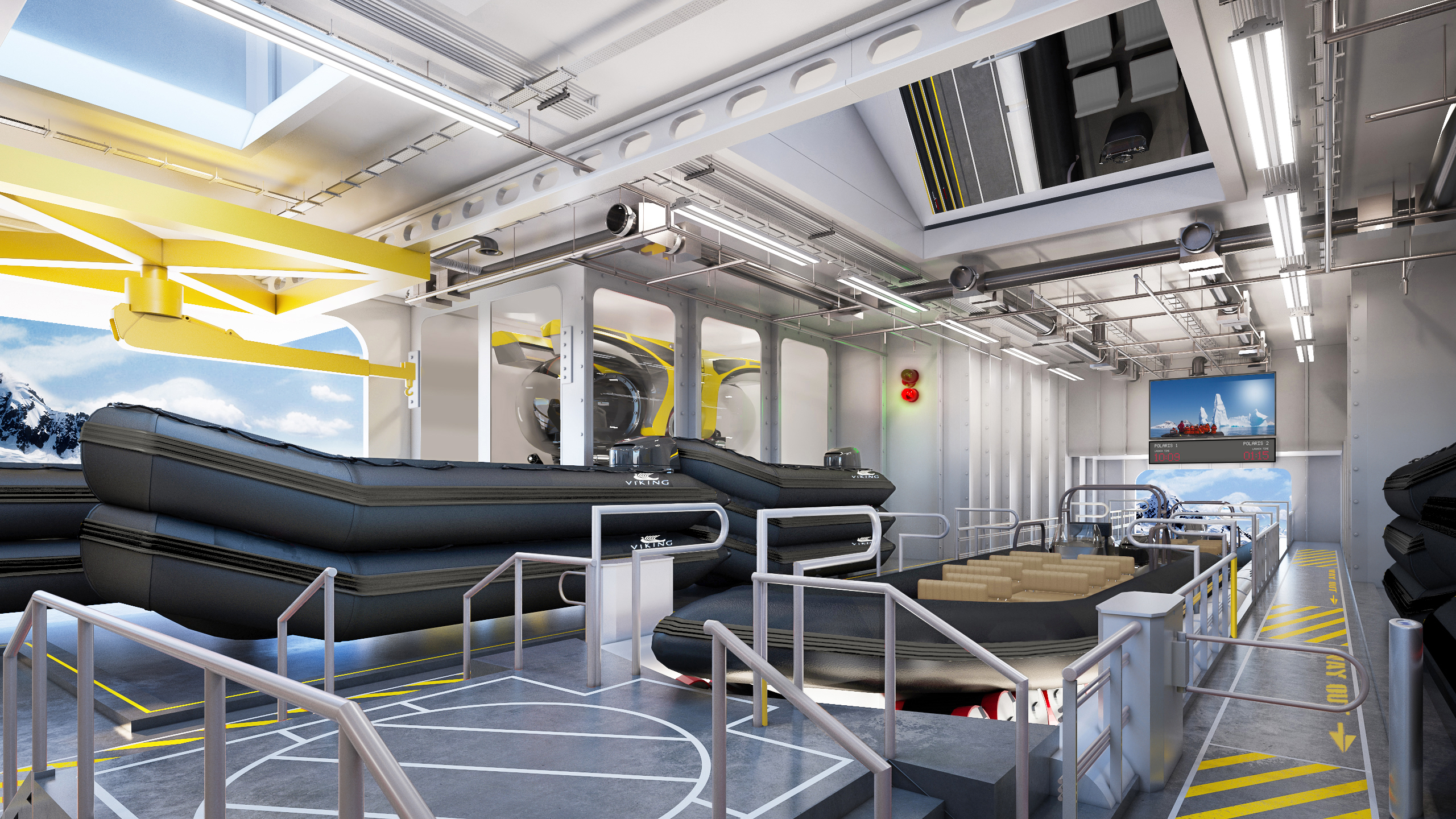 Warm and dry: The inside marina where guests will board the boats (Picture: Viking)

The Hangar: In an industry first, guests will be able to board RIB craft inside an enclosed marina and be launched down an 85ft-long slipway into the water. 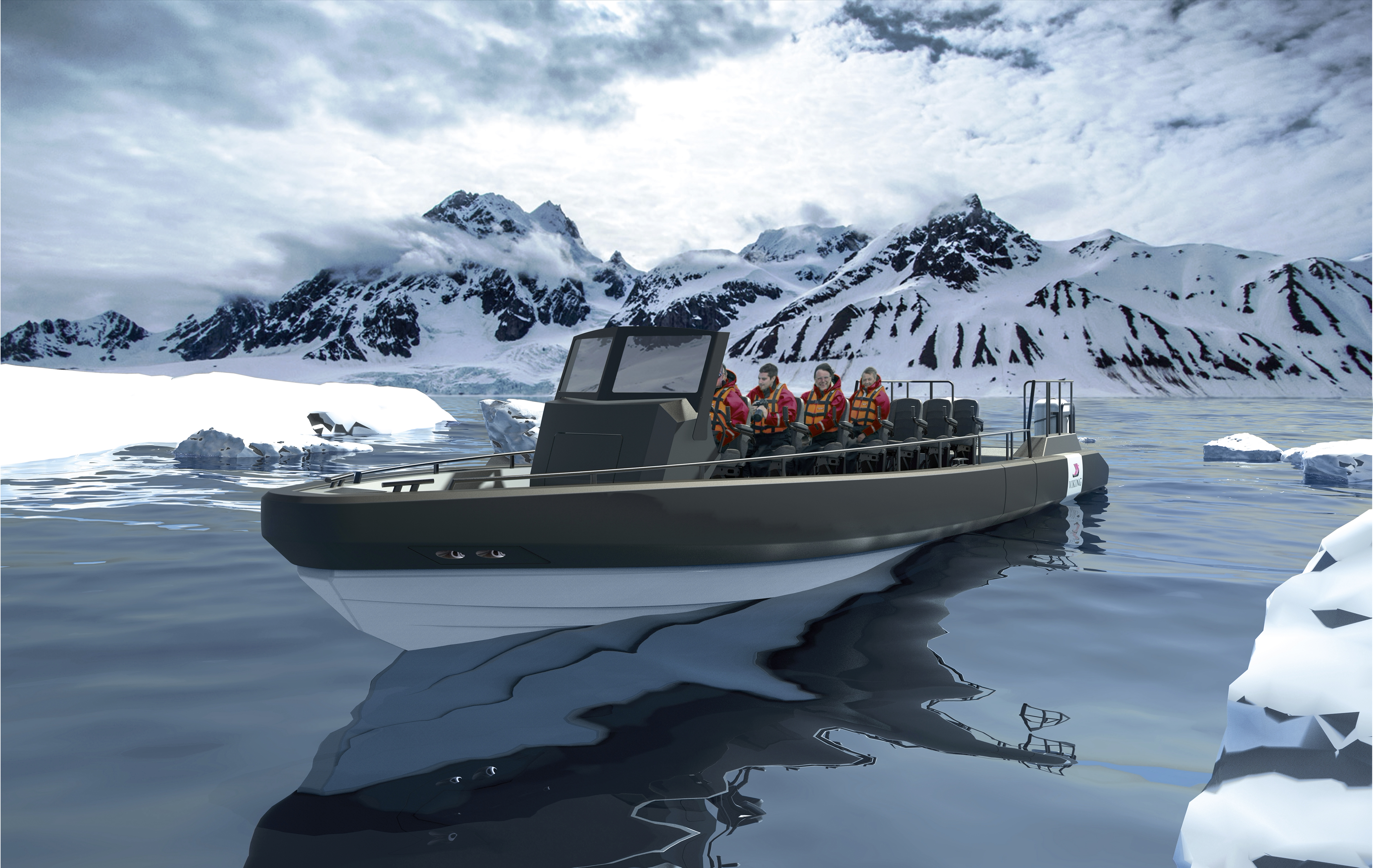 Expedition equipment: Each ship will have two six-guest submarines as well as military Zodiac boats, two-seater kayaks and two 12-seater convertible RIBs. Guests will be provided with boots, binoculars and waterproof trousers and be able to use trekking poles, snowshoes and skis. Excursions will carry safety gear such as satellite phones, VHF radios, ropes, life jackets and a shore survival kit. 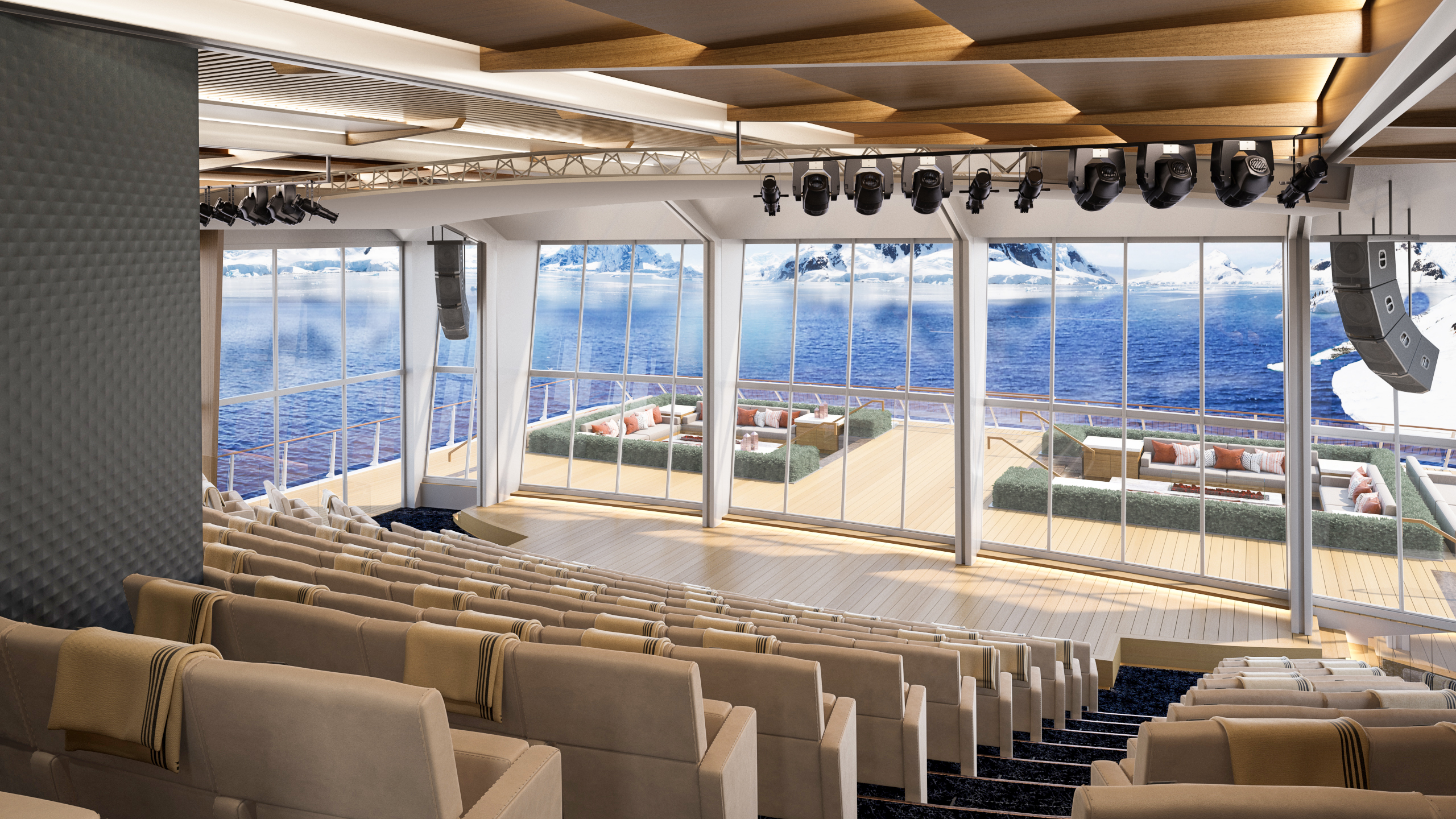 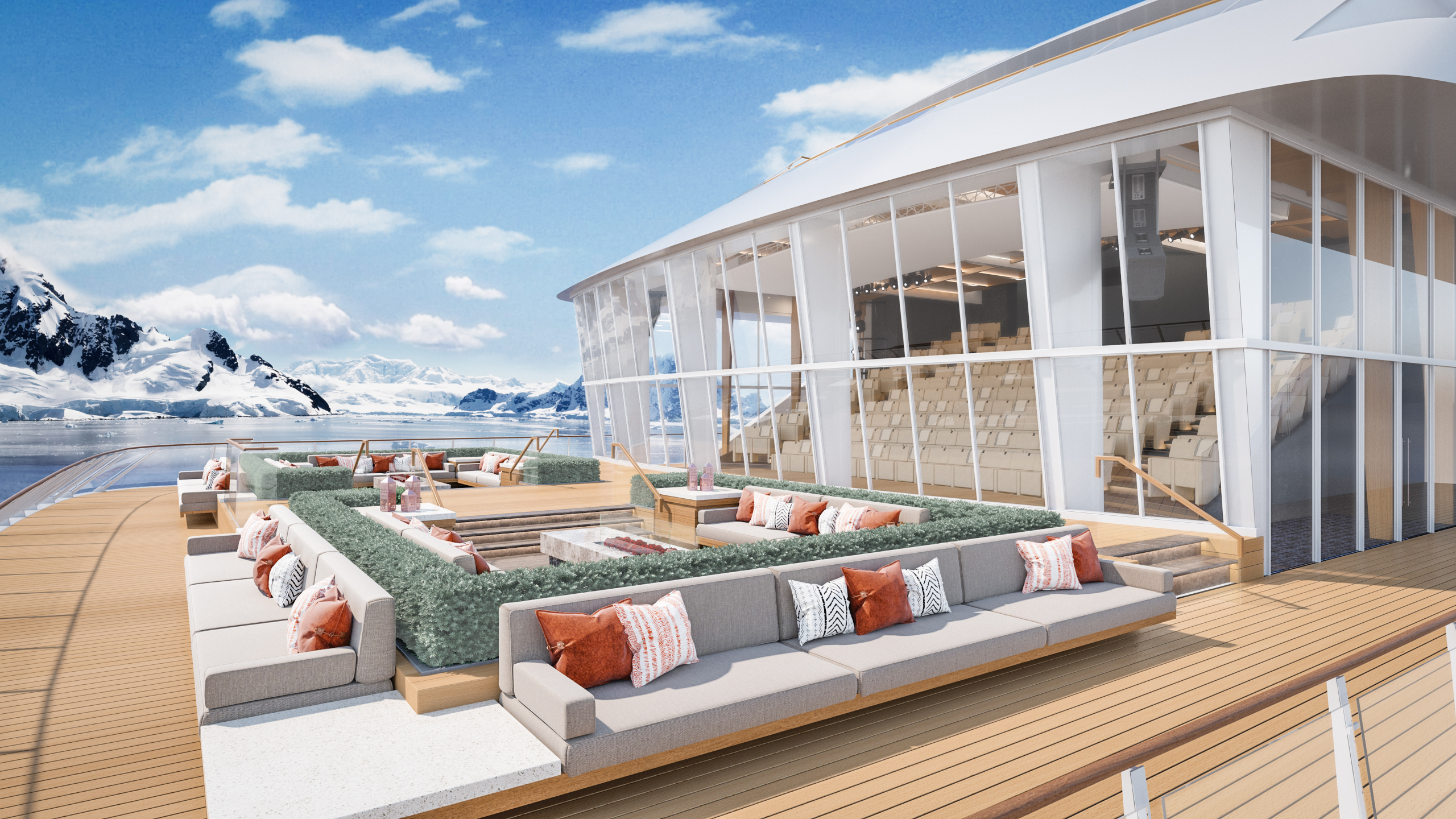 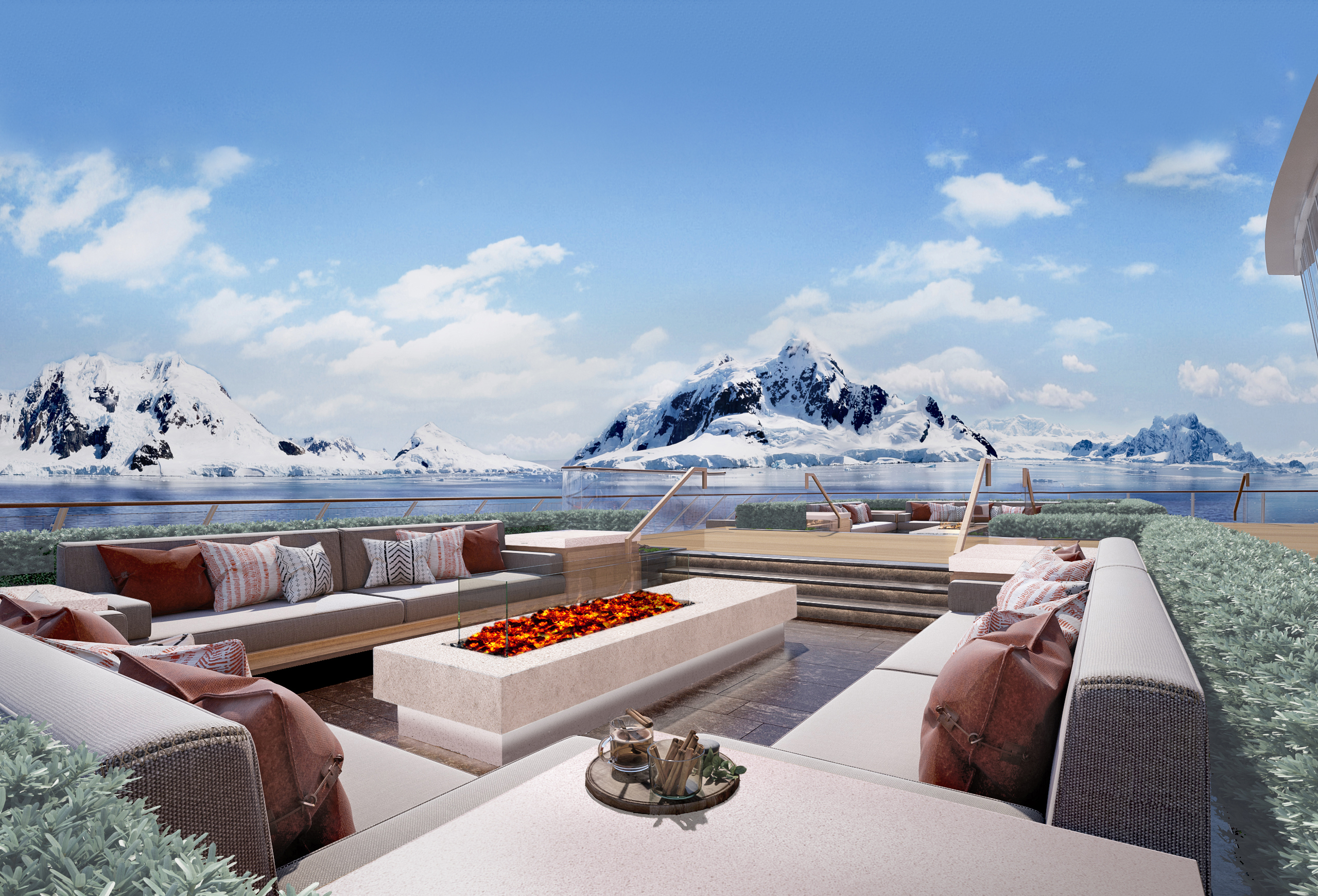 Chilling: Passengers will be able to admire the scenery from the Finse Terrace (Picture: Viking)

The Aula and Finse Terrace: The Aula will be a panoramic auditorium at the stern. Inspired by the ceremonial hall in Oslo where the Nobel Peace Prize was historically awarded, The Aula will host lectures and entertainment, with floor-to-ceiling windows and 270-degree views. Outside is the Finse Terrace, a lounge area with couches and lava rock ‘firepits’, which will give panoramic views of the surroundings. 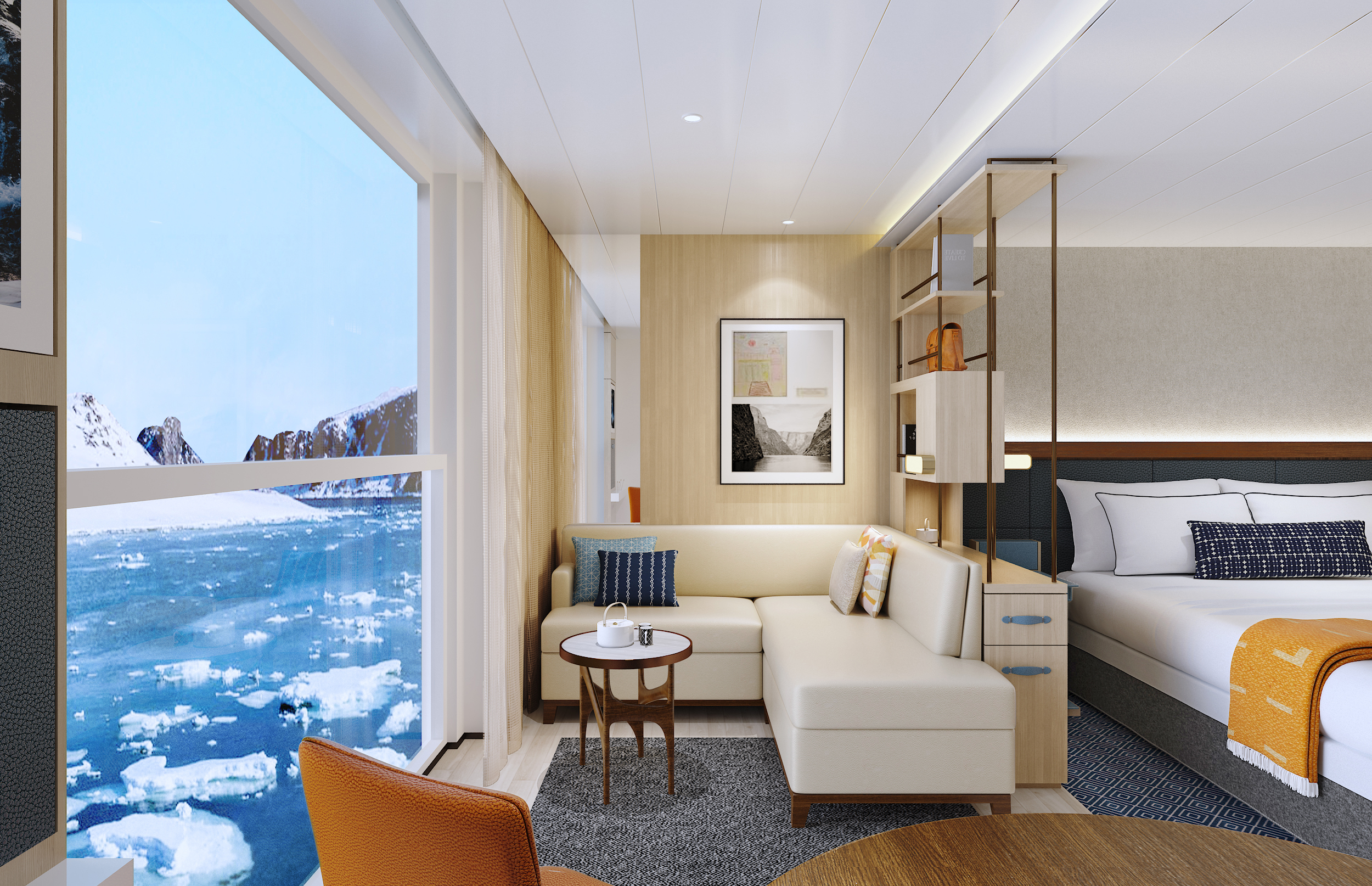 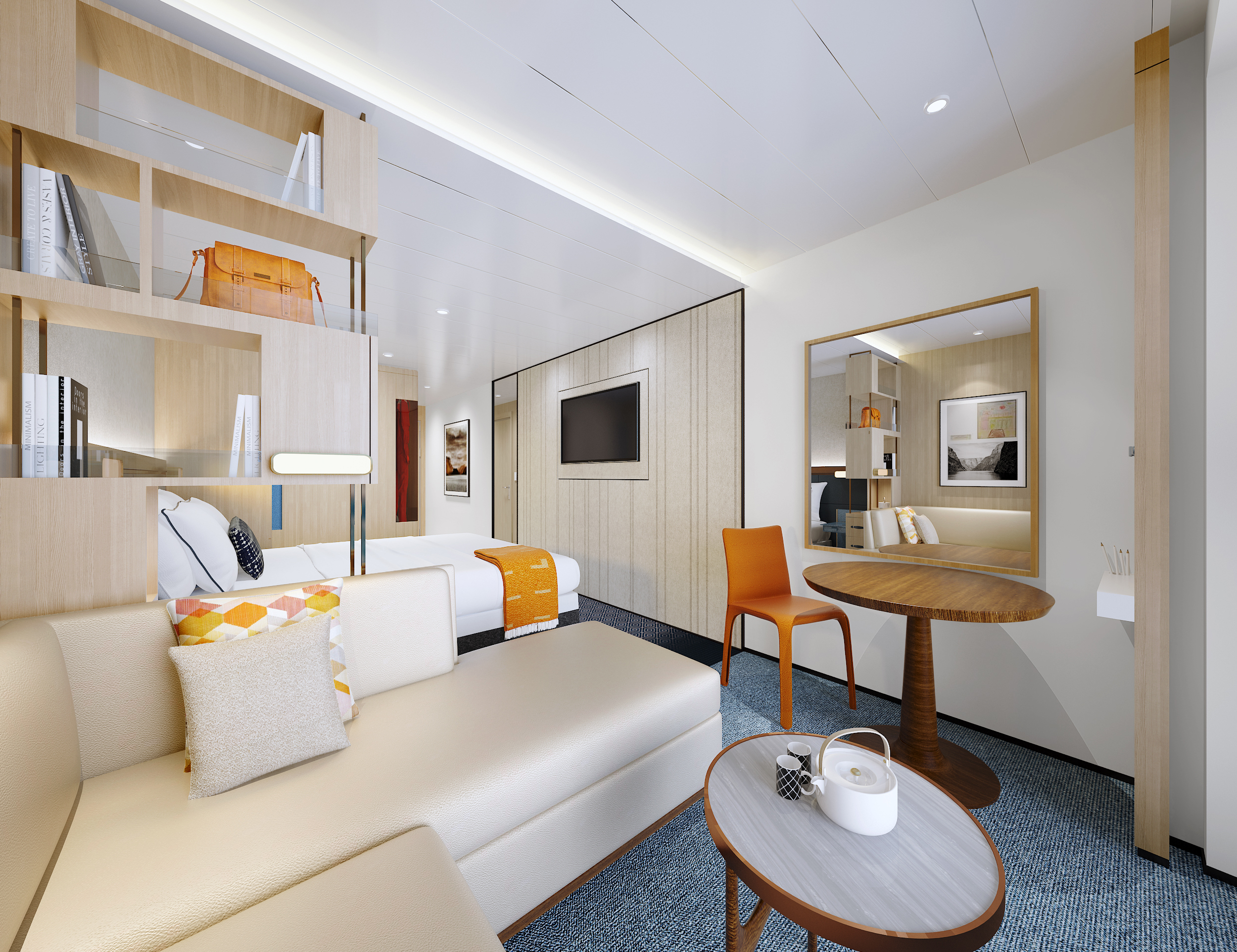 Nordic Balcony: All staterooms on the Viking expedition ships will have a Nordic Balcony, a sunroom that converts into an al fresco viewing platform. The floor-to-ceiling, distortion-free glass at the edge of the ship lets guests take the views in, while keeping the elements out. For fresh air, the top of the panoramic glass lowers to transform the stateroom into a sheltered lookout, with an observation shelf at elbow level to stabilise binoculars or a camera. Six stateroom categories range from 222sq ft to 1,223sq ft – Nordic Balcony, Deluxe Nordic Balcony, Nordic Penthouse, Nordic Junior Suite, Explorer Suite and Owner’s Suite. All staterooms have a king-size bed and large bathroom with glass-enclosed shower, heated floor and anti-fog mirror. There is also a floor-to-ceiling closet to dry and store clothing and expedition gear. 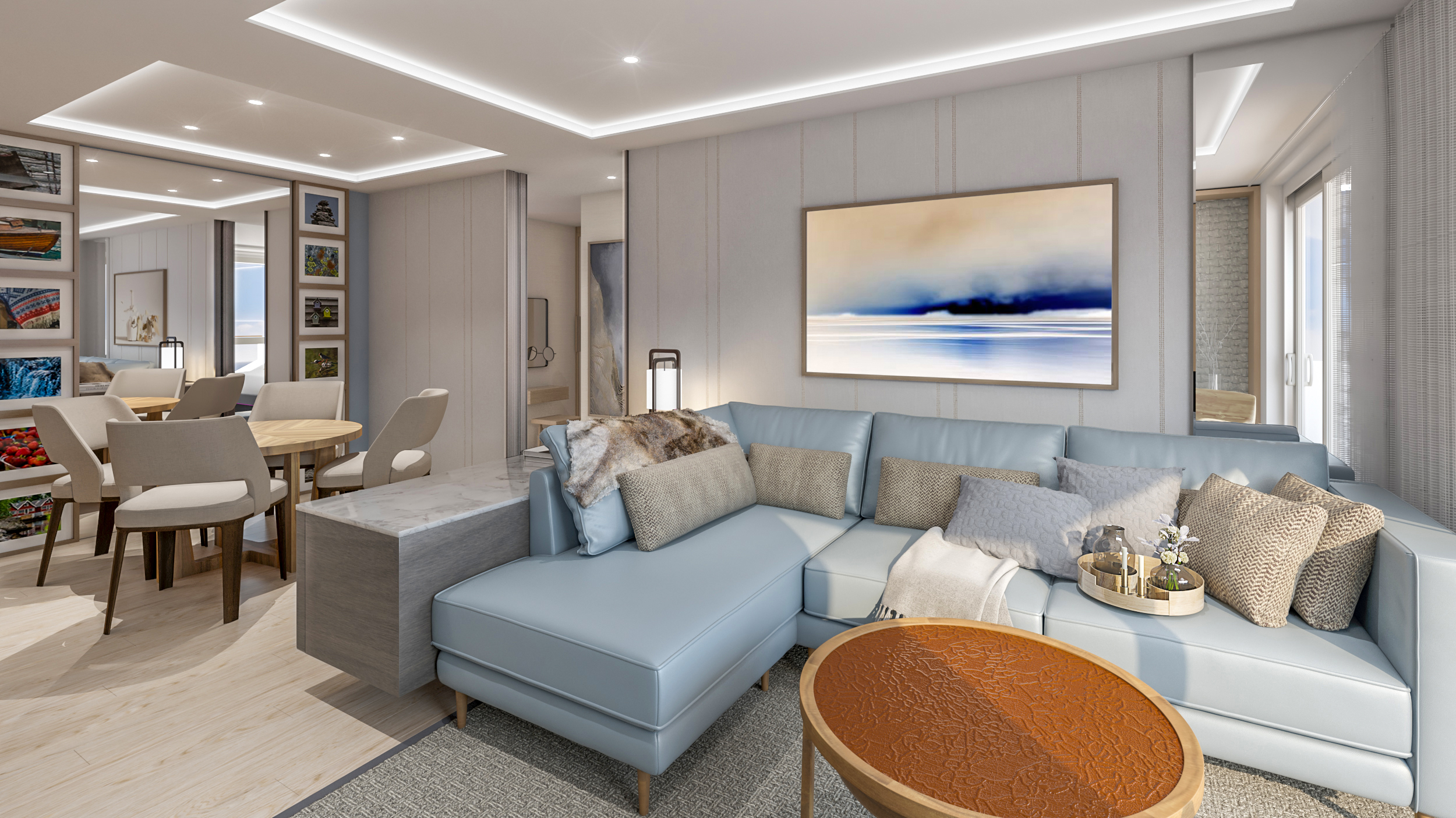 Suites: Nordic Junior Suites and Explorer Suites rival those on Viking’s ocean ships, with extra storage and seating, an expanded bathroom with double sinks, welcome champagne, a fully-stocked mini-bar replenished daily, complimentary laundry and shoeshine services, priority restaurant reservations and more. Explorer Suites have two separate rooms, a Nordic Balcony and outdoor veranda. Explorer Suite guests also have access to the Explorer Suites Garden on the top deck. Each ship also has one Owner’s Suite, which is twice the size of the Explorer Suites. As well as a bedroom it has a living room with six-seat dining table. 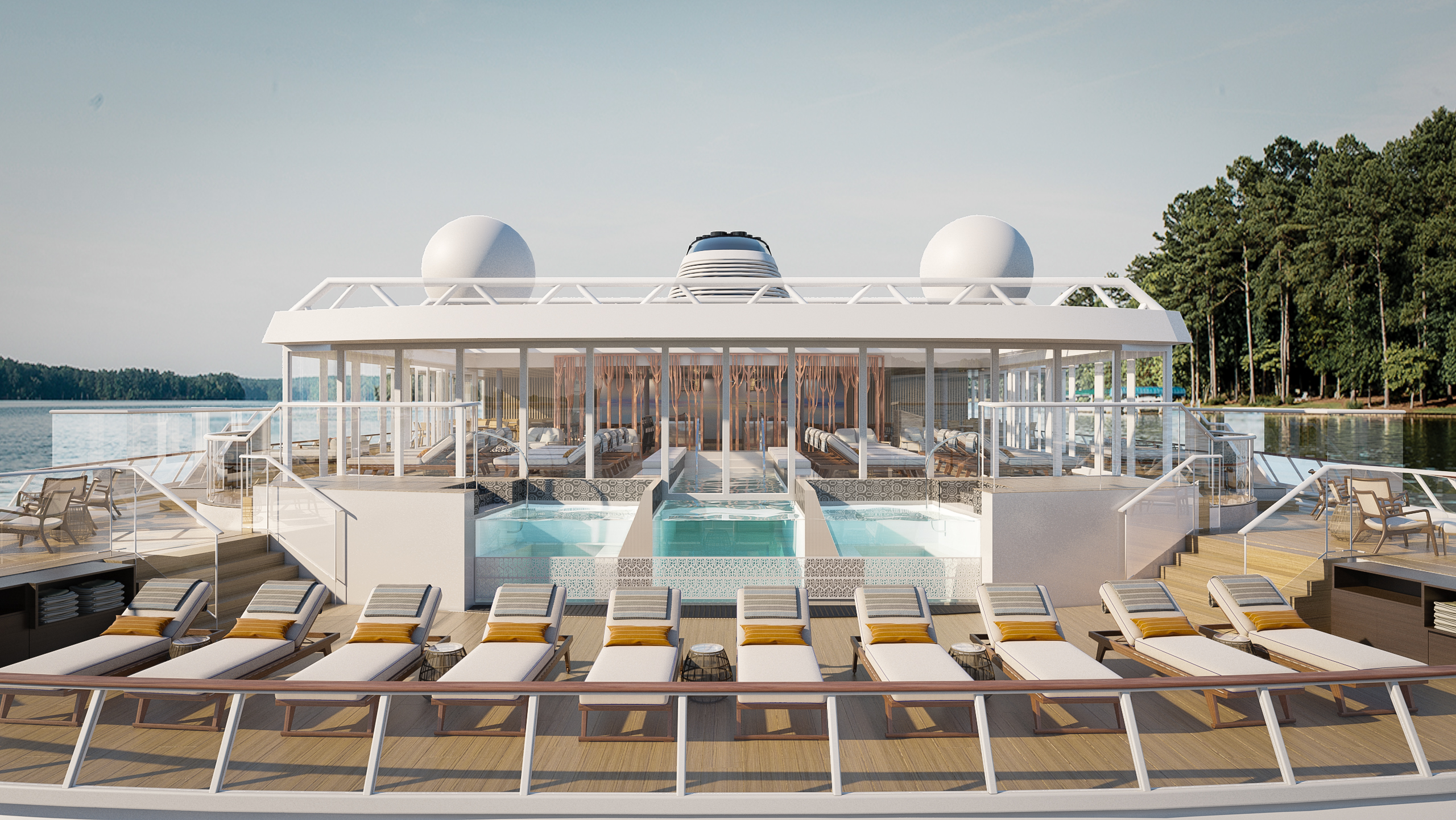 Aquavit Terrace & Pools: With a retractable glass dome, this indoor-outdoor heated sanctuary will allow guests to be surrounded by their destination as they swim and lounge in three temperature-controlled pools, including an ‘inside-out’ swimming experience. 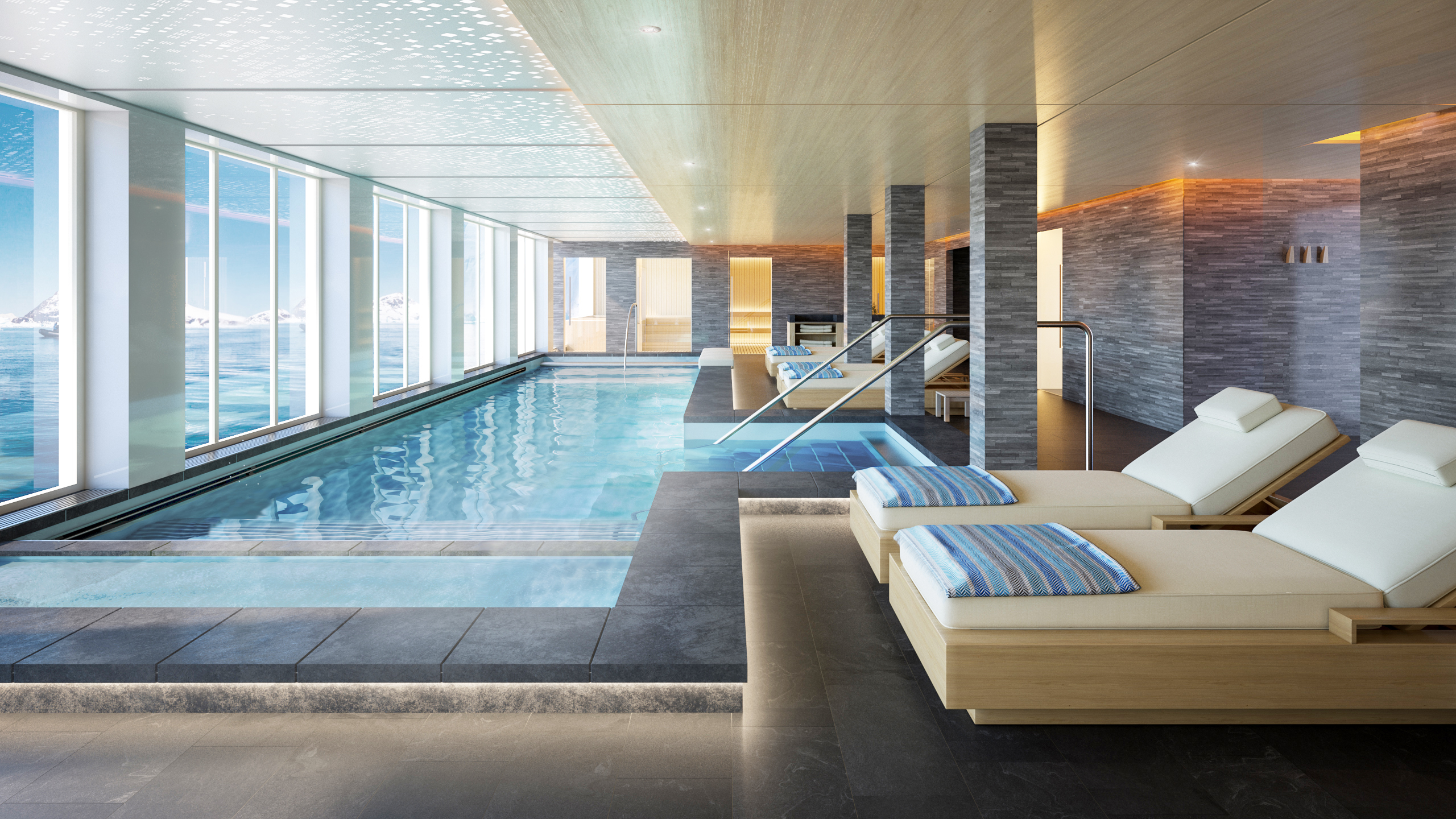 Nordic Spa & Fitness Centre: The Nordic Spa is designed with the holistic wellness philosophy of Scandinavia in mind – it has a thermal suite with a sauna, snow grotto and chaise lounges, as well as a warm hydrotherapy pool and hot tub, surrounded by floor-to-ceiling windows. A fitness centre will provide the latest equipment and workout gear.

Height of luxury: The upper deck of the Explorer’s Lounge (Picture: Viking)

Explorers’ Lounge: Like Viking’s ocean ships, Viking Octantis and Viking Polaris will have a two-deck Explorers’ Lounge at the bow, with views of the scenery through double-height windows.

Dining choices: Viking’s expedition ships will offer dining options based on venues from the line’s ocean ships. The Restaurant will offer fine dining featuring regional cuisine and always available classics; the casual World Café will be a new ‘market’ concept with an open kitchen, bakery, grill and premium seafood and sushi choices, as well as a wide range of international flavours. Mamsen’s, named after the Hagen family matriarch, serves Scandinavian-inspired fare while Manfredi’s offers Italian cuisine. Round-the-clock room service will be complimentary for all guests.

The Laboratory: The ships will also be working research vessels with a team of scientists – including from the University of Cambridge – working on a variety of studies. The Laboratory, which is in a glass-enclosed mezzanine above The Hangar, will have a sample processing area, fume cupboard, freezer and cool storage, microscopes and other instruments. Guests will have supervised access to participate in primary research. 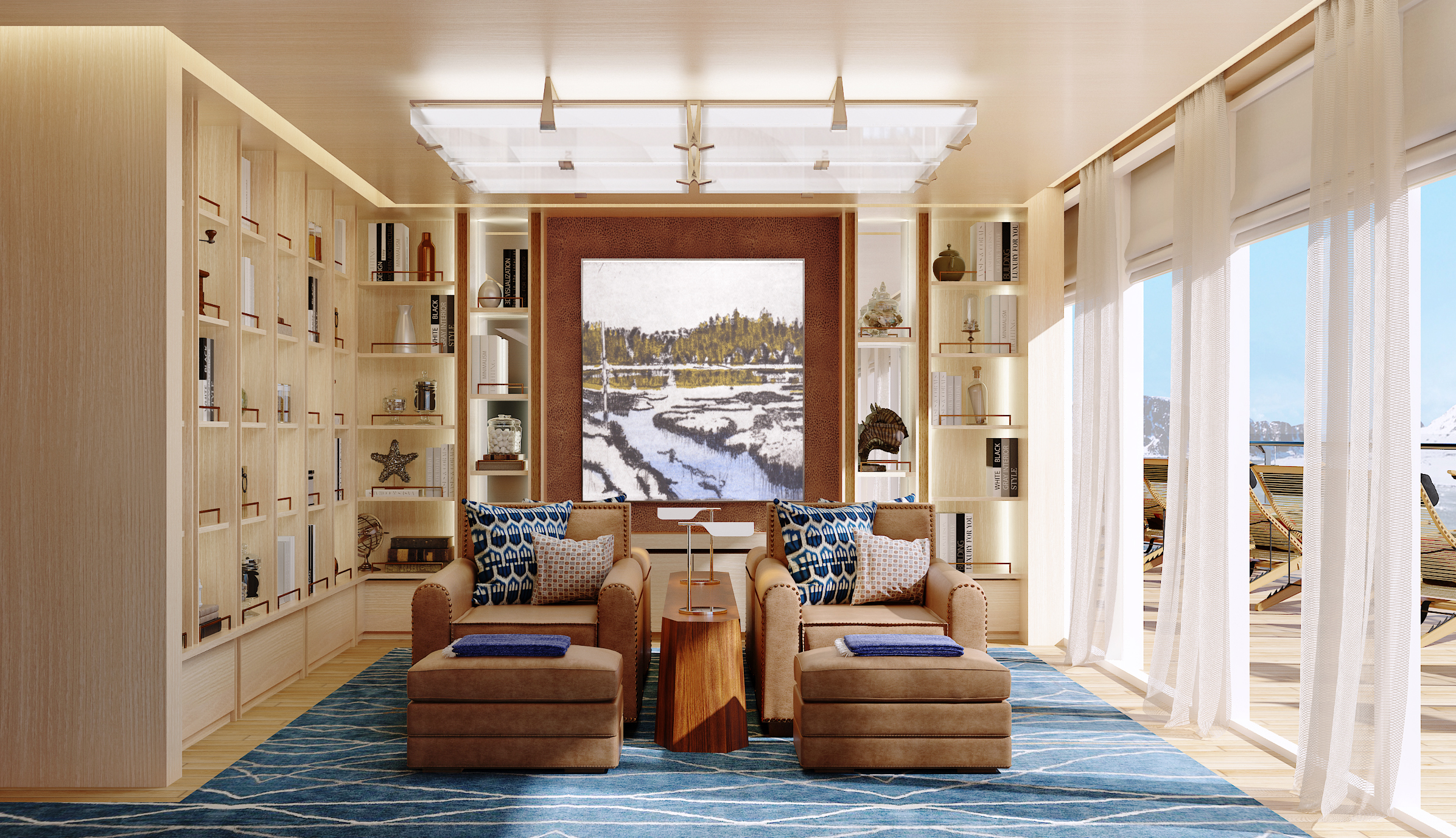 Enrichment on board and on shore: More than 25 experts will accompany each cruise – the expedition team (expedition leader and staff, photographer and submarine pilots) and resident scientists (biologists, botanists, geologists, glaciologists, oceanographers, ornithologists, polar experts and researchers). Guests will be offered daily briefings and lectures about their destination and be able to help in fieldwork during landings – such as monitoring birds to help identify migratory patterns, accompanying scientists to collect samples, or taking their cameras ashore alongside a professional photographer to learn how best to capture scenic landscapes.

Sustainable features: Viking says it is pledged to minimise environmental impact and meet the most stringent emissions and biosecurity standards. The ships’ straight bow reduces fuel consumption while a dynamic positioning system lets the ship hover over the seabed without damaging pristine environments. 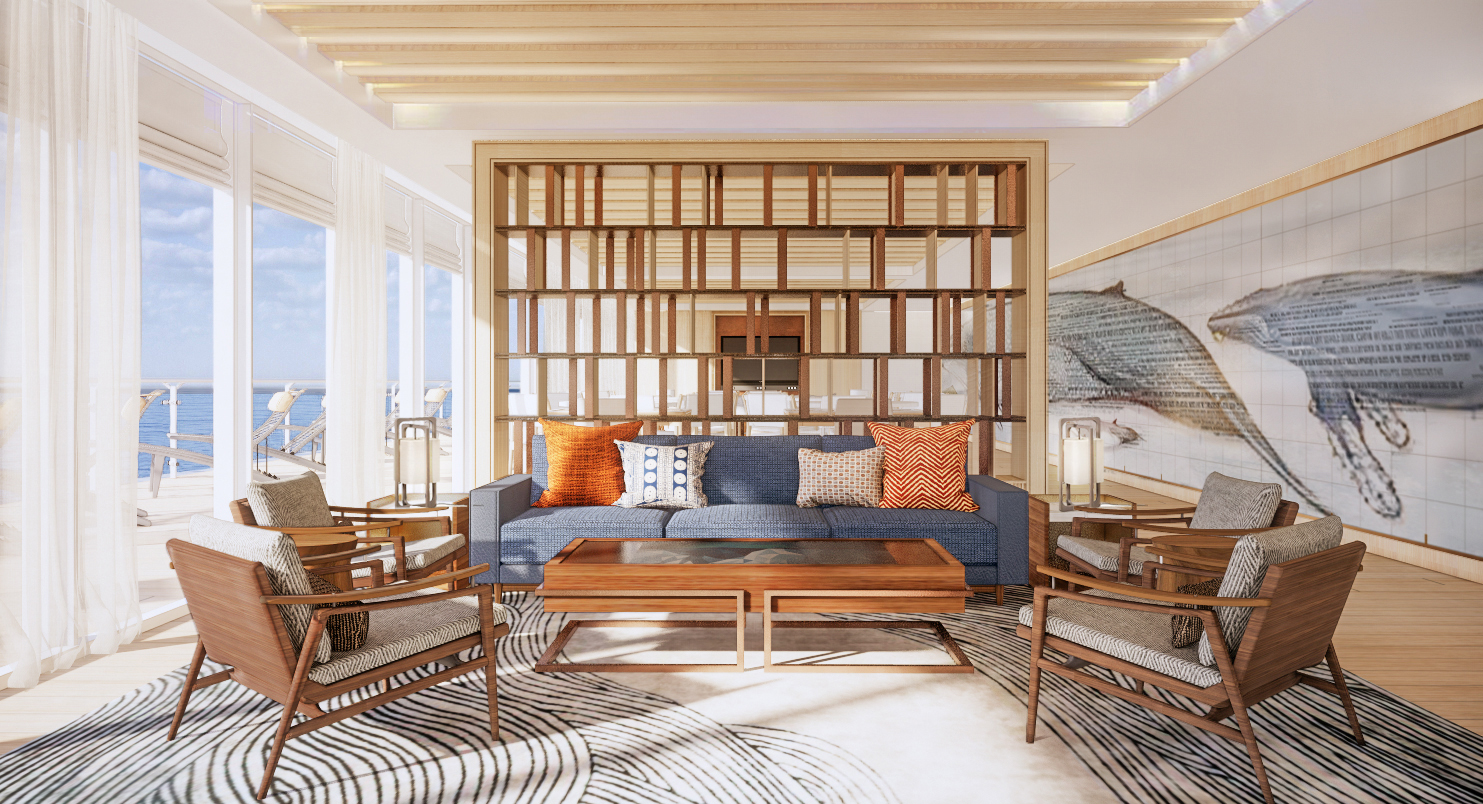 The godmothers of the two ships will be Liv Arnesen for Octantis, and Ann Bancroft for Polaris – two explorers who became the first women to ski across Antarctica in 2001.

Viking is a growing company. In the last eight years alone it has introduced more than 60 new river ships and six ocean ships to become the largest small-ship cruise line with a fleet of 79 river and ocean vessels around the world.

Torstein Hagen said: ‘We began as Viking River Cruises then we evolved into Viking Cruises with the addition of ocean cruises. Today we stand singularly as Viking, offering destination-focused voyages on more than 20 rivers and five oceans, visiting more than 500 ports in 100 countries and on all seven continents.’

In 2020, Viking will launch seven new river ships. Six more ocean ships are on order, with options for a further four, which would bring the ocean fleet to 16 by 2027.

Bookings for the two expedition ships open today. Prices for polar expeditions start at £10,995 per person while Great Lake itineraries are available from £5,795 per person.

The announcement confirms a story I first wrote in April, 2018. 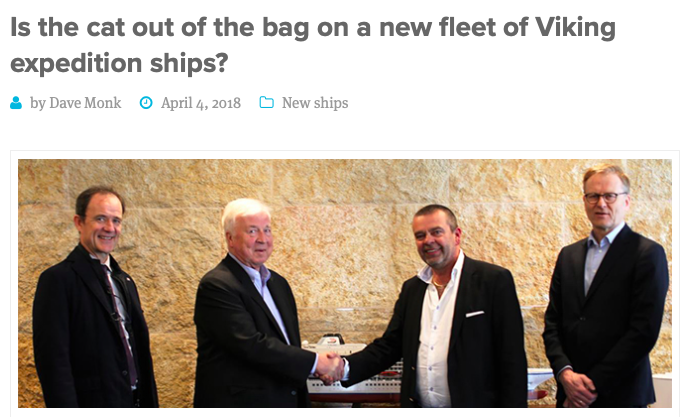 Confirmed: The story I wrote in April 2018

3 thoughts on “Vikings head to the poles: Cruise line announces details of new expedition ships (with two submarines each)”