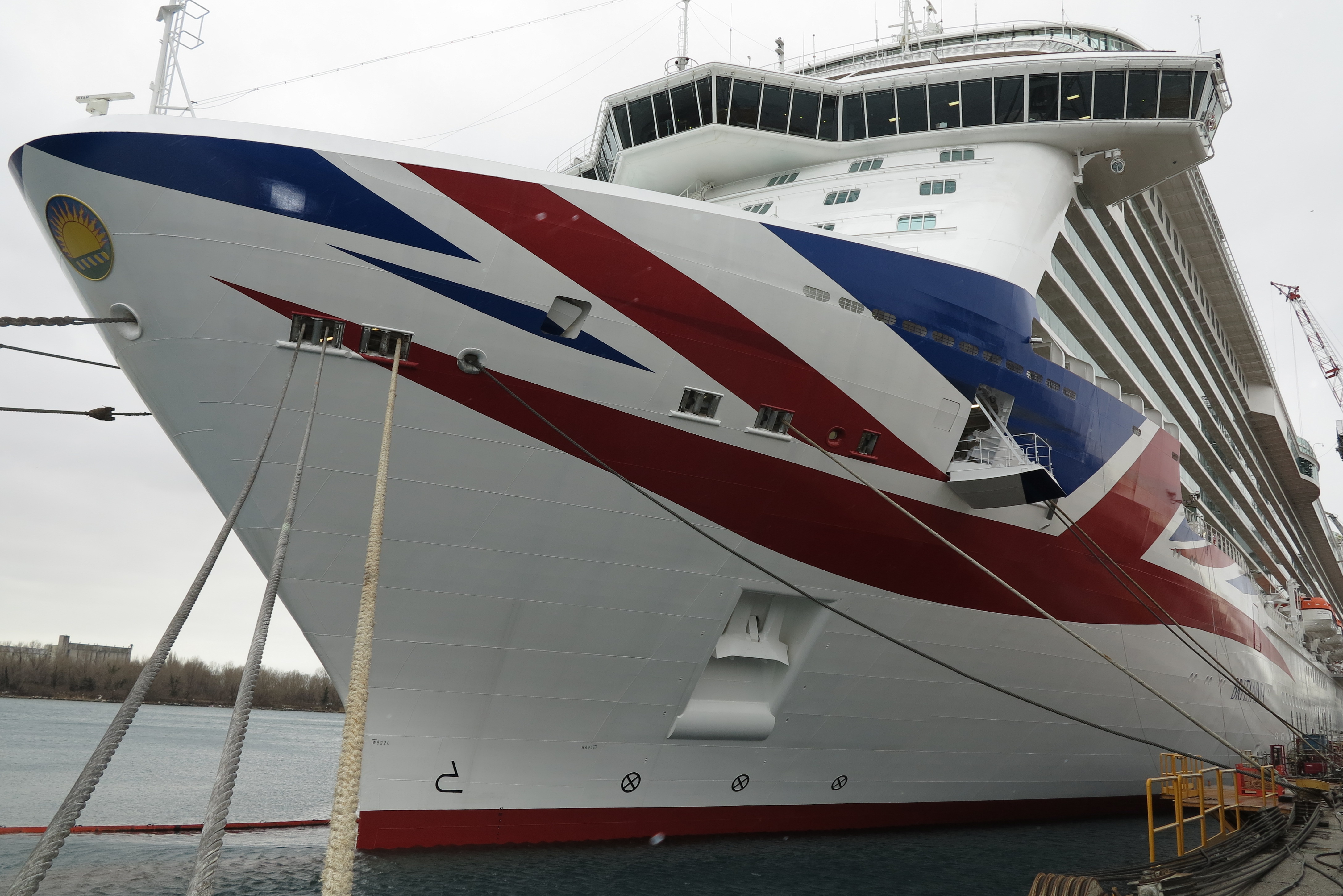 Flying the flag: Britannia in Trieste

I visited a large, chic new hotel today. I tell a lie, it was a cruise ship, but you could easily be mistaken, especially when it is stationary. 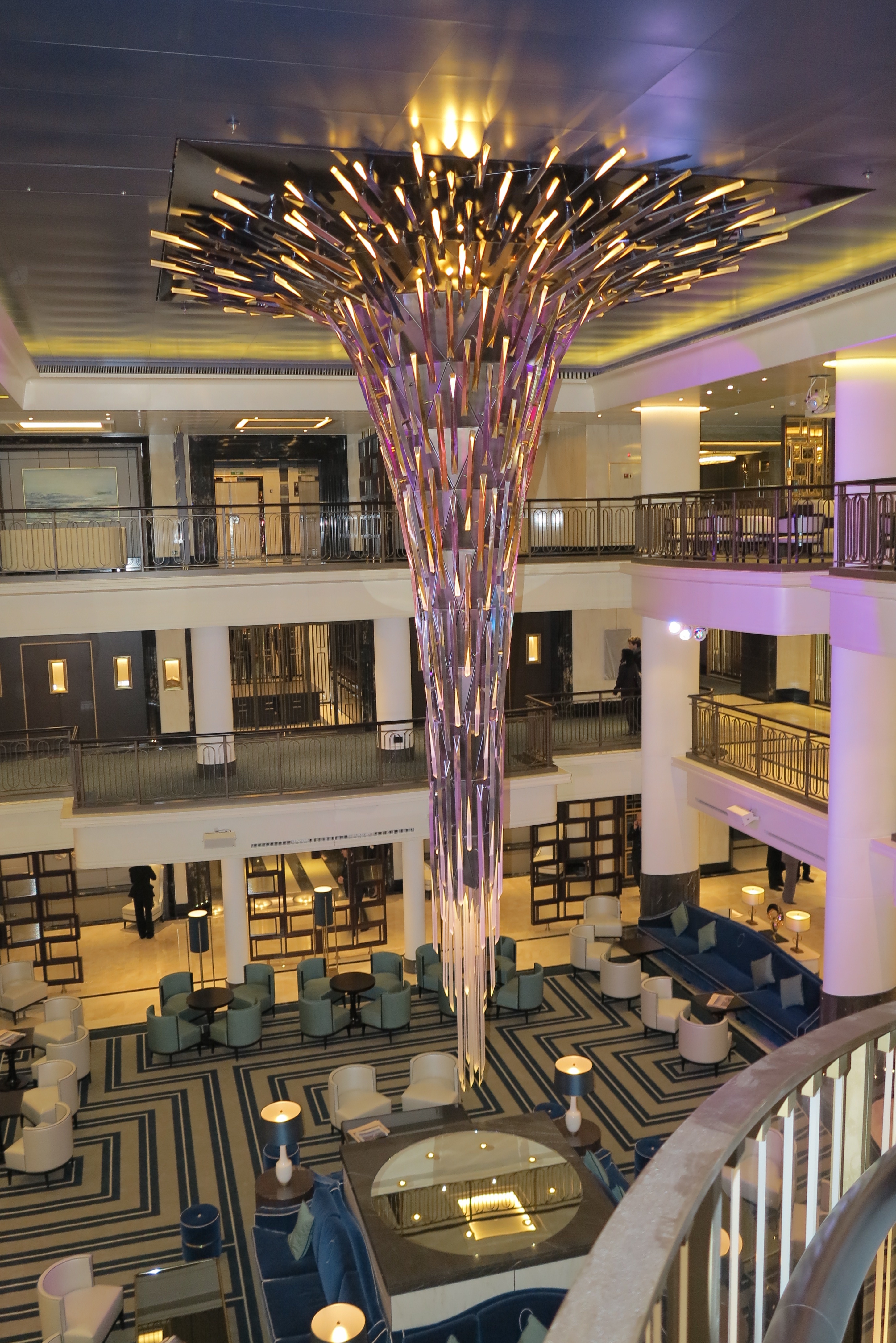 Star feature: The Star Burst sculpture in the atrium

The cool, sleek design of the stunning atrium, elegant restaurants and spacious bars of P&O Cruises’ new flagship Britannia lures you into thinking you’re visiting a fashionable venue in London or New York – the colours are predominantly cream and brown with some blue or flashes of other colours. 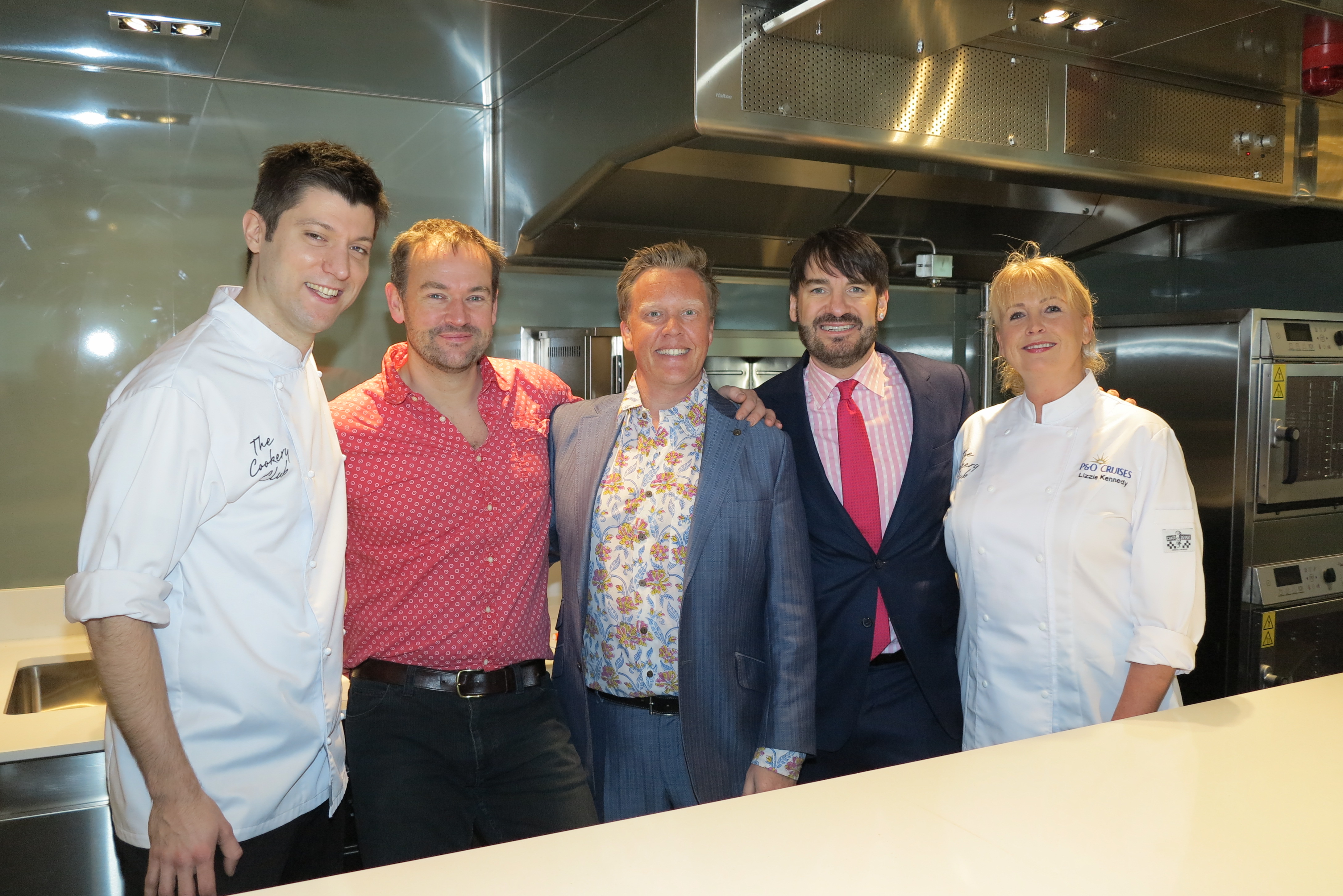 I toured the gleaming new vessel at the Fincantieri yard in Trieste, Italy, on the day it was handed over from the builders to the cruise company. Also on the trip were two of Britannia’s ‘food heroes’ – wine expert Olly Smith and patissier Eric Lanlard – as well as the ship’s cheese guru, Charlie Turnbull. 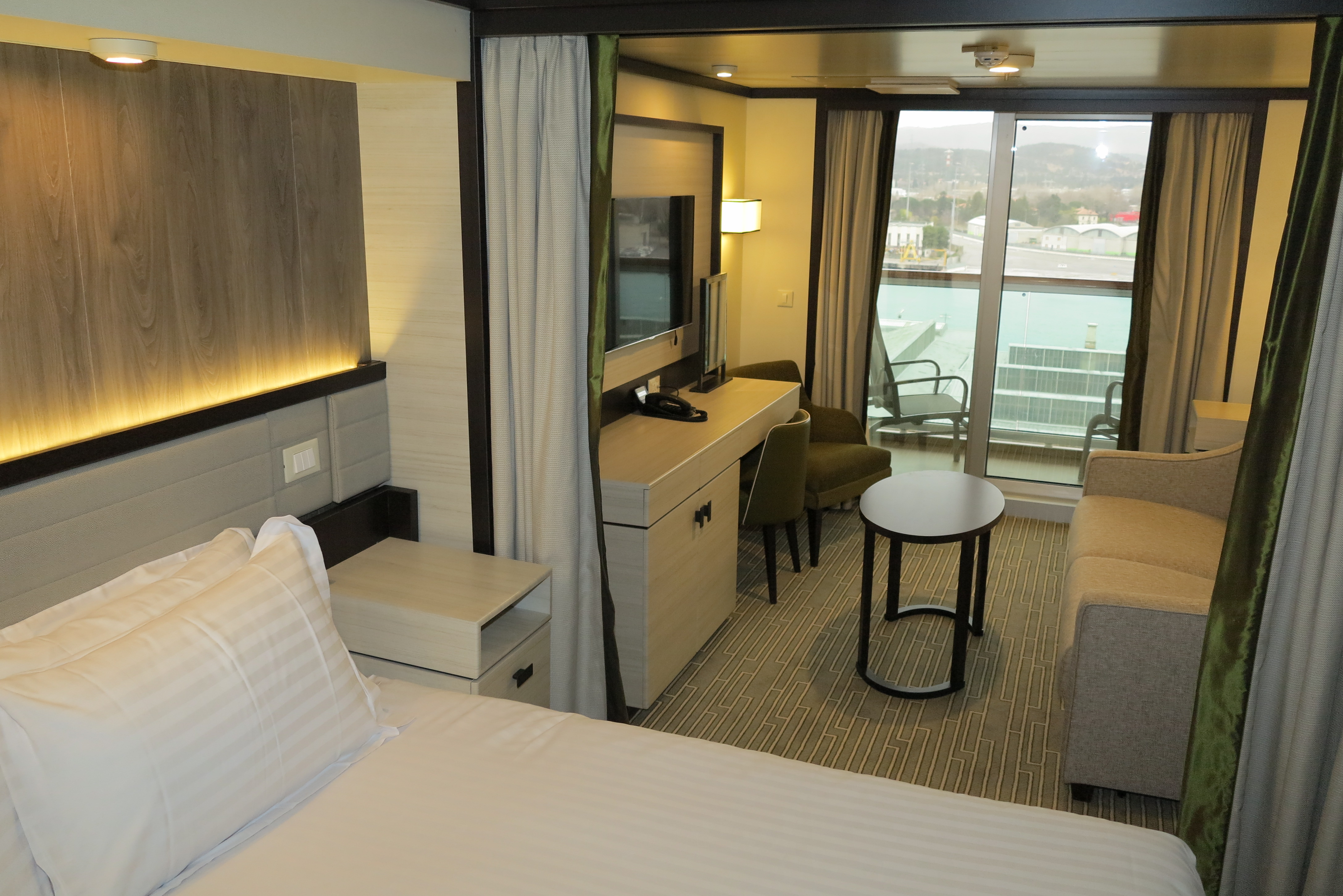 And so to bed: A superior deluxe balcony cabin on Britannia

Everyone appeared to be impressed with the interior design by hotel consultants Richmond, who said in a statement: ‘The interior design originates from P&O Cruises’ heritage, with a quintessentially British sense of style and glamorous, classical touches; yet it incorporates innovations and concepts in dining, technology and entertainment to appeal to new audiences, as well as resonating with P&O Cruises’ loyal customer base.’

The 141,000-ton Britannia, described by senior P&O Cruises executives as ‘99.9 per cent finished’ will be christened in Southampton, its home port, next month. Rumour has it that the Queen might be the godmother [this has now been confirmed]. 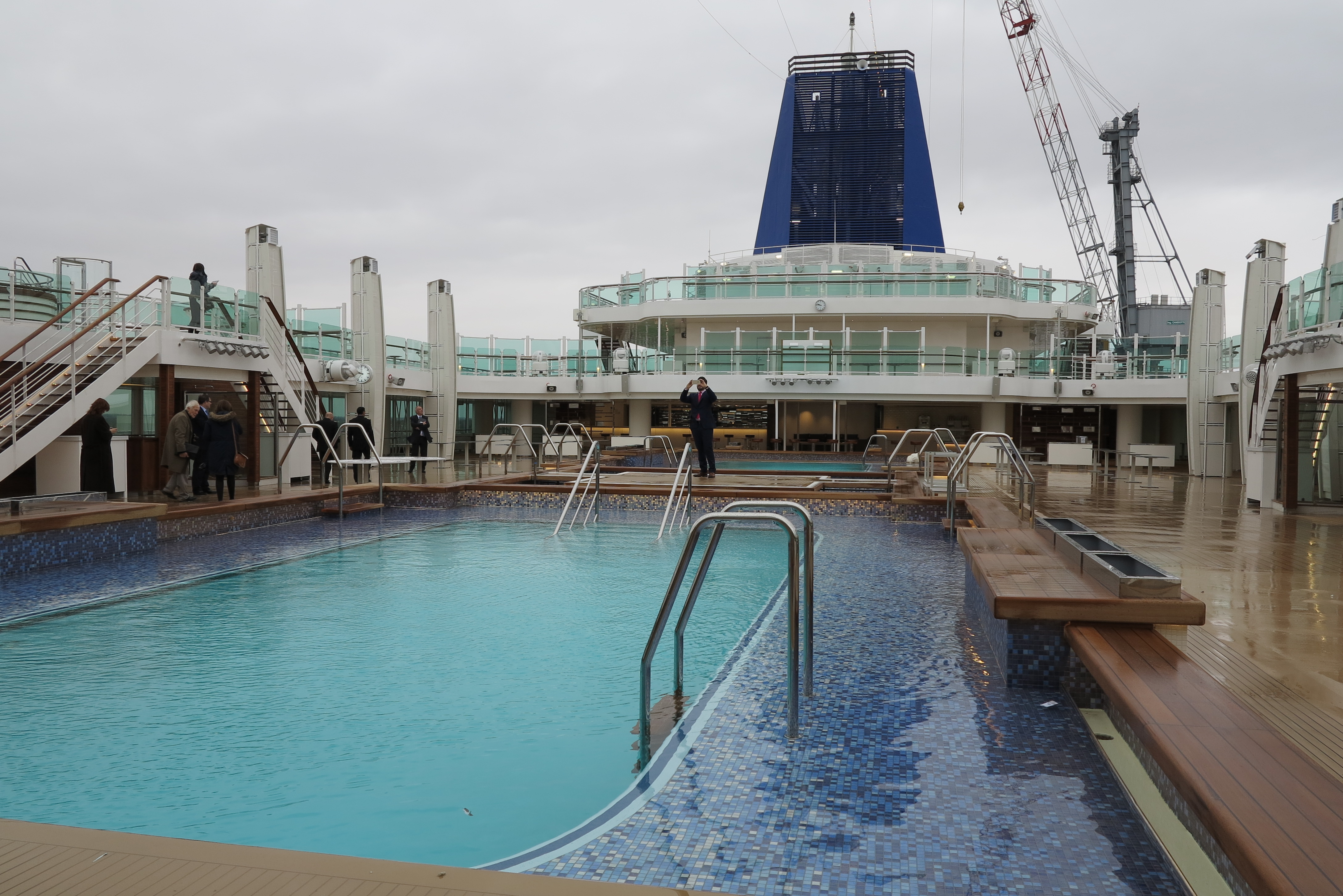 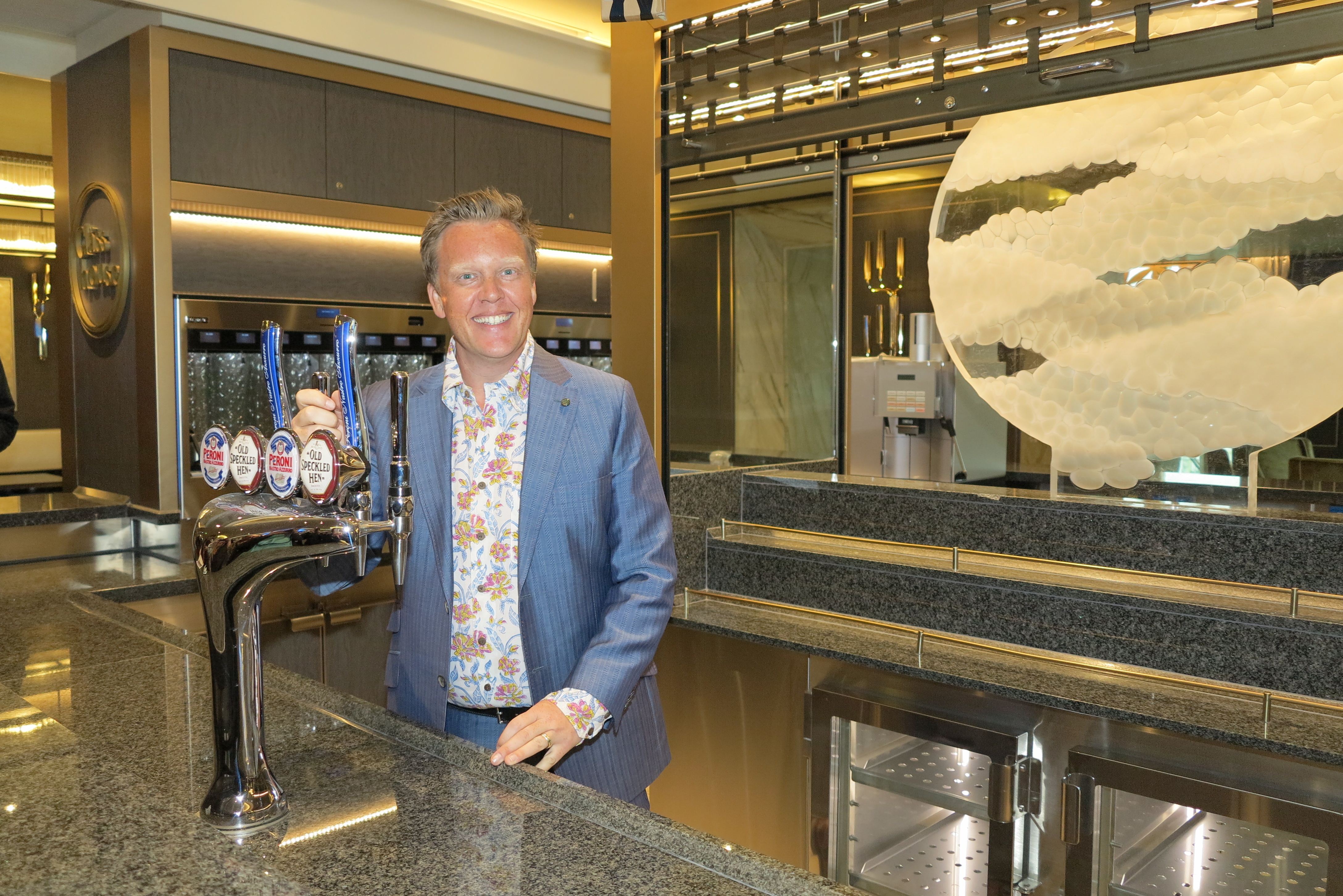 Olly here for the beer: Olly Smith will serve Harvey’s ale in the Glass House

There are many nice, British touches. such as a wide selection of gins as well as beers from 56 counties. Olly Smith is going to be serving an ale from Harvey’s brewery in Lewes, East Sussex, called Jolly Olly – originally created for his 40th birthday. 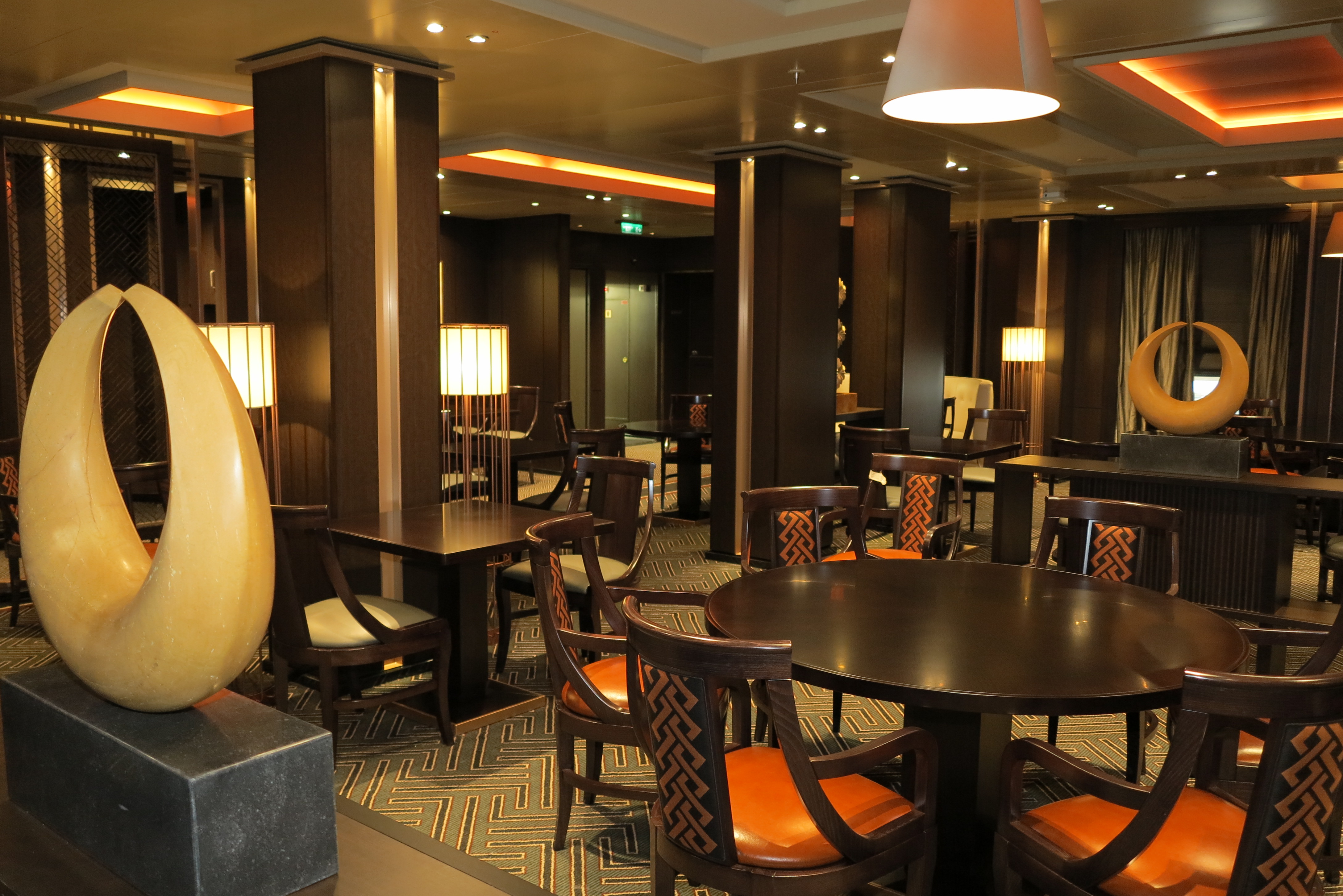 Spicy: The Sindhu Indian restaurant on board Britannia 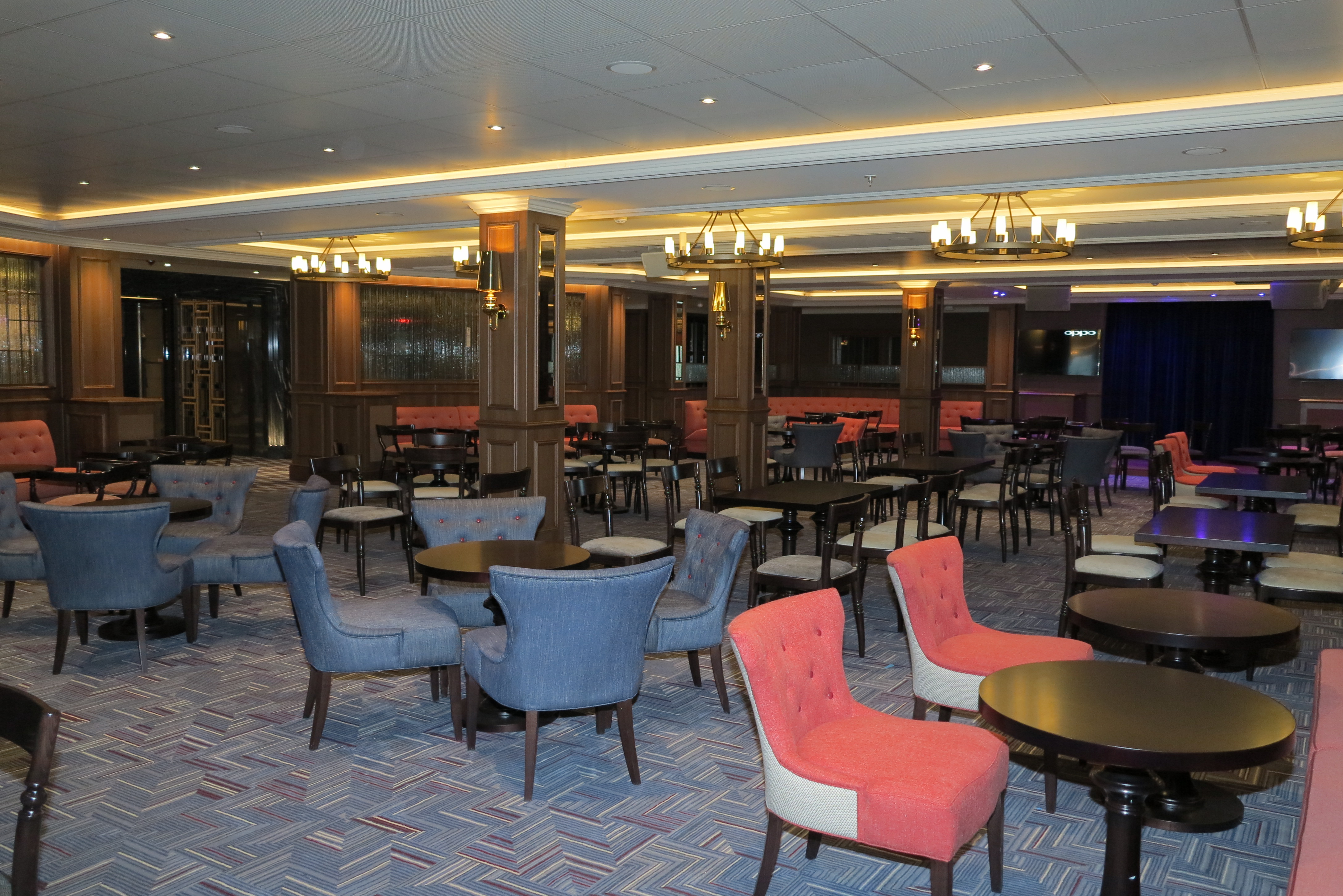 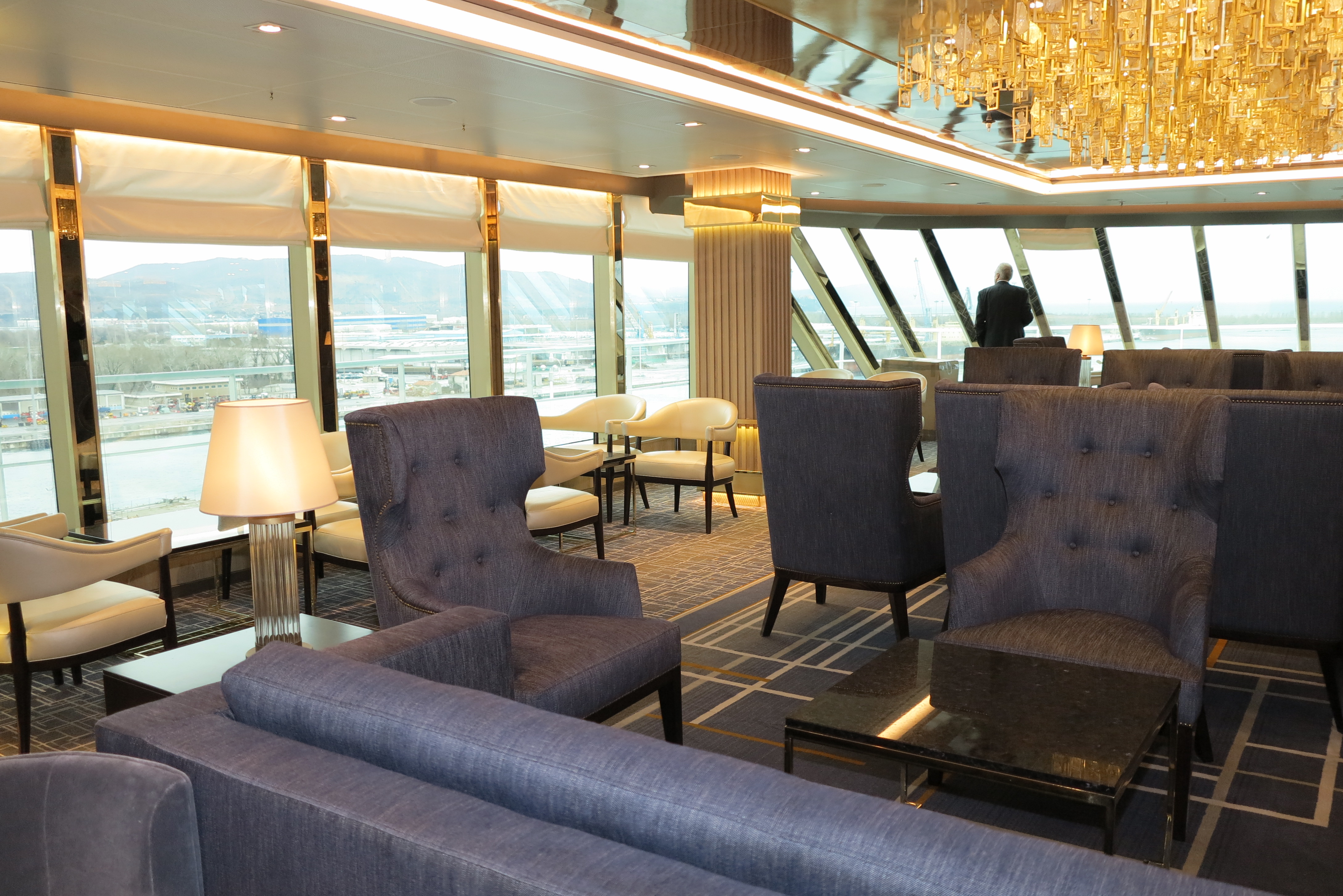 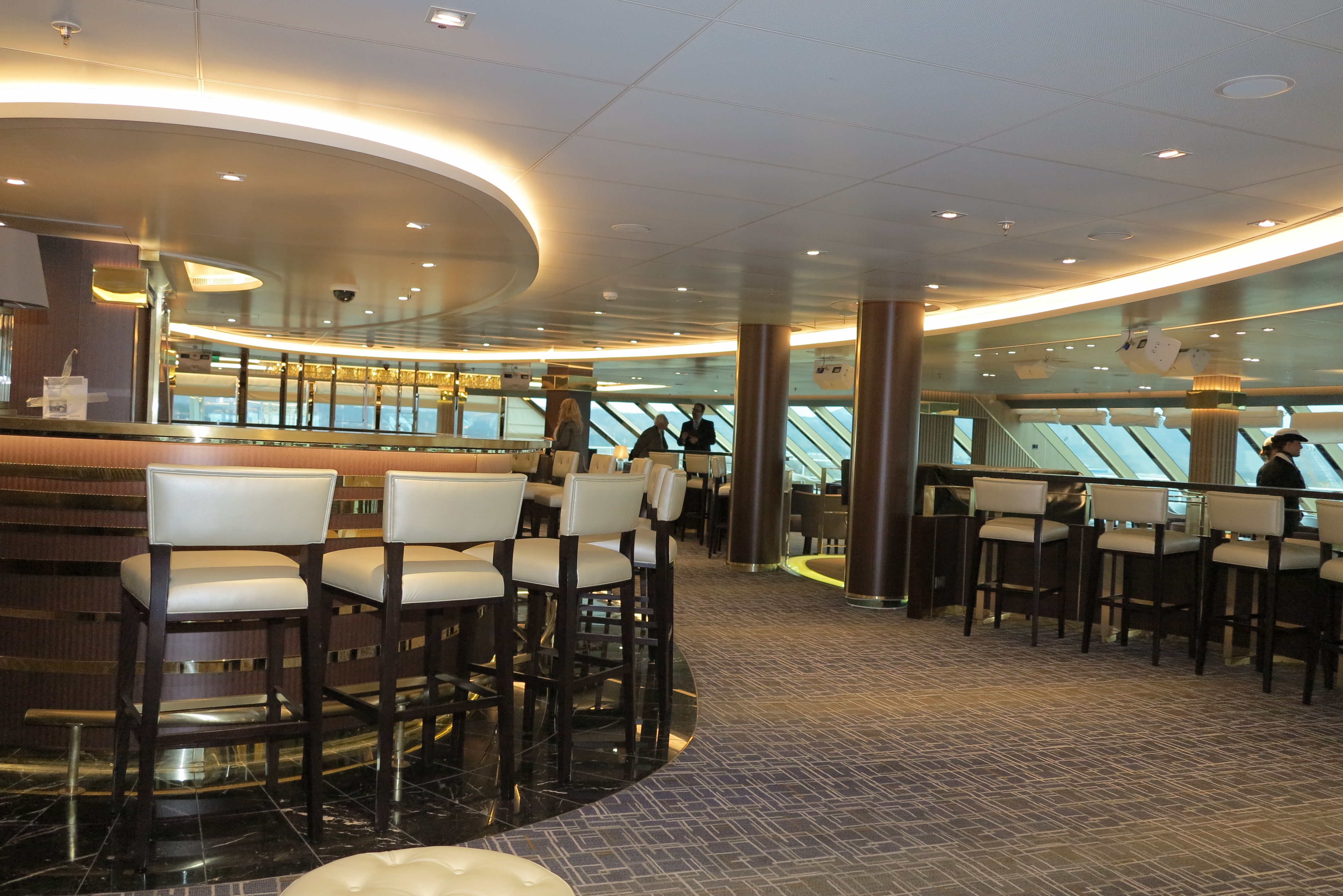 Meeting place: Another shot of the Crow’s Nest

One of the principal attractions on board is a cookery school which will be run by another food hero – James Martin. He and fellow chefs Marco Pierre White and Atul Kochhar – who has a Sindhu restaurant on Britannia – will make occasional appearances on the ship. Olly Smith is certainly hooked, having taken his family on holiday on another P&O vessel, Azura, recently. 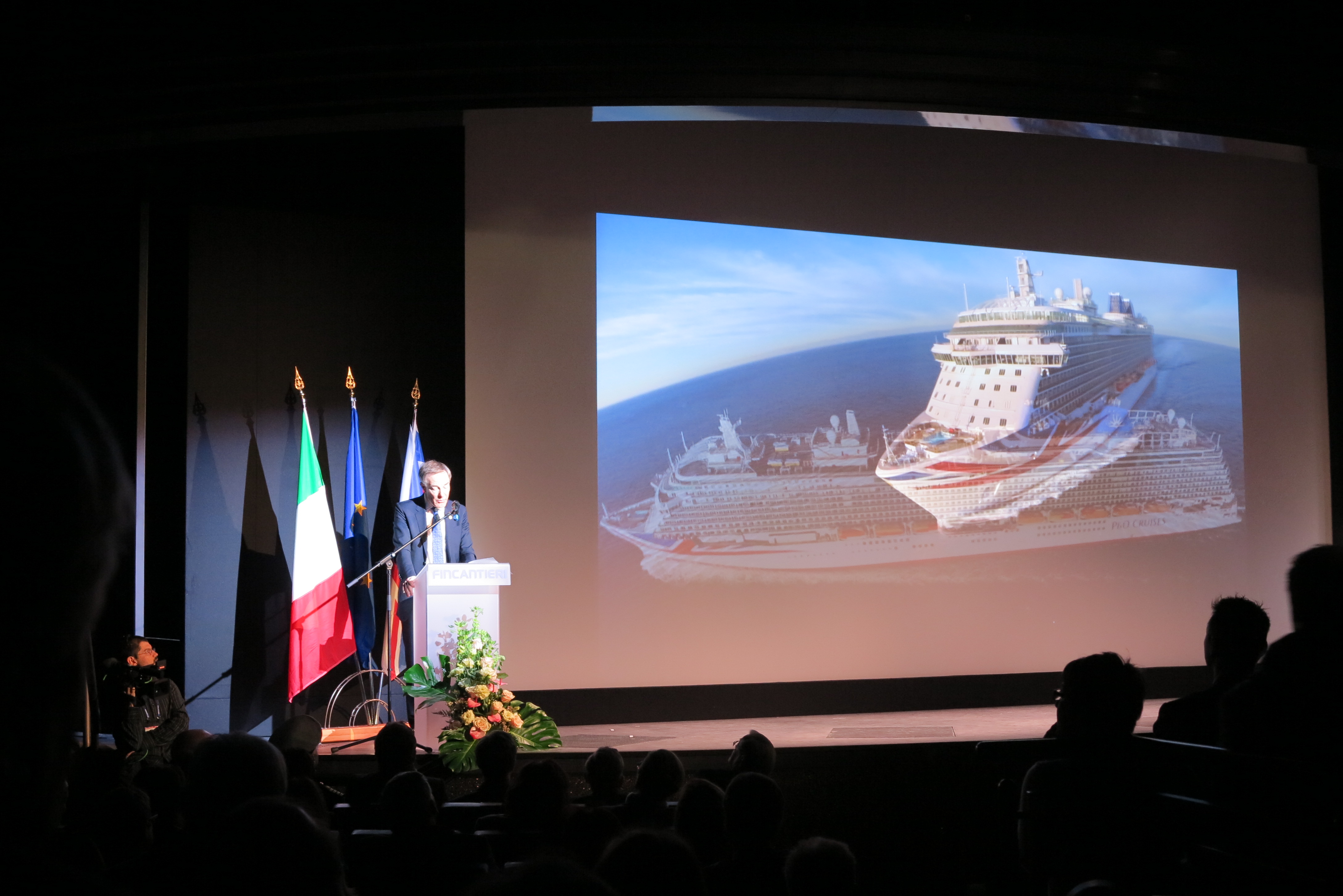 He said Britannia reflected Britain’s fascination with food in its cookery school and dance in its Crystal Room.

And he finished by saying: ‘All of us at P&O Cruises believe Britannia will soon be ruling the waves again.’

3 thoughts on “Britannia: A photo tour of the P&O Cruises flagship at its Italian shipyard”