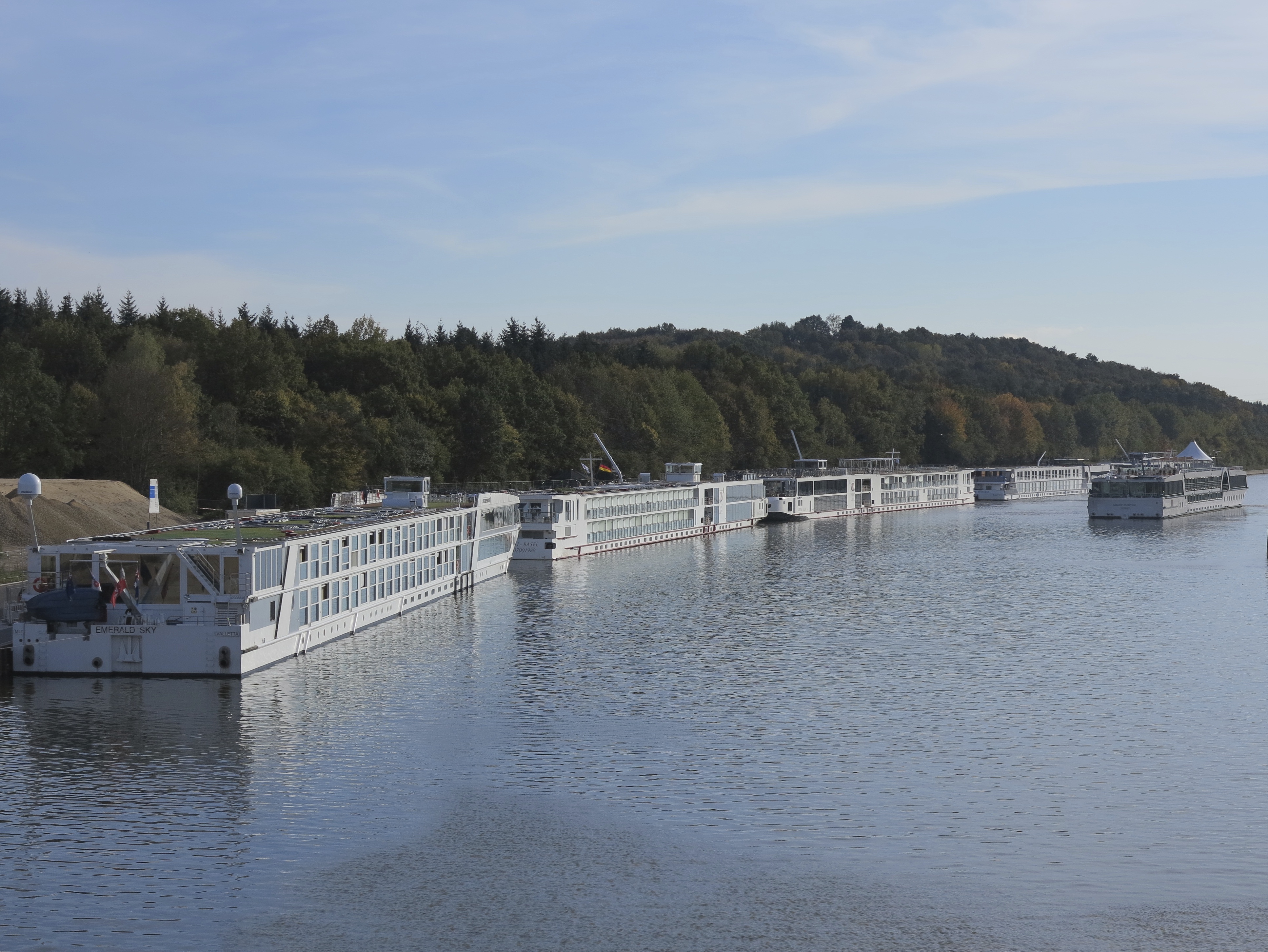 Waiting Hlin line: Our Viking ship at Nuremberg, third from the left

She may not look like a time machine. Launched just a few months ago, the Viking Hlin is gleamingly new, spotlessly clean and unquestionably modern.

But this longship – one of the latest additions to the expanding Viking fleet – has the ability to take you back hundreds of years, to the time of conquerors, kingdoms and castles, as it sails the Danube from Nuremberg to Budapest via Vienna. From the chilling site of Hitler’s rallies to behind the old Iron Curtain, past palaces, monasteries and vineyards, this journey reminds you of some of the worst of human behaviour while displaying nature at its best. 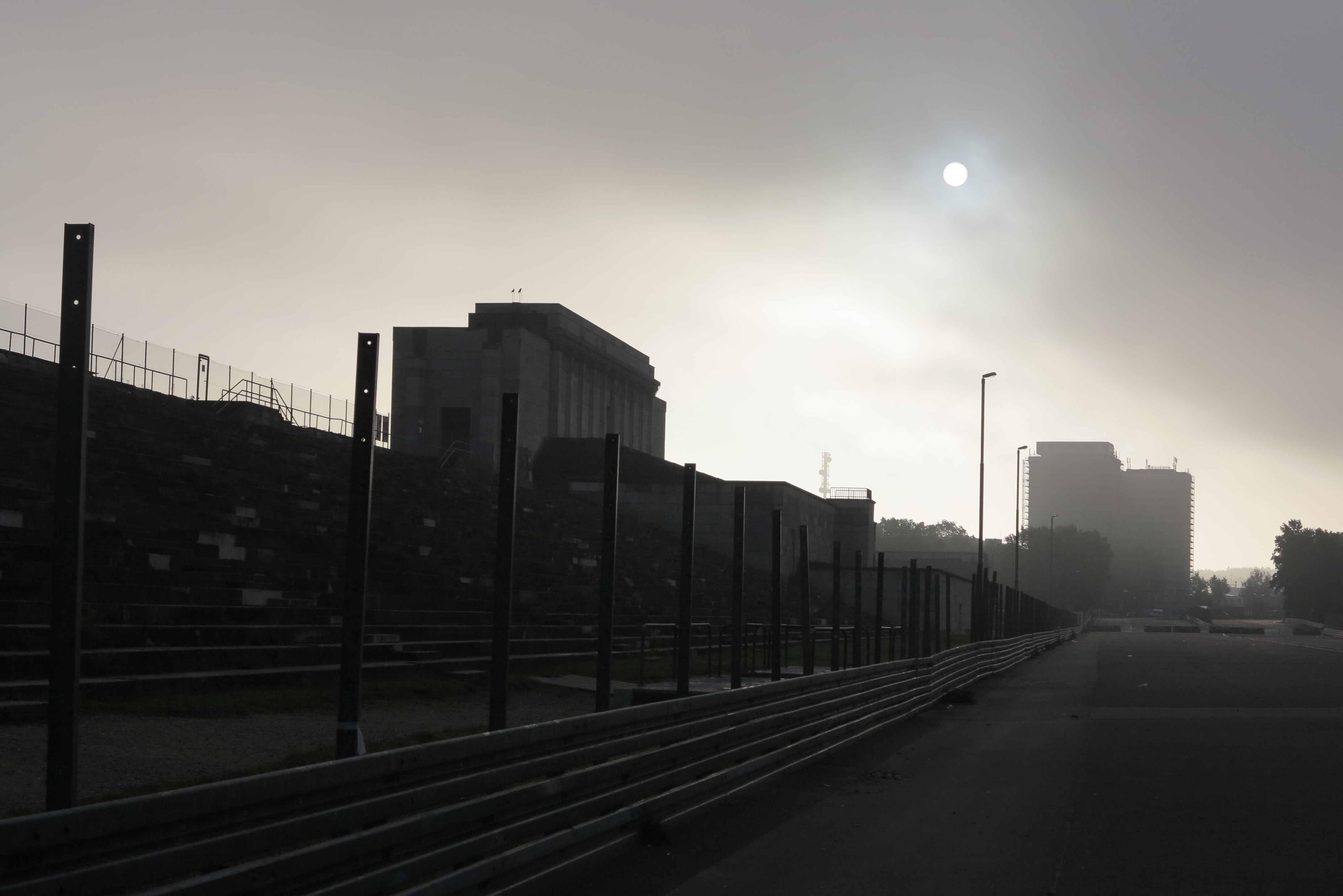 Rallying point: The misty morning adds to the atmosphere as we see where Hitler addressed the Nazi faithful from the podium with the railings

The 190-passenger Hlin glides effortlessly through locks, gorges and valleys, stopping – often overnight – in towns and cities along the way, ending in the heart of the Hungarian capital.

River cruising is all about freedom and flexibility – being offered inclusive tours and optional extra excursions, but being always at liberty just to wander from the dockside to a local bar or restaurant, shopping street or tourist attraction. Dress code is never more than smart casual, though some choose to dress up for the captain’s dinner. Aside from the restaurant, there is a bar and terrace plus a sun deck. And many rooms have their own balcony where you can sit and watch the scenery go by. 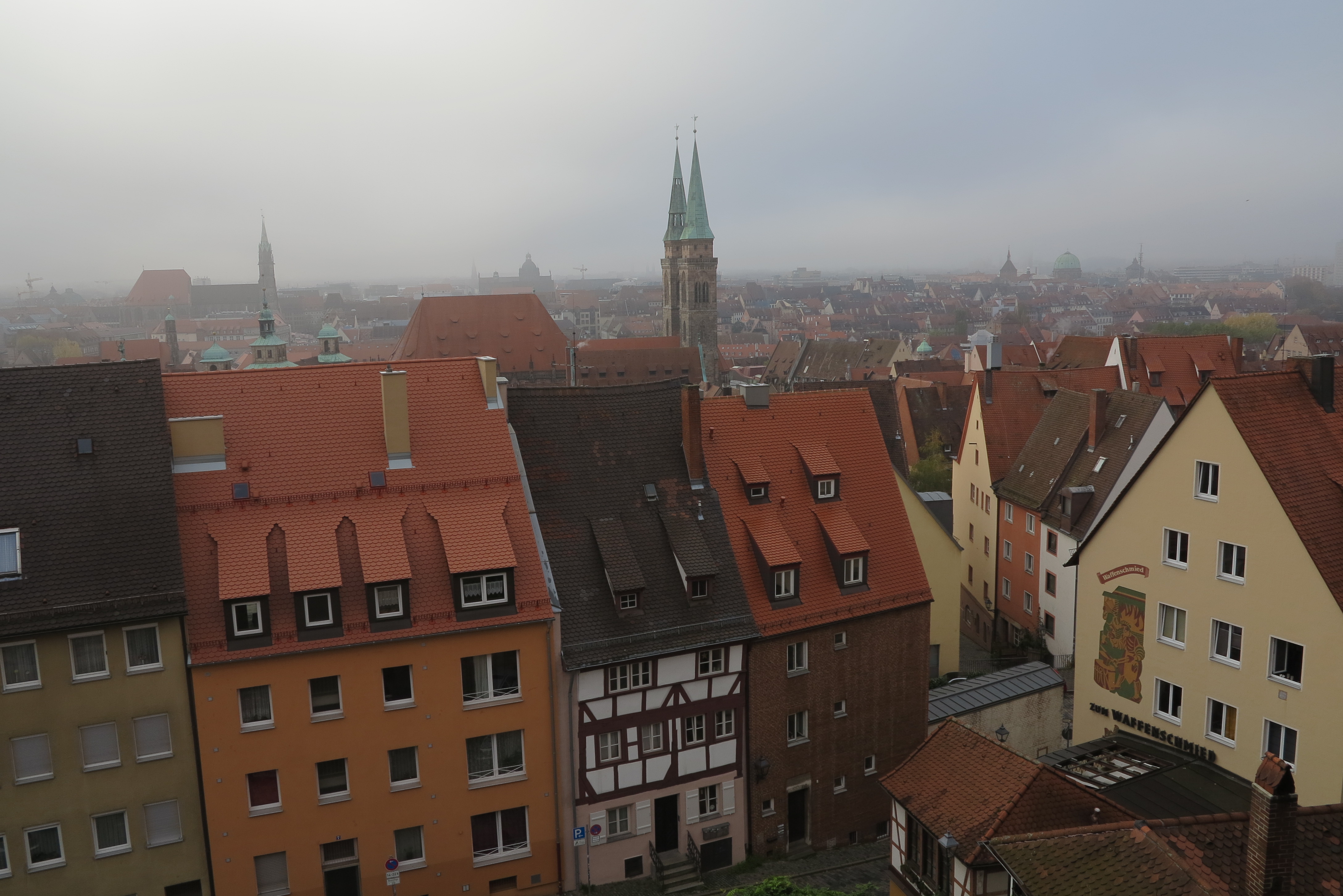 The old town looks the same: Nuremberg viewed from the castle

The Danube – meaning deep water or two waters – is Europe’s second biggest river, running 1,785 miles from the Black Forest in Germany to the Black Sea. Unusually, it flows from east to west, through or along the borders of ten countries and four capitals – Vienna, Bratislava, Budapest and Belgrade. A third of the length is in Hungary.

We began our voyage by flying into Munich for a two-hour transfer to the ship waiting at Nuremberg. After an evening of settling in and meeting the first of many dinner companions, we remained docked overnight so a tour could take us to the scenes of the Nazi rallies and trials. Later, looking over the city from the imposing castle, it seemed hard to believe more than 90 per cent of the buildings were destroyed in the war – even houses in the old town have been faithfully recreated.

Nuremberg, now inevitably linked to World War II, is nearly 1,000 years old and produced the first pocket watch and globe. Toys have been made here since the 14th century and 100 years ago there were still 250 factories producing everything from spinning tops to teddy bears. One of the more interesting stops is still the toy museum. 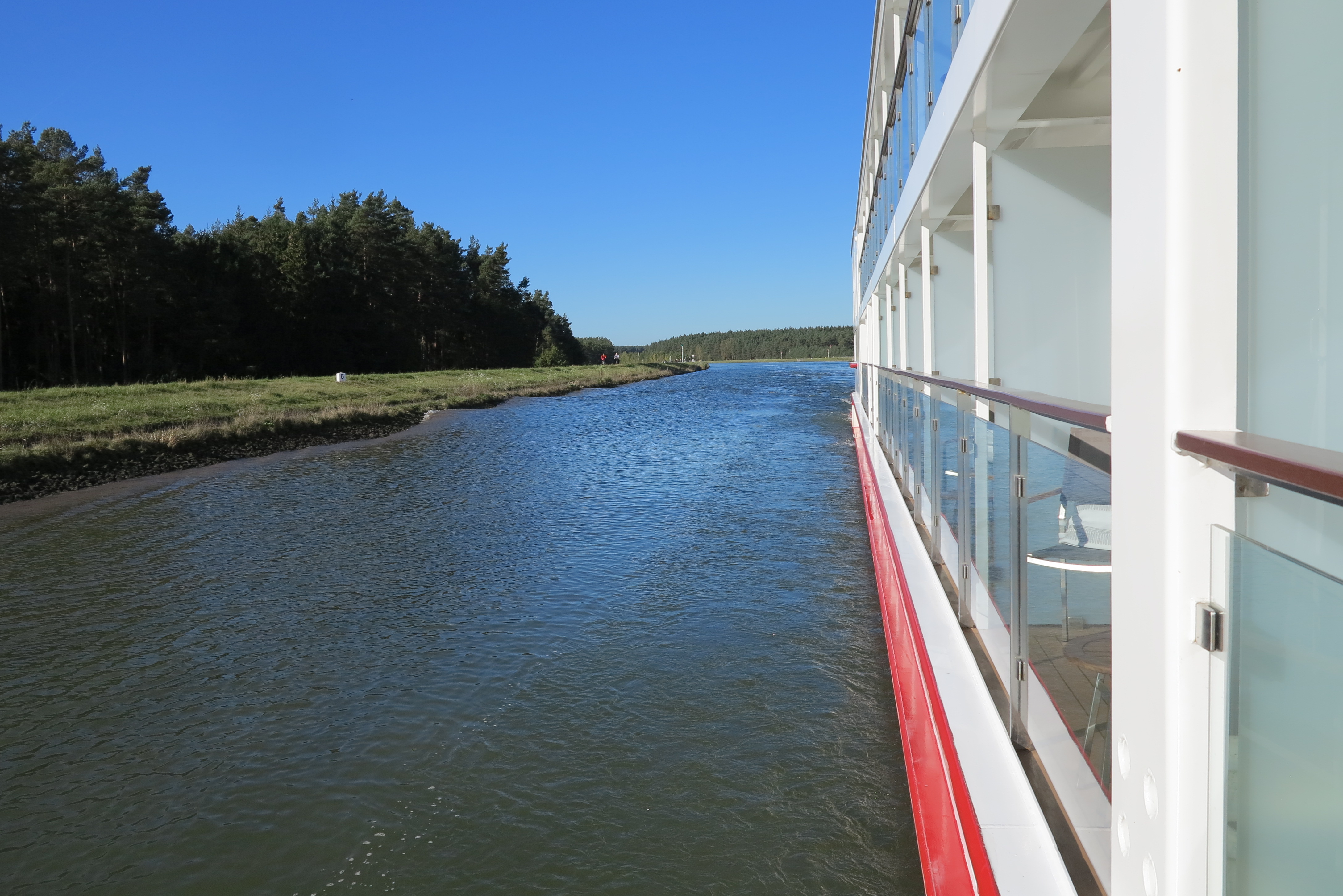 By the afternoon we were sailing the serene 106-mile-long Main-Danube canal, facing the first of 16 locks that raise the water to 1,332ft – the highest point of any European waterway. There’s barely an inch between the side of the ship and the lock wall as the water fills up and the ship slowly rises. Sometimes the entire sundeck has to be dismantled to fit under the low bridges. 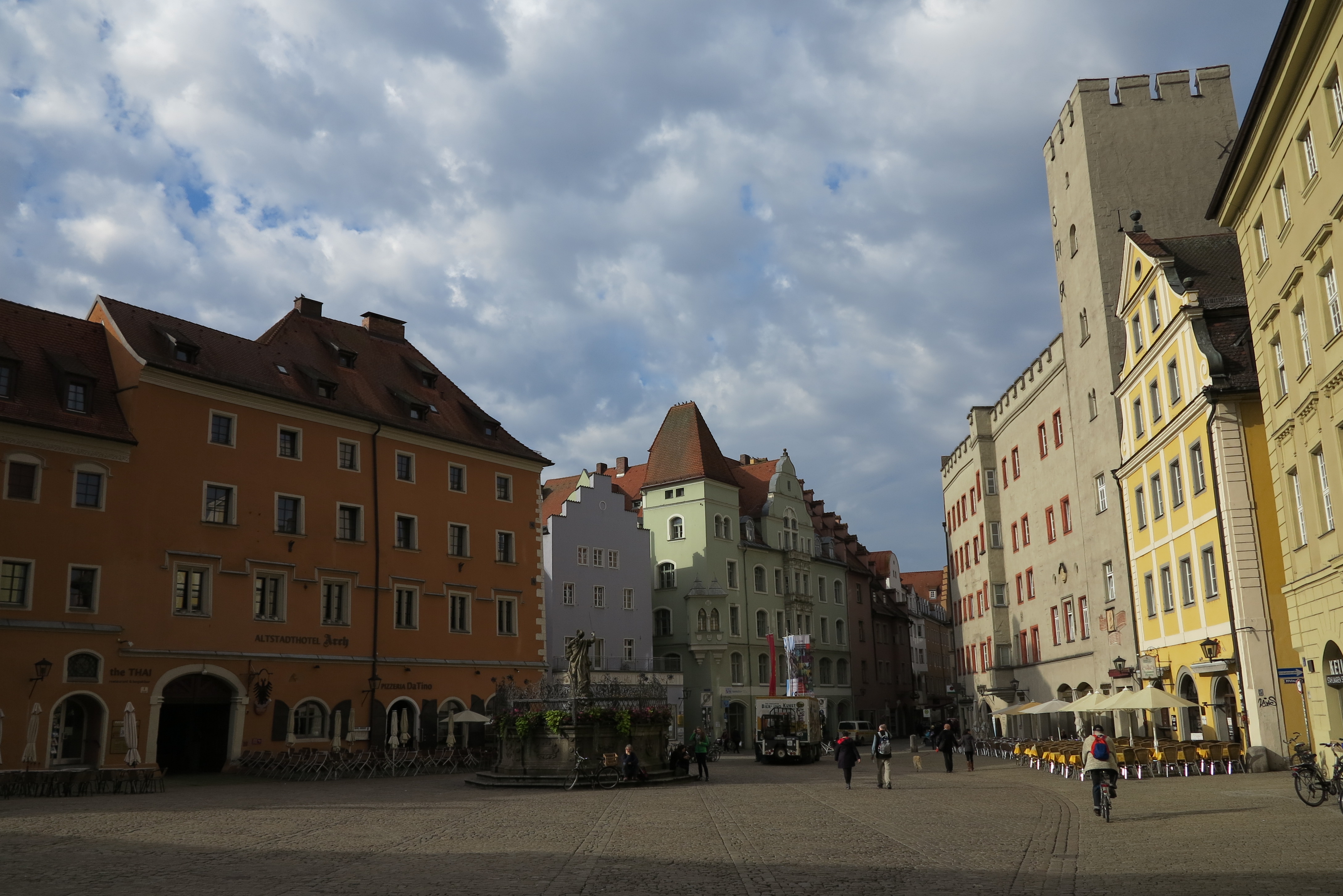 Spared: Regensburg retains much of its old charm because the allies didn’t bomb the city centre

Cruising through the night brought us to Regensburg, a well-preserved medieval city, whose centre is a Unesco world heritage site. In fact, its history dates back nearly 2,000 years. The 13th-century cathedral was finished in 1525 and the stone bridge, built between 1135 and 1146, was the only solid crossing along the Danube for more than 800 years. Nearby, the Alte Wurstküch, or Old Sausage Kitchen, has served finger-sized sausages from the same spot since the 12th century. 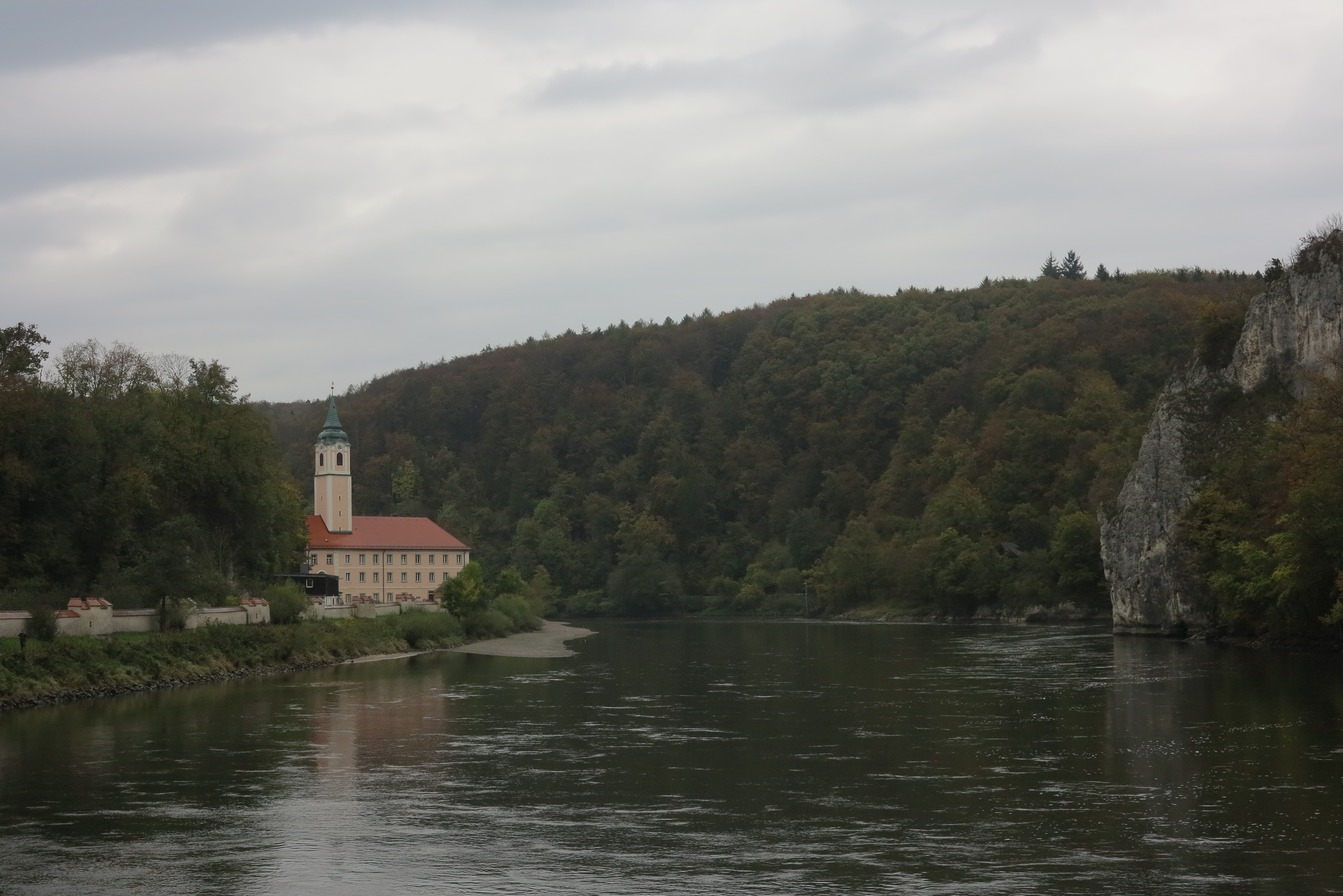 In the afternoon we joined a smaller boat to sail the Danube Narrows to the 7th-century Weltenburg Abbey, which over the years has survived flooding, fire and war. The church is a baroque masterpiece with a ceiling painted to look like a dome and an altar showing St George fighting the dragon. It’s enough to make you thirsty for the beer which has been made here since 1050. 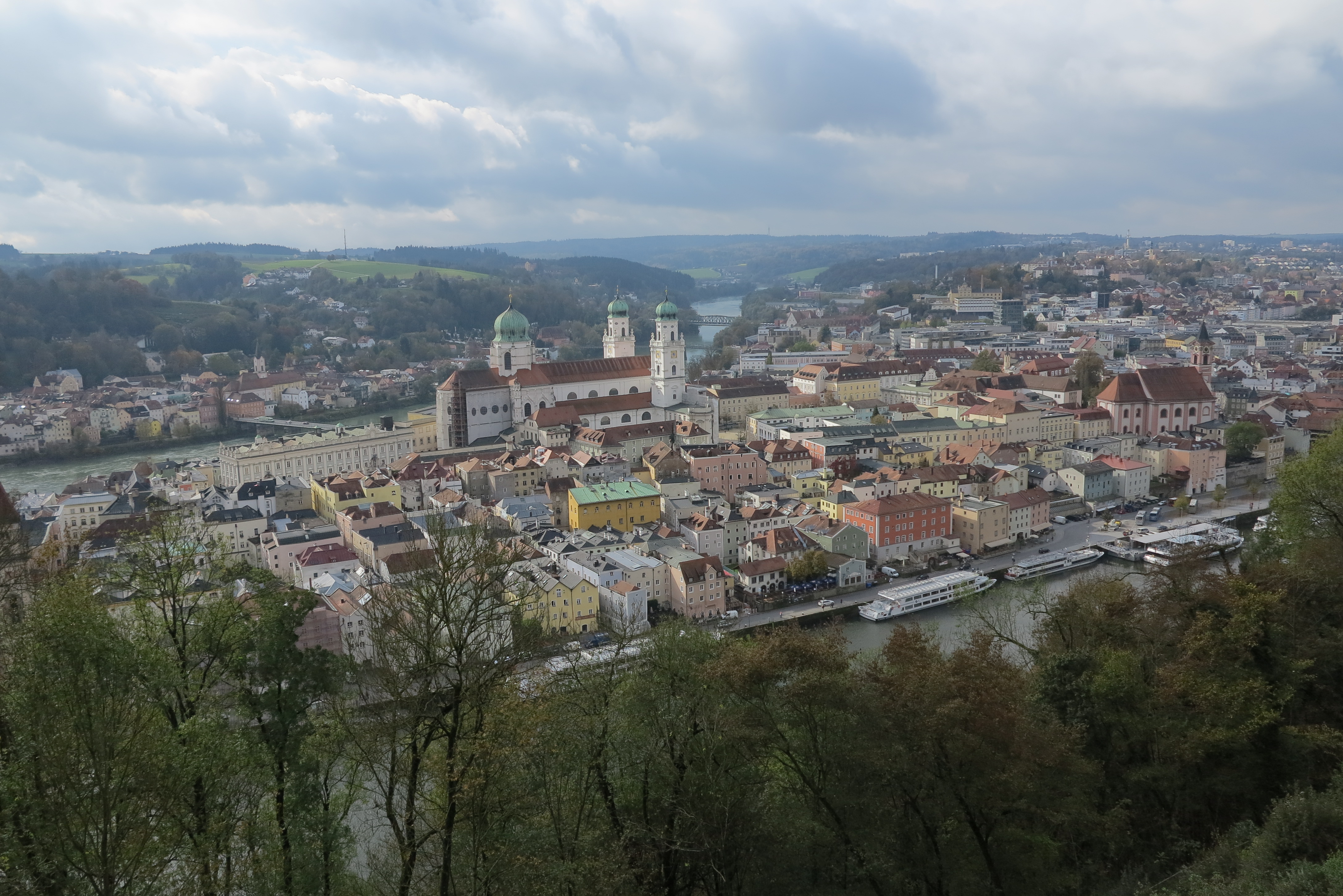 We docked in Passau the following morning and strolled through the sights of the elegant town, once a major salt-trading centre, to St Stephen’s Cathedral to enjoy Europe’s largest church organ with 17,774 pipes and 233 stops. Nearby is a bus to take you to the Oberhaus for a stunning vista of the three rivers – Danube, Inn and Ilz. 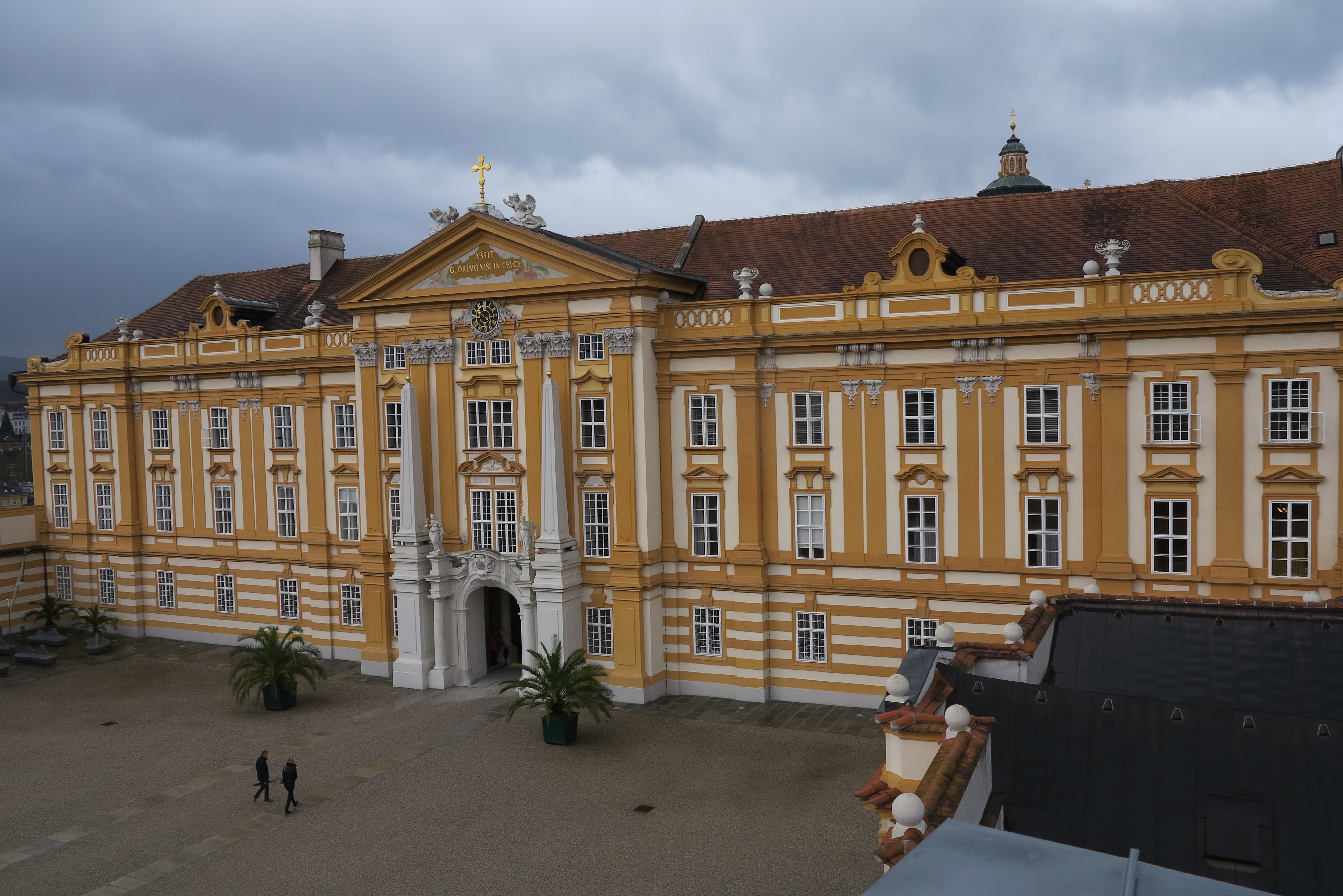 Melk of human kindness: The abbey is still a working monastery

Day 5 took us to Melk and a tour of the 900-year-old abbey, which has 85,000 volumes in its library and an imposing church. Monks still pray and work here and the abbey school has 800 pupils.

Then it was all hands on sun deck as the Hlin sailed through the Wachau Valley, heart of Austria’s wine country, with commentary on the ruined castles and medieval towns lining the banks, before we arrived in the capital Vienna at night for a concert featuring Mozart and Strauss. 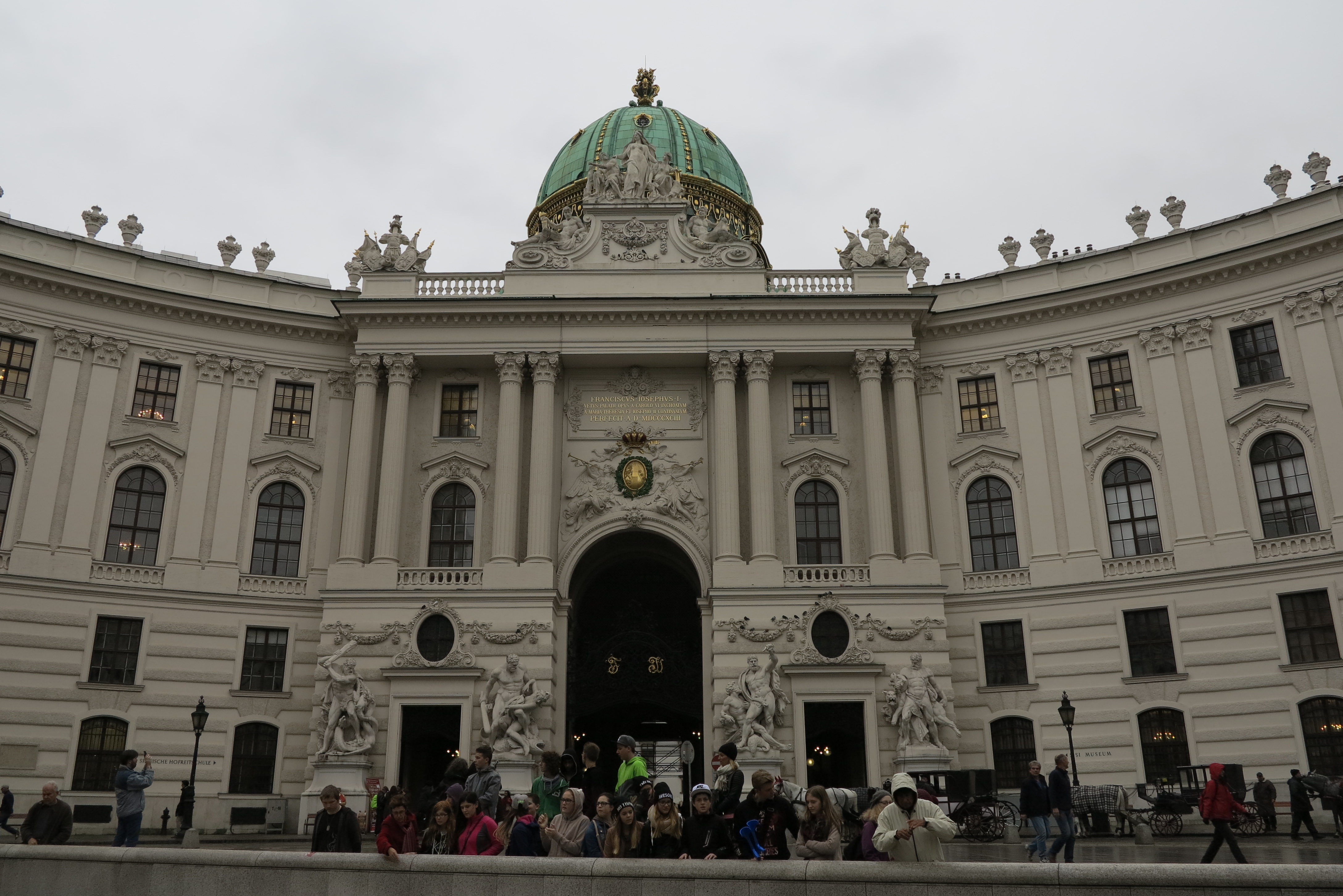 Jewel in the Ring: The Hofburg Palace in Vienna

The next morning, we took a coach to see some of the city’s imposing architecture around the Ringstraße. After its music and art, the city is probably most associated with the Spanish riding school, the Ferris wheel that featured in The Third Man, and the Sacher hotel which gave the world Sachertorte chocolate cake. We settled for another Austrian delicacy – apfelstrudel with vanilla sauce (custard to you and me) at a traditional cafe. 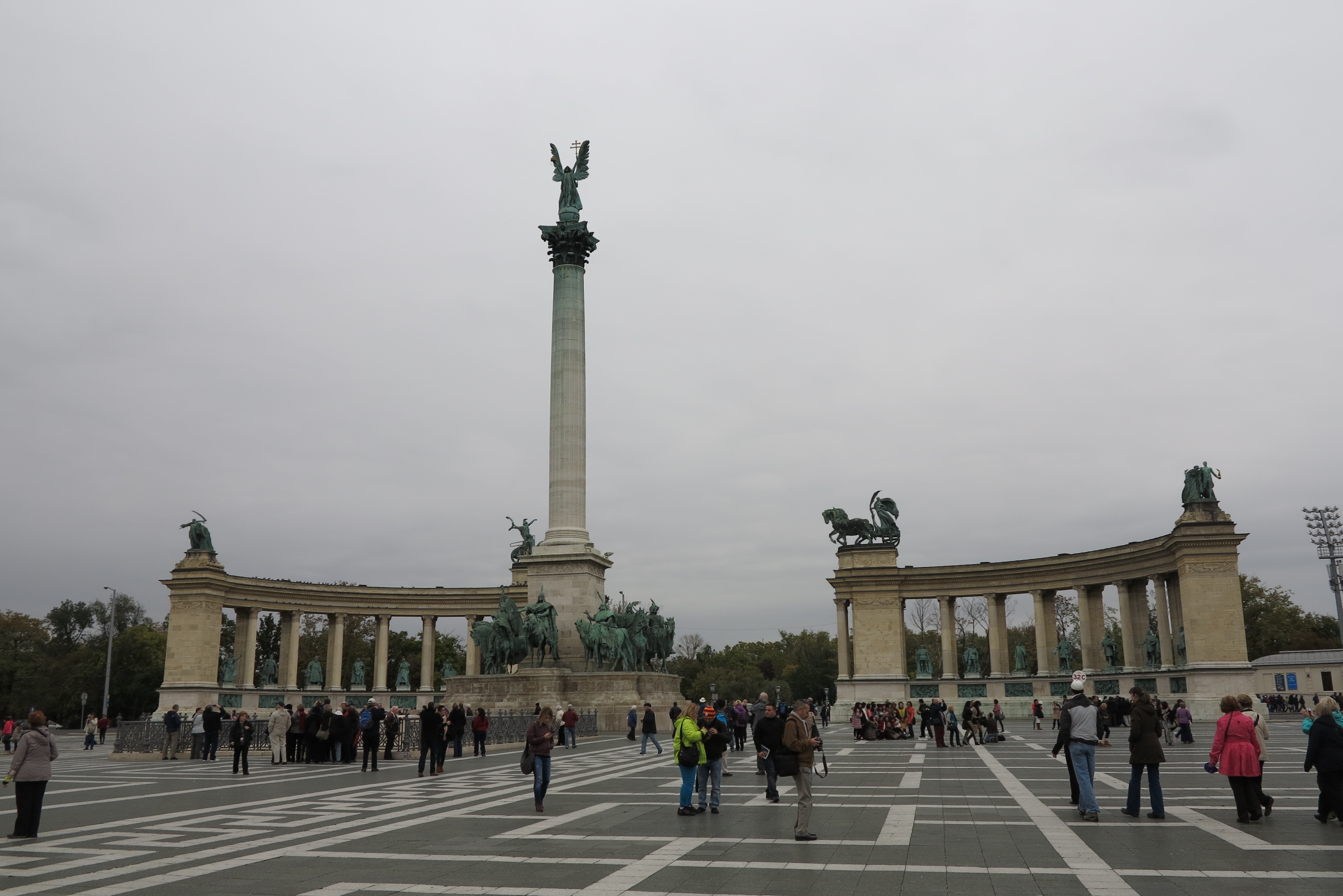 Following the captain’s farewell dinner, where everyone cheered and applauded the dedicated crew, it was time to arrive at our final destination, Budapest. The Hungarian capital, which rose up against Soviet occupation, has many landmarks including the terror house – run at different times by both the Nazis and the Communists – and Heroes’ Square.

Beside the river is a chilling memorial consisting of 60 pairs of metal shoes honouring Jews who were shot in the back by the Nazis and fell into the water.

Vote winner: The Parliament building lit up in Budapest

Elsewhere in the city – which has only existed since 1873 – are 30 mineral water thermal spa baths fed by 123 springs. But it is most beautiful at night, when strings of lights glow along its seven bridges. On an unexpected tour of the harbour on the Hlin, we were enchanted by the beauty of the Parliament building with its 691 rooms and 88 statues.

The following morning it was time to leave our floating hotel and head home via Budapest airport.

River cruising suits many people put off by the idea of big ocean ships. There’s no chance of seasickness, everything’s more relaxed, informal and – dare I say – cultured. There are no children – in fact, barely anyone under 50. 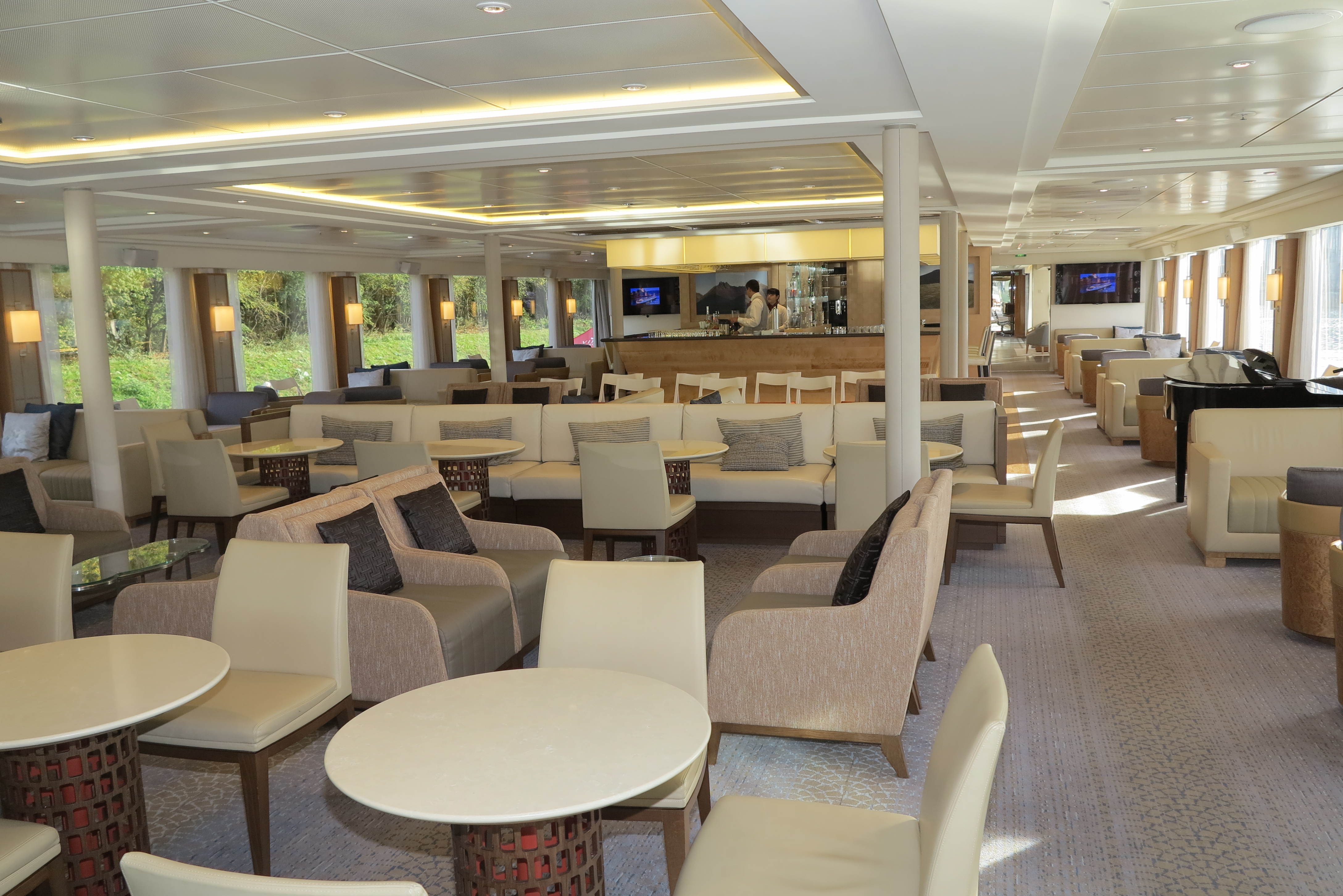 Relaxing: The bar and lounge on Viking Hlin

You miss out on the choice, facilities, amenities and range of a liner. But the experience is much more authentic and immersive. You feel less like a tourist, more like a visitor.

And Viking looks after you all the way. Before you go you receive a pack with personal itineraries, luggage labels and a guide book to the river. You’re met at your arrival airport and escorted to your departure one.

On board, the staff can’t seem to do enough for you, from the diligent cleaners to the energetic programme director – who gives a nightly briefing on the following day’s activities – and from the smiling waiters and bar staff to the knowledgable and helpful concierge, who is happy to guide you through subway systems or advise you on bus timetables. As a 21st-century bonus, there’s even free wifi. 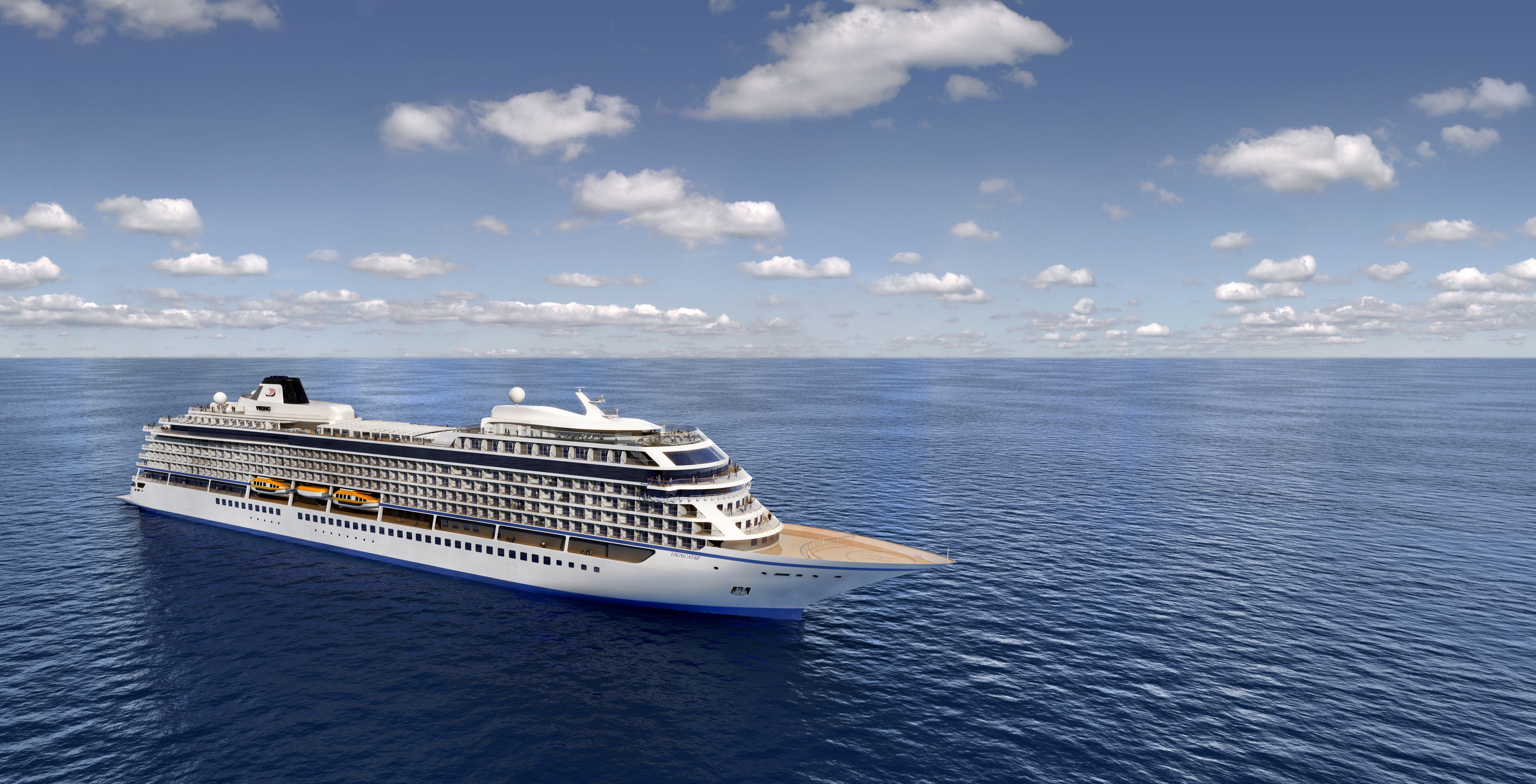 Next year the company launches Viking Star, the first of its ocean-going ships, and promises to maintain the same level of attention to detail and personal service. I’ve already booked a voyage and, if you like the small ship experience, I suggest you consider doing so too.

All photos (except of Viking Star) by author

Shipmonk has been shortlisted as best blogger in the 2016 Cruise International awards – to vote, please click here (final category)

A Viking cruise down the Rhine

Days of Rhine and poses

One thought on “A voyage through history: A Viking river cruise down the Danube”