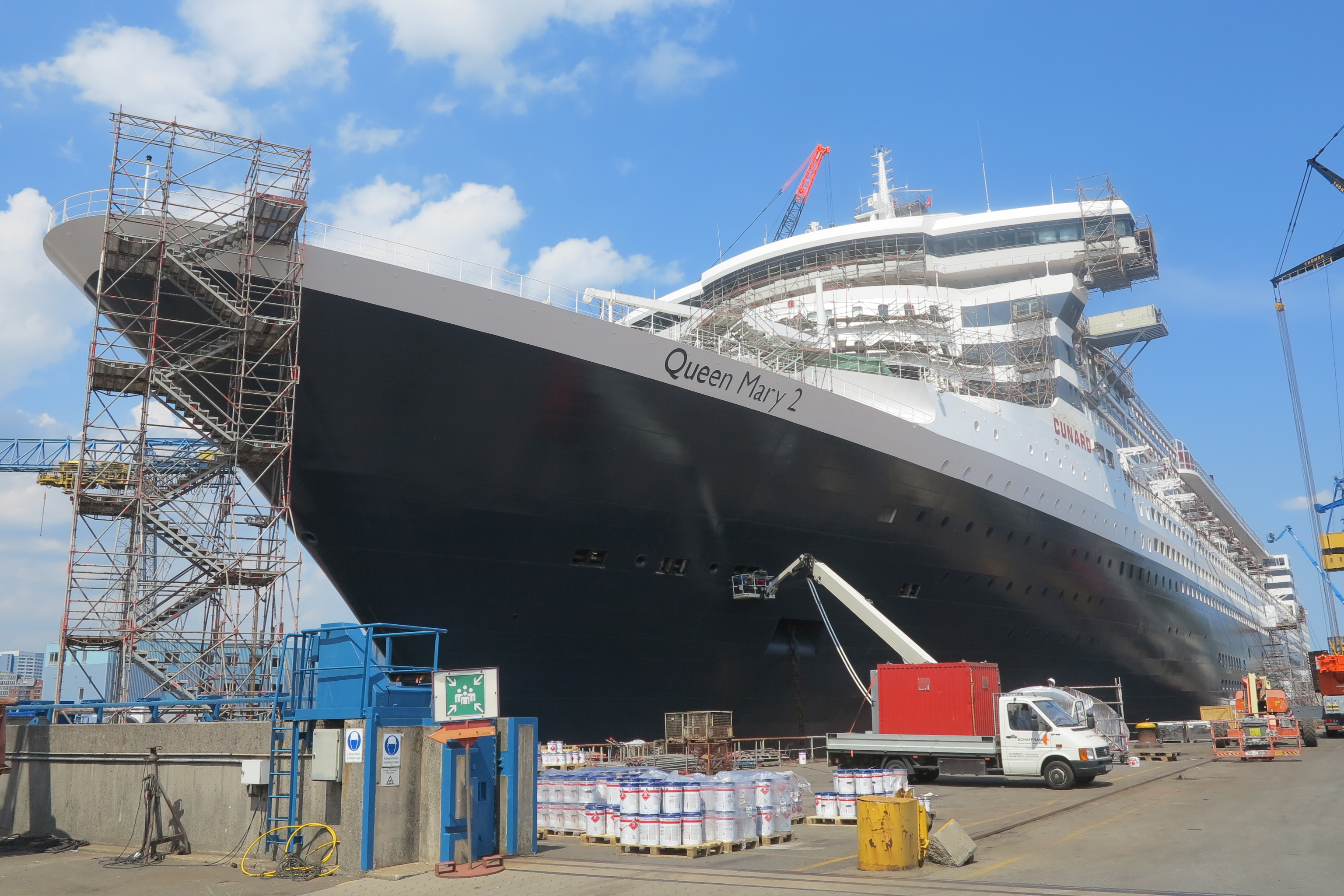 Black as hull: The QM2 is getting a new coat of paint

That’s why a team of 4,000 people, including 1,200 crew, are working shifts round the clock in Hamburg to transform Queen Mary 2 with new and refurbished restaurants, improved cabins, a new coat of paint and enough carpet to cover the Wembley pitch five-and-a-half times.

I visited the Cunard flagship at her dry dock today, 11 days into the 25-day refit. And though the liner is a complete building site, some of the major changes are already taking effect. 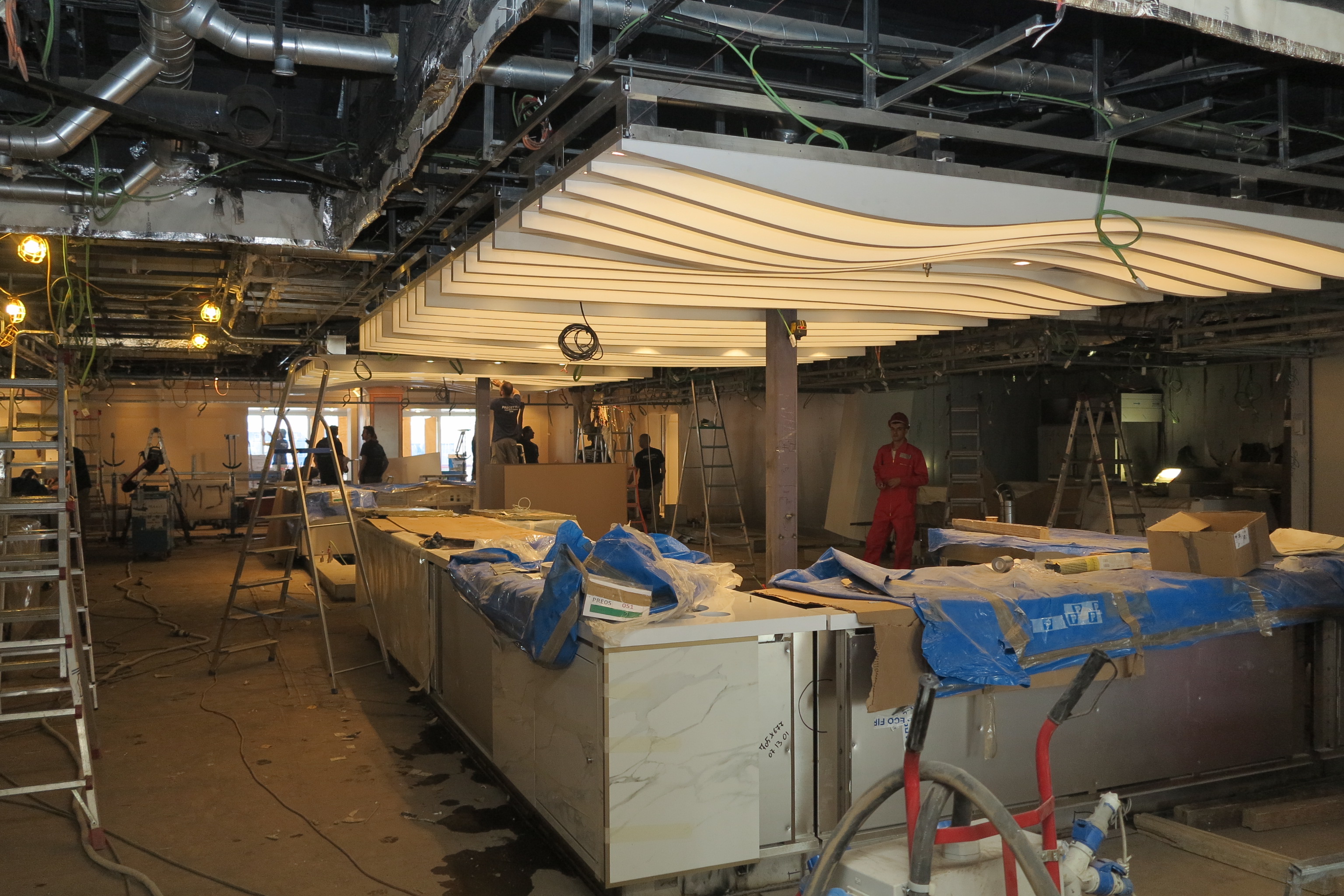 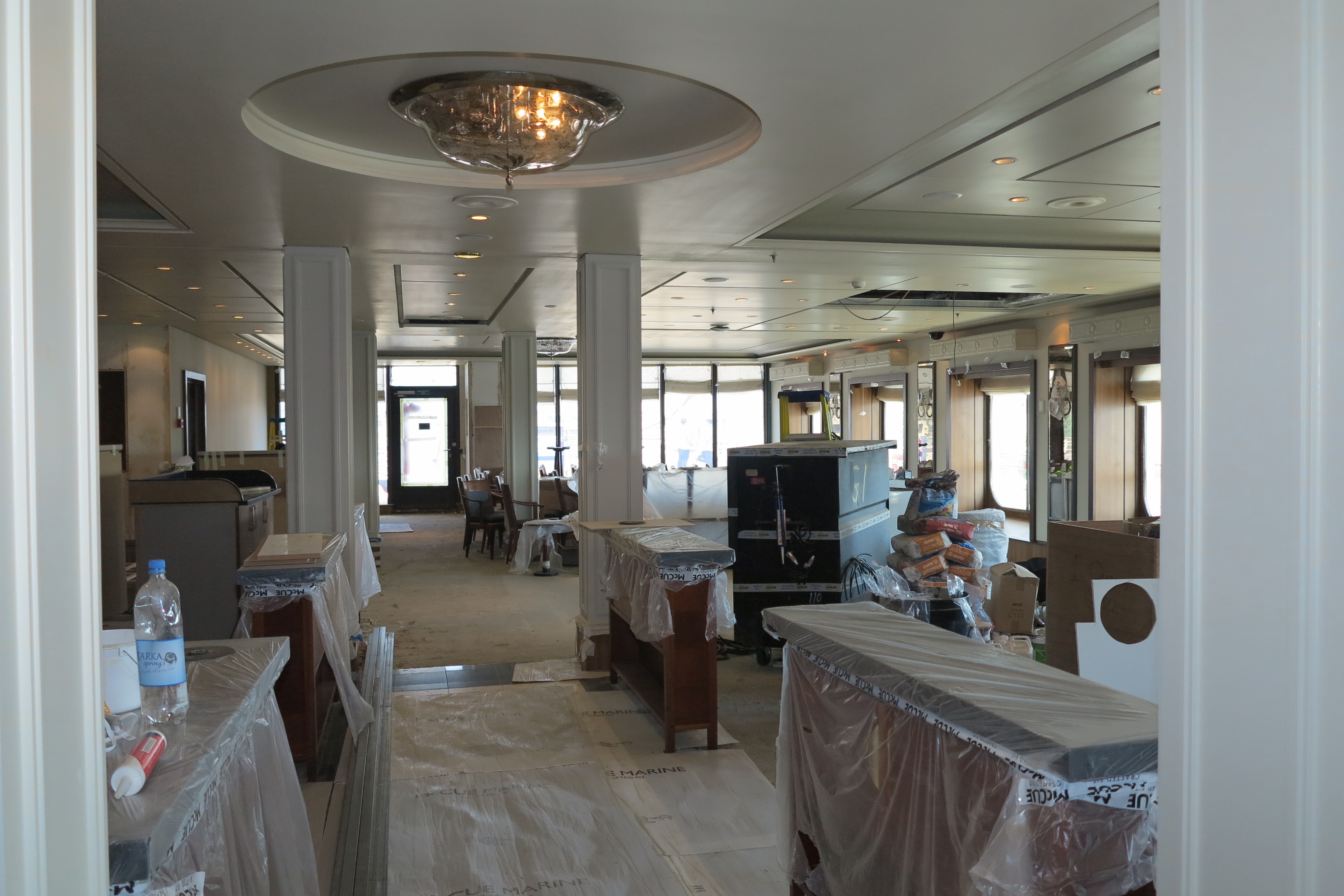 New hue: Princess Grill will have a blue theme 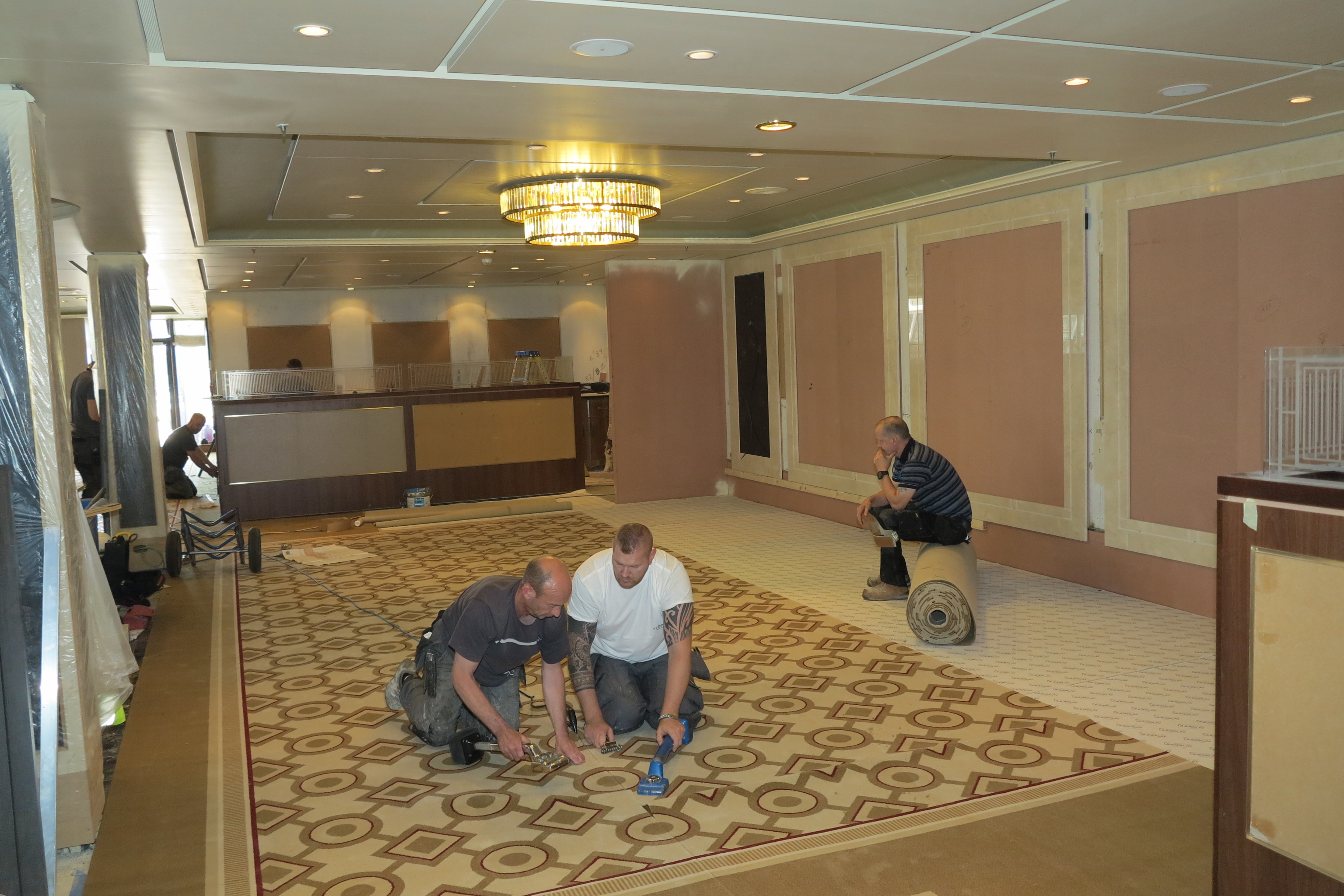 ‘Reddy’ for a fresh look: The Queens Grill will have a red theme 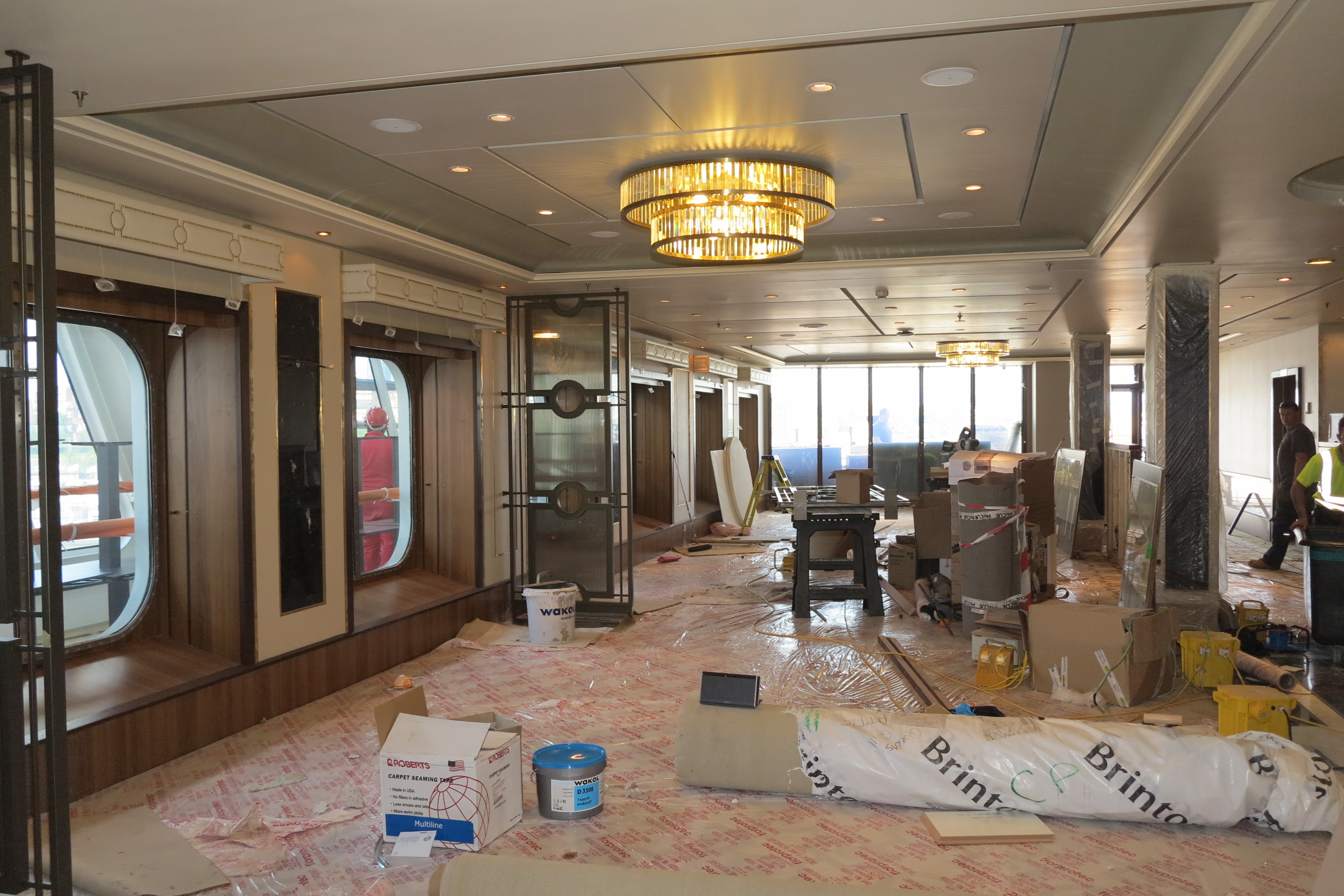 Regal: Another view of the Queens Grill

The glass lifts are being removed, creating more space in the atrium and upstairs in the Kings Court buffet. Both the Queens and Princess Grills are being given a whole new look with a colour scheme to match – blue for Princess, red for Queens.

Cabins are being given sleek new furniture with larger TVs and wall-mounted photographs shot from classic Cunard buildings in Liverpool, Southampton and New York. 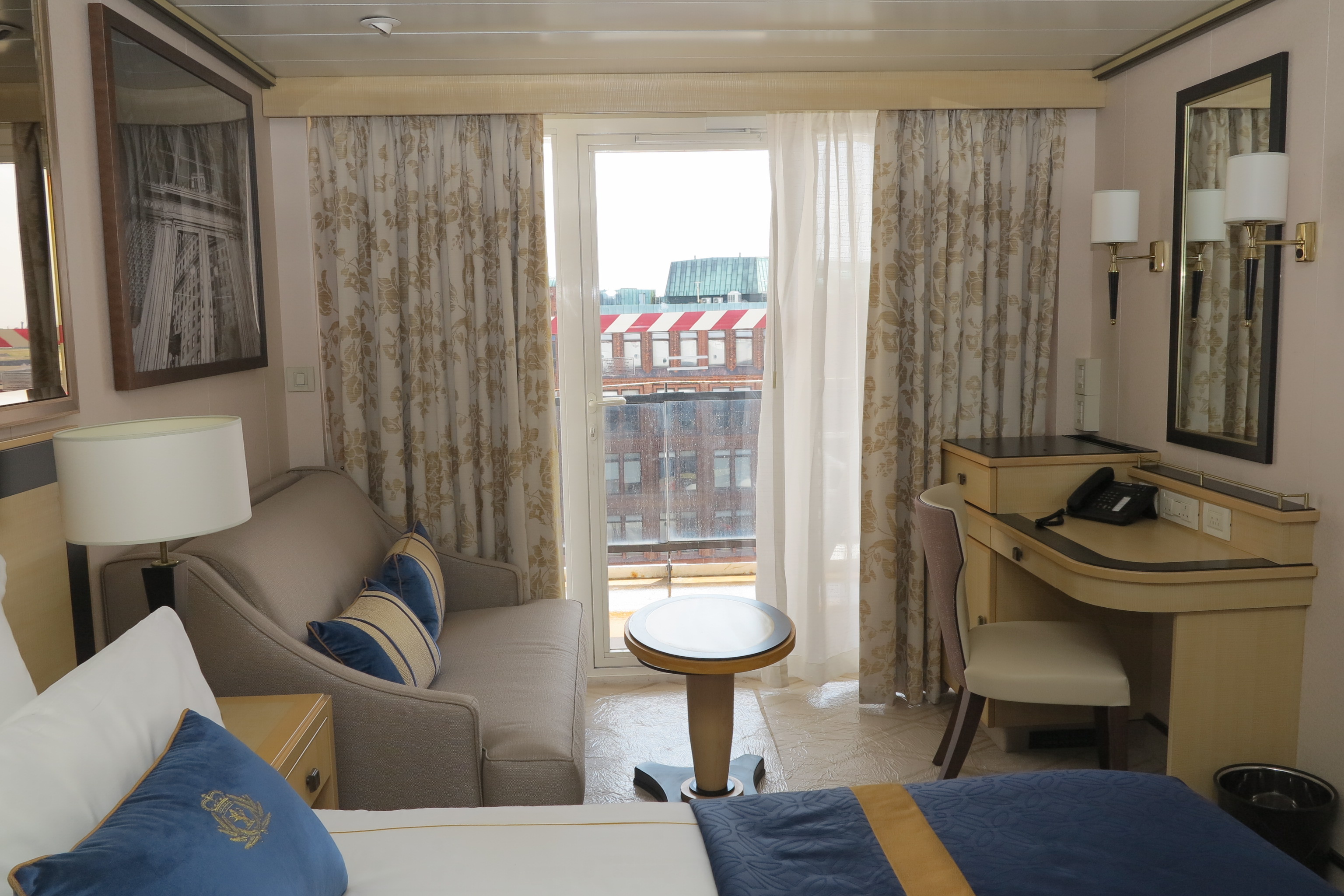 Areas like the spa and the Golden Lion pub are having major work, floors have been ripped up and the deck is getting new wood. 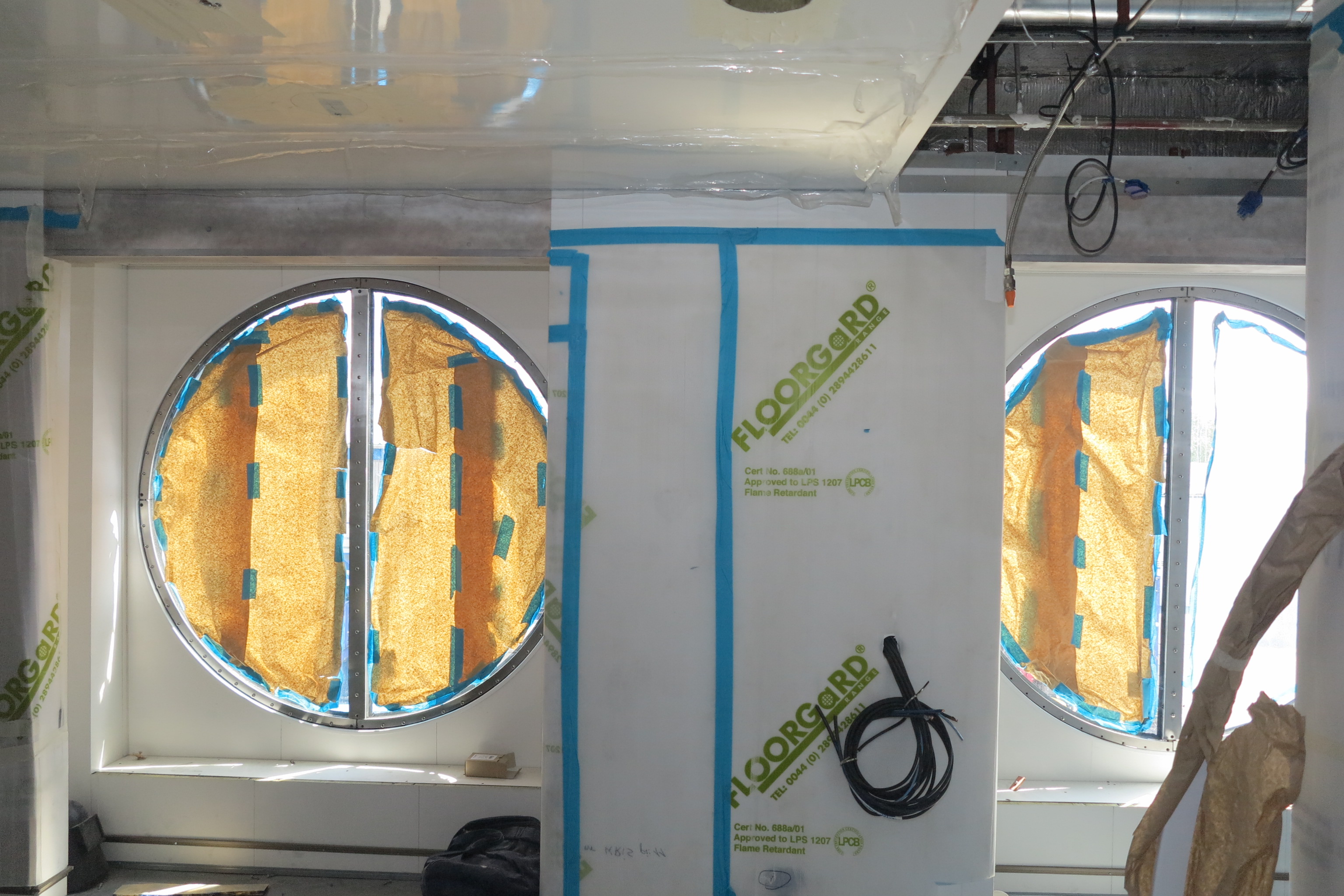 A whole new set of 35 staterooms are being put in, along with 15 single cabins. And every existing stateroom will be refreshed this year – from deck 6 upwards during the refit with the rest being done during the few hours’ turnaround on days when QM2 docks in Southampton. 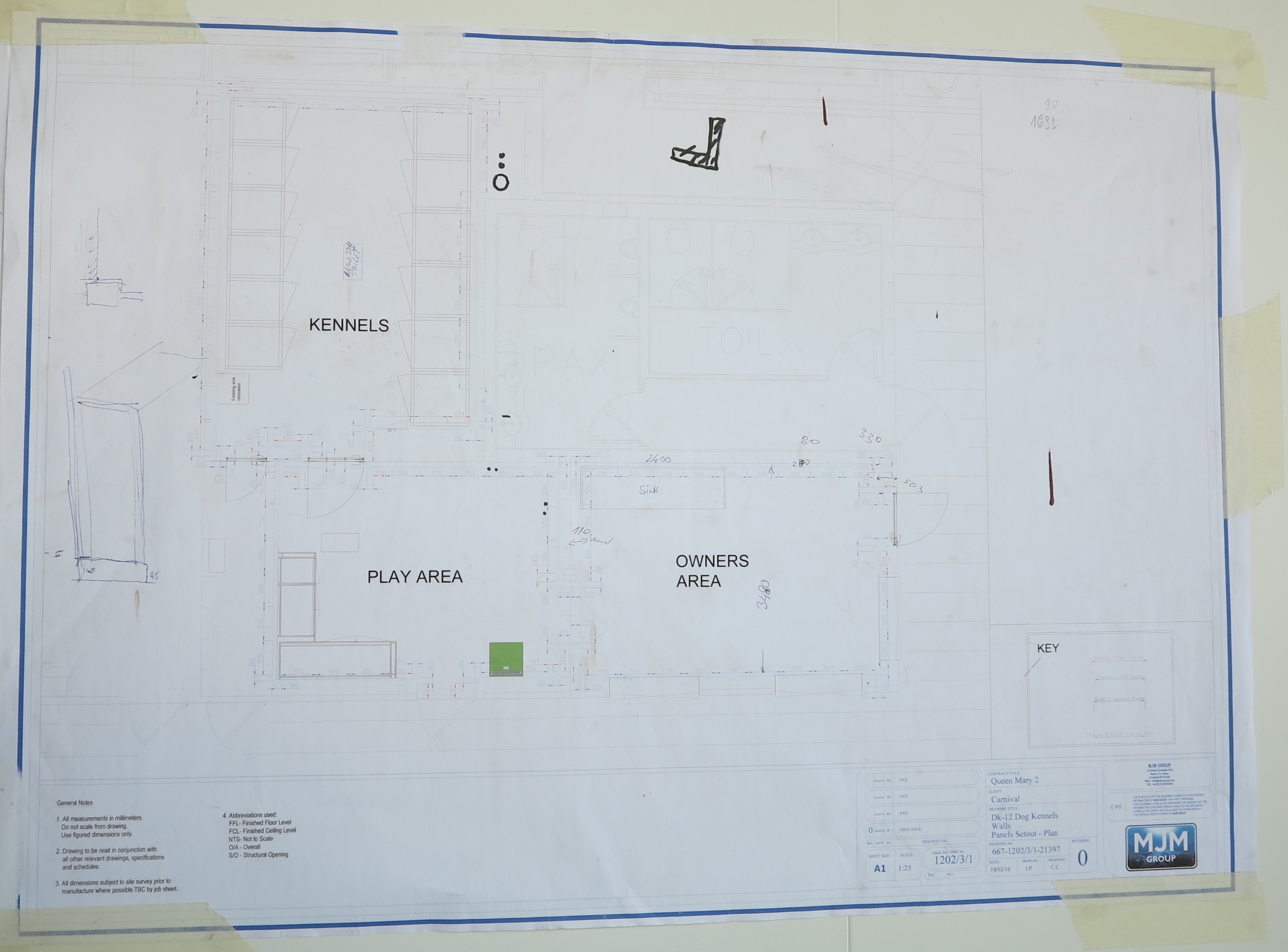 Rover the ocean: The design for an expanded kennels area

Even four-legged travellers aren’t being overlooked, with double the number of kennels to 22 and a welcoming area for owners.

A fire hydrant from New York has arrived – that and a lamp post from Liverpool will be installed ‘for the dogs’ convenience’. 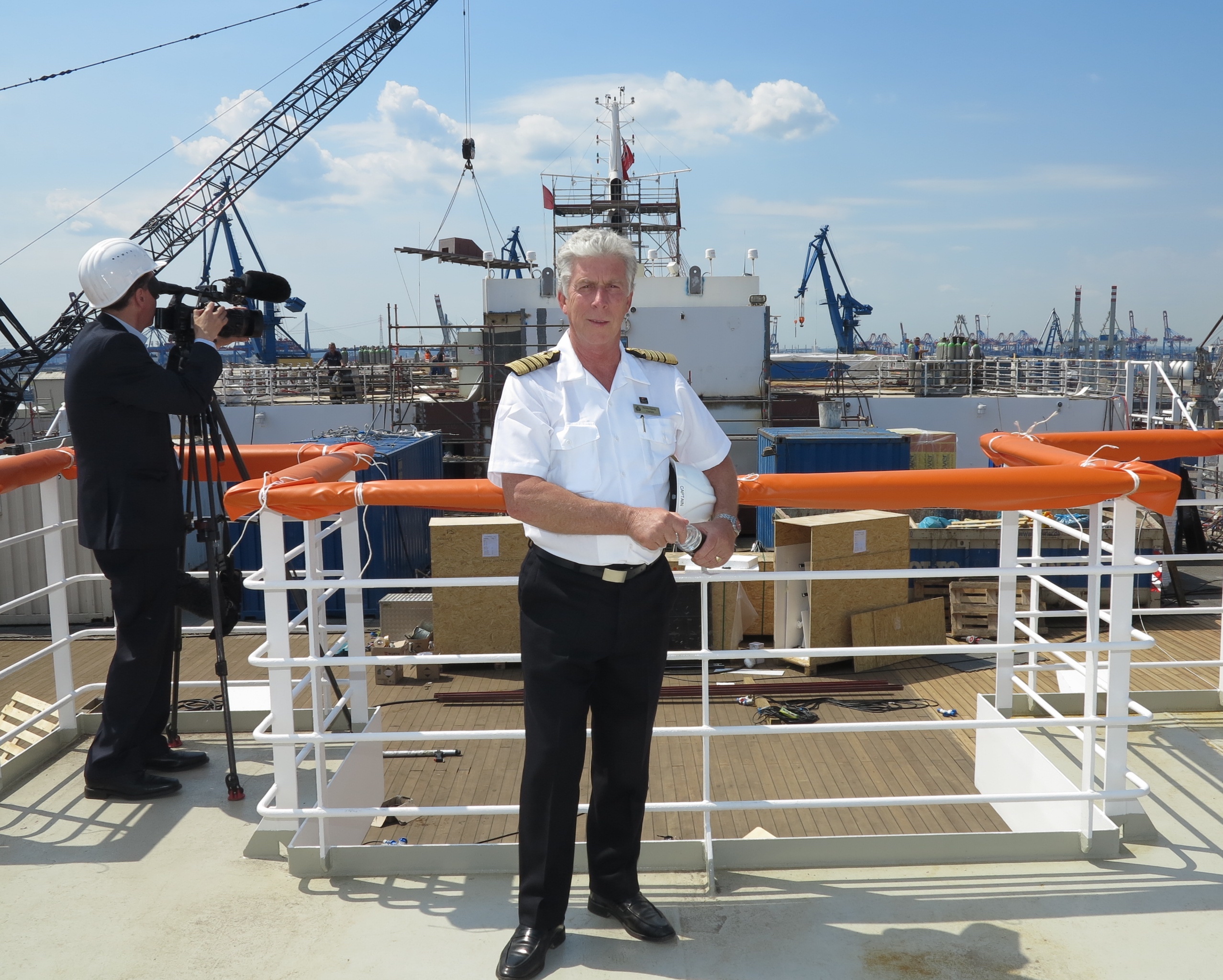 In charge: Captain Kevin Oprey in front of new staterooms on deck 13

Overseeing the work is QM2 Captain Kevin Oprey, who has served five of the 12 years the ship has been in service. He said the refit is an ‘amazing transformation’ and told me he is particularly looking forward to seeing the changes on deck 7 where the Carinthia Lounge is replacing the Winter Garden. 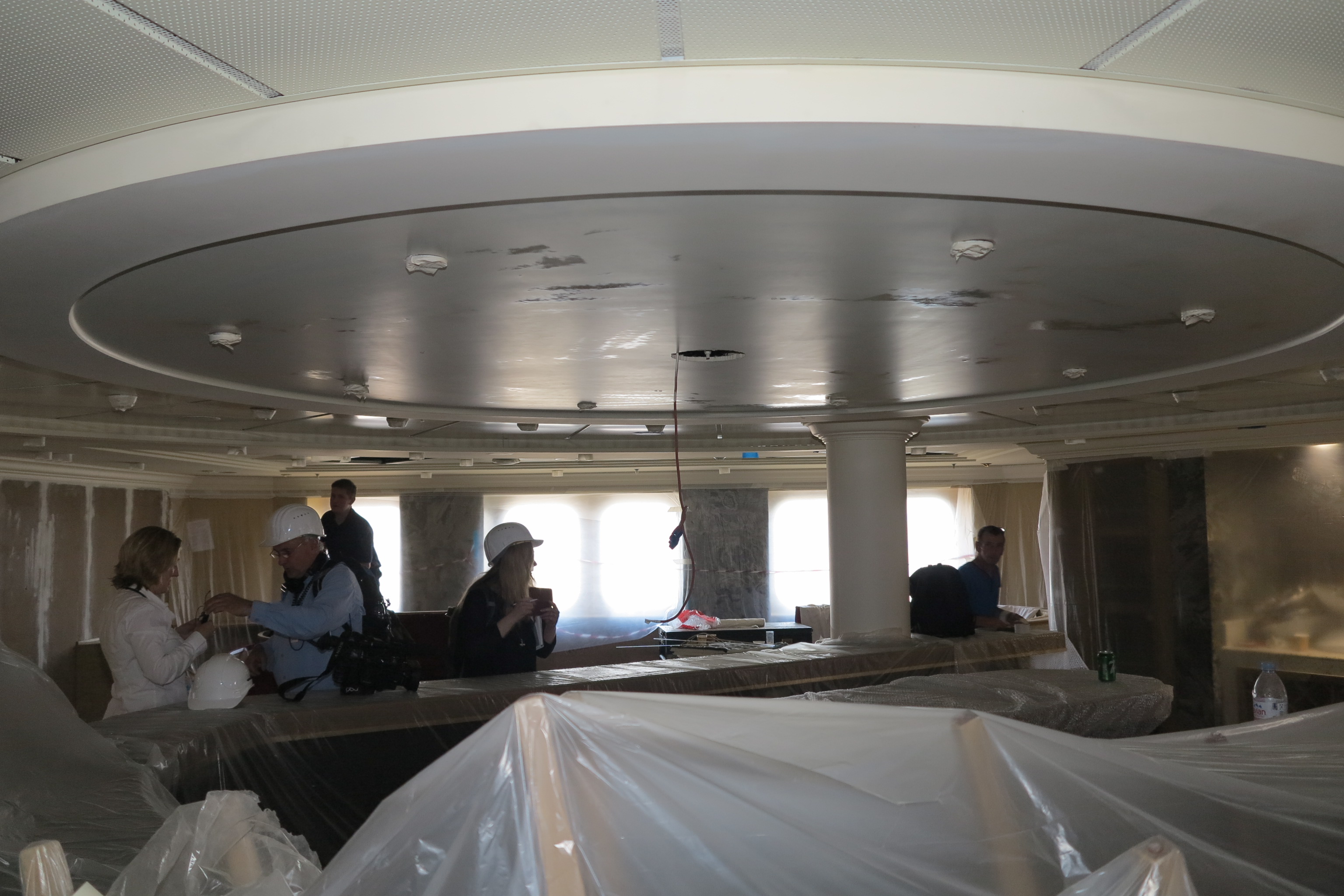 Old English: Todd English is being replaced by The Verandah

Elsewhere, the Todd English restaurant is turning into The Verandah, modelled on the Grill on the original Queen Mary, and there will be a new steakhouse.

Sir Samuel’s is teaming up with the Godiva brand of Belgian chocolates to appeal to passengers’ sweet tooth. 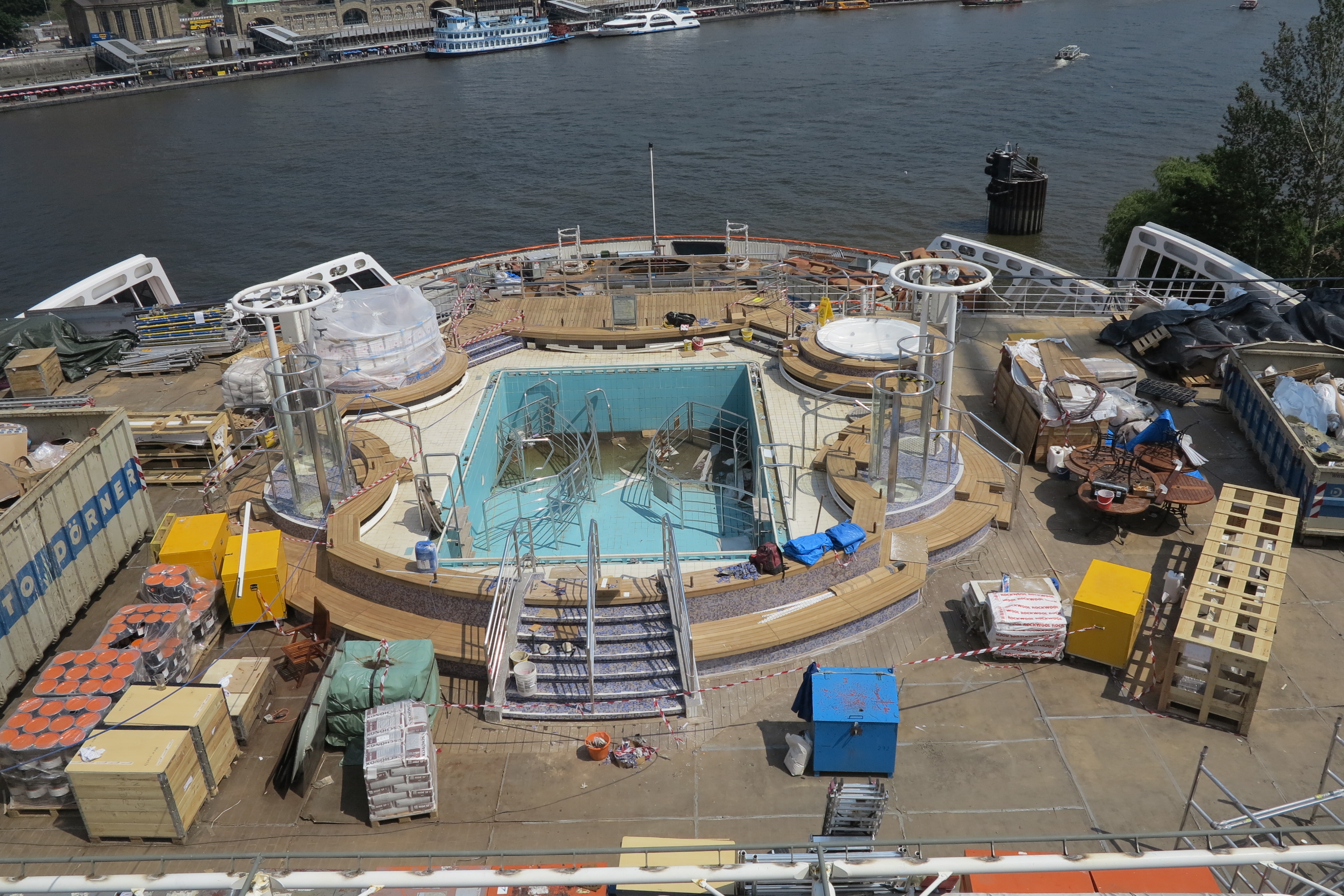 Stern face: The rear of the ship

And there’s plenty going on in the engine room and under the ship too.

But while the builders – and the team supplying them with 17,000 meals a day – work hard away, someone else is facing an unrelenting deadline. 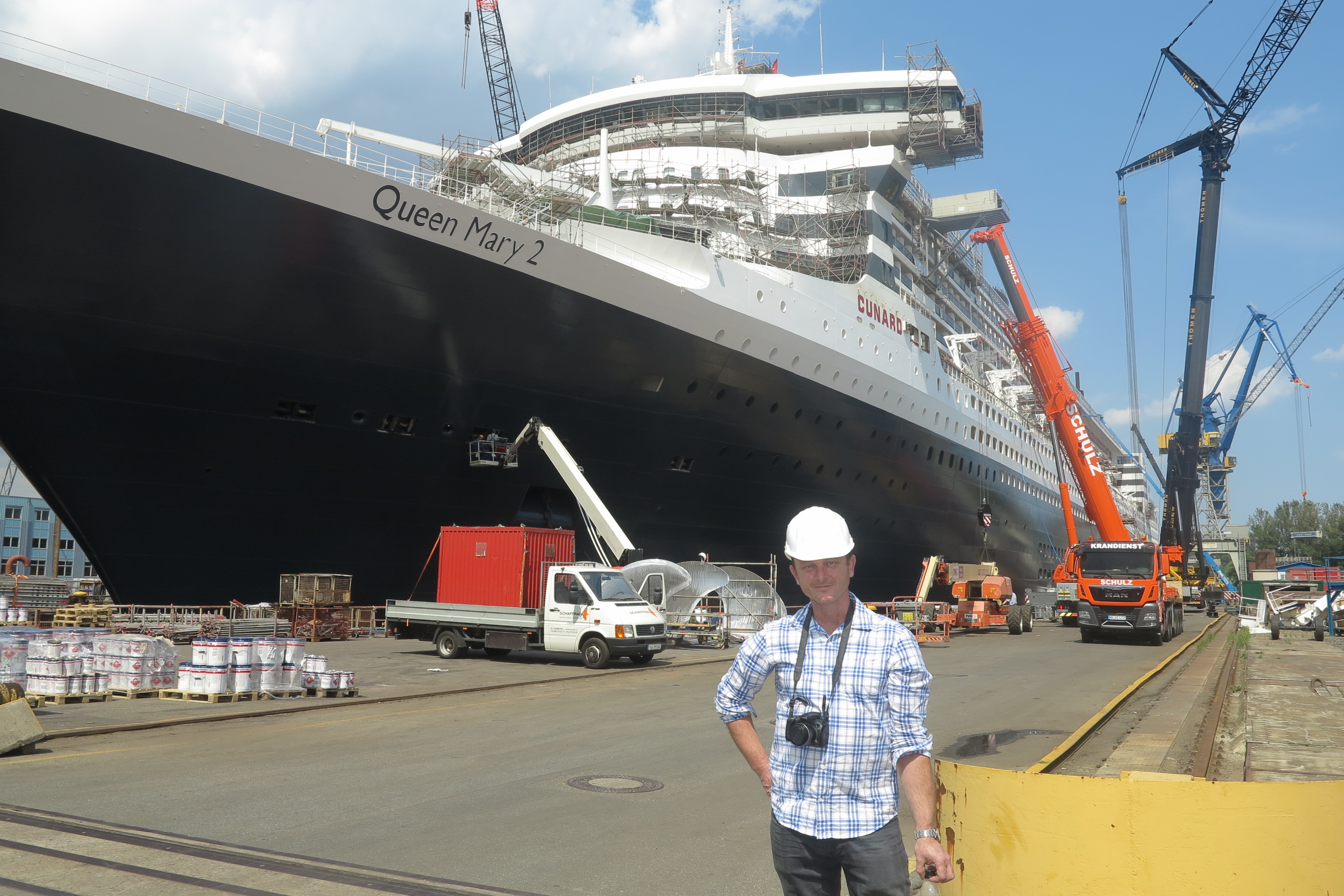 Marine artist Robert Lloyd, who has produced many paintings of QM2 over the years, has to create a new one, based on his visit today, to be unveiled when the remastered ship arrives in Southampton on June 23 ahead of a transatlantic crossing to New York.

He’s going to set the new 5ft by 4ft artwork at the Blohm and Voss shipyard as evening falls, with the sun’s fading rays lighting the ship while welders still bustle away. Because the painting has to be framed, and photographed to produce prints, that gives him little over a week to turn it around.

But he seemed confident after his tour today. ‘I don’t think my family are going to see much of me for the next few days,’ he smiled.

I end with a ‘poster’-style shot I took of the ship in dry dock using a panoramic effect.