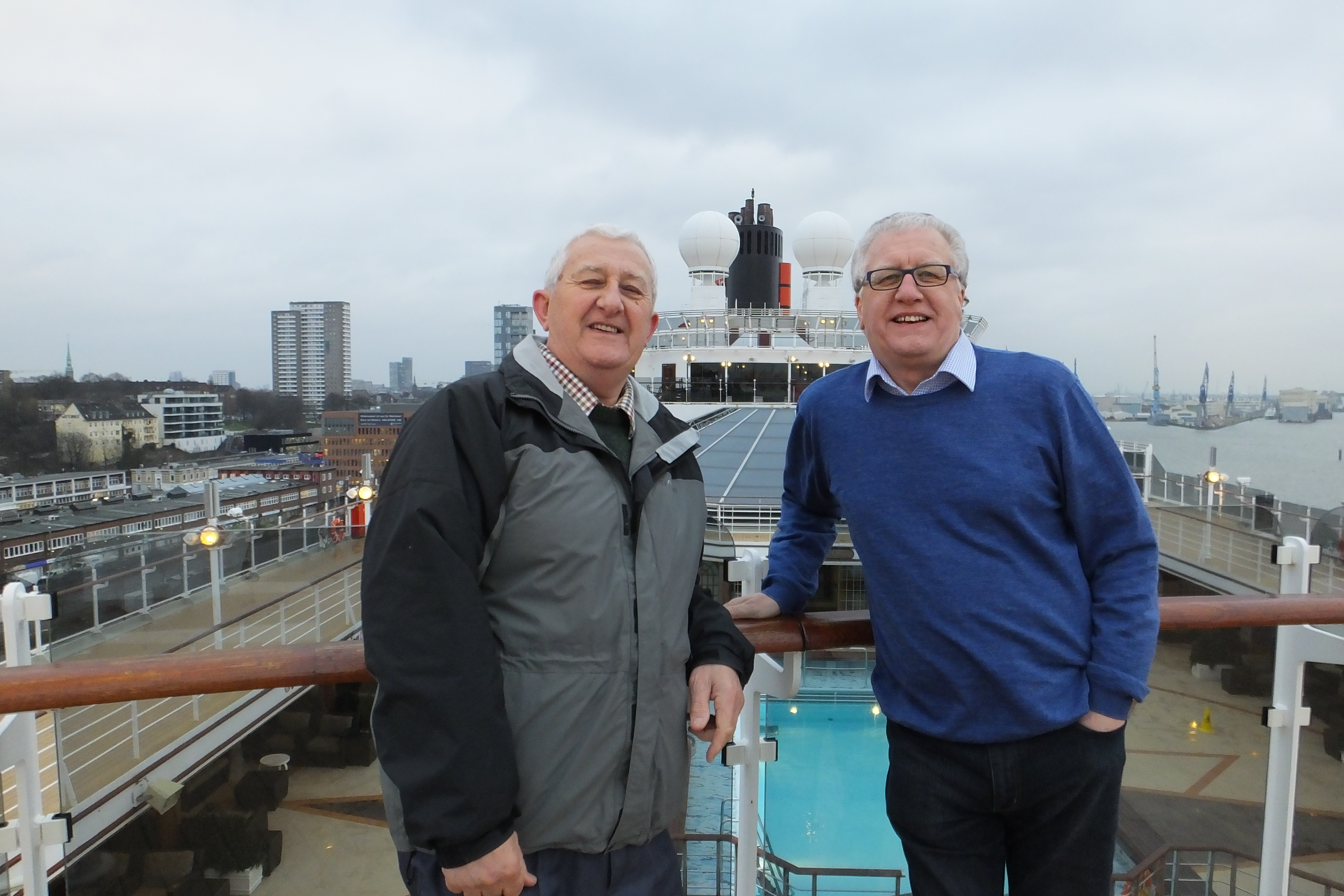 Brothers on board: Roy (left) and Kie Miskelly

Roy Miskelly was a steward in first class on the old Queen Elizabeth. His brother Kie – the editor of the Scottish edition of Metro newspaper – has never been on a cruise. In this guest blog, Roy, 67, and Kie, 65, give their impressions of a voyage together on the new Queen Elizabeth on a round trip from Southampton to Hamburg. 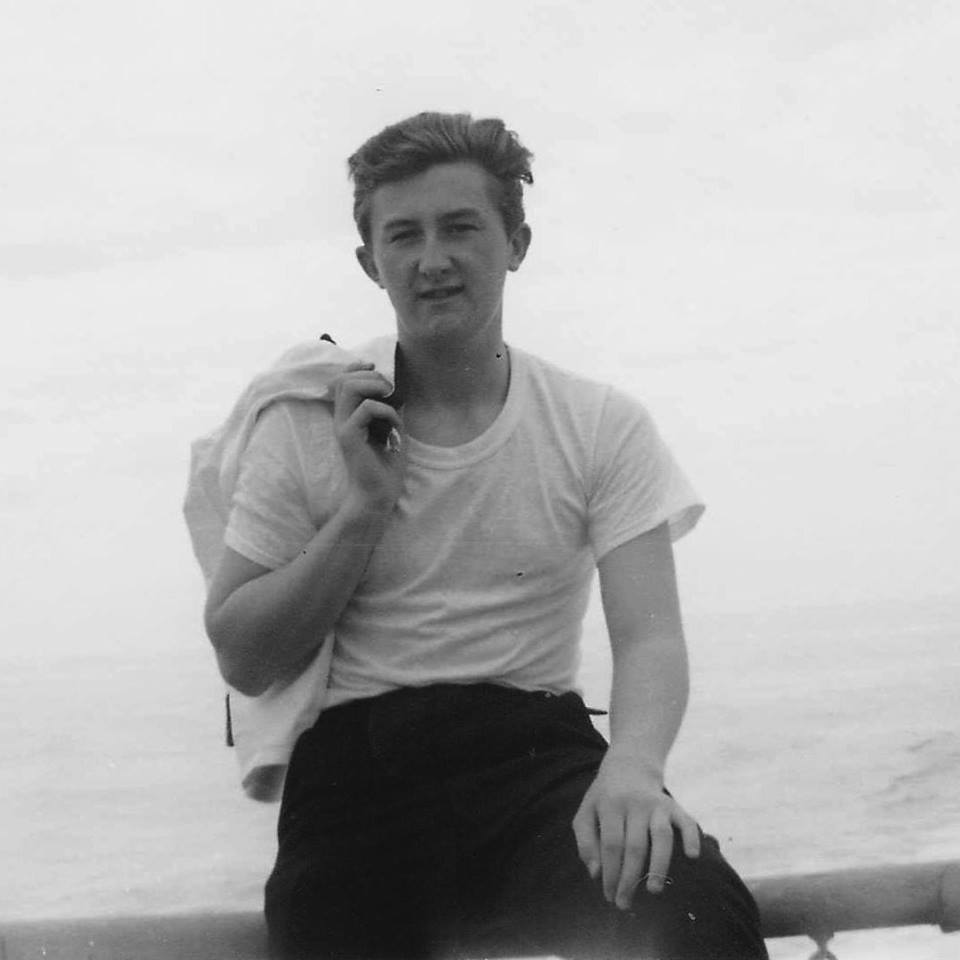 ROY: April 1965 and I boarded the Cunard liner RMS Queen Elizabeth to start a career as a steward, plying between Southampton and New York via Cherbourg.

I was directed down into the depths of the great liner to the crew’s quarters, below the water line, with the constant throbbing of the propellers as we churned our way across the Atlantic Ocean.

Passenger boarding in those days was as simple as possible, luggage left in the Ocean Terminal was delivered to your cabin or stateroom and a steward would accompany you to your cabin and take in your luggage.

What a difference too in my day in the passenger cabins and staterooms, magnificently fitted out with all that you would require for your journey. If you were travelling first class then extravagance was bountiful and lower down the classes, cabins were still very comfortable for the seven-day journey to New York. 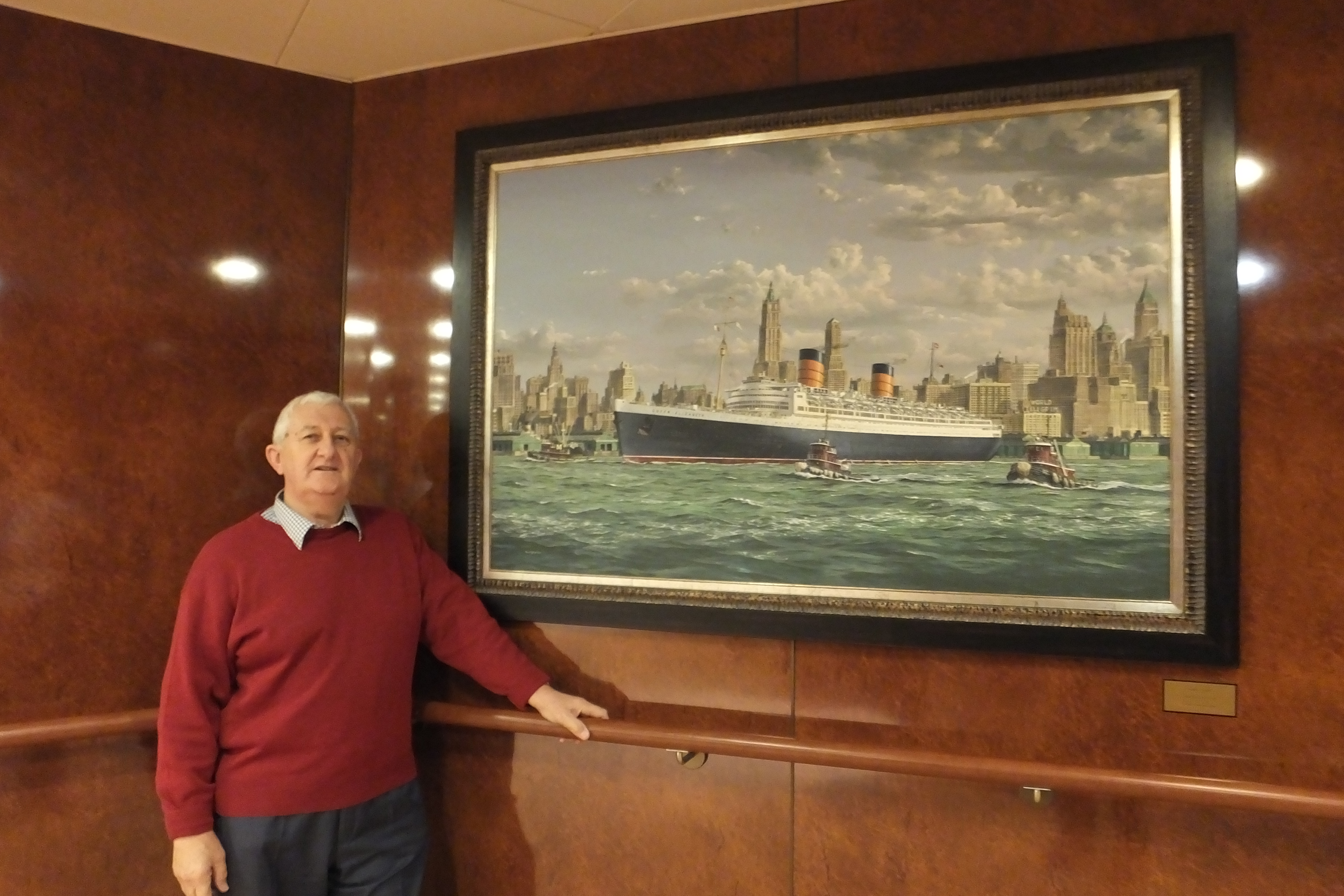 Memories: Roy with a painting of the old Queen Elizabeth

The ship, stylishly fitted out with art deco surprises around every corner, was a magnificent sight for those embarking on their first journey and having worked in all of the restaurants on board the food was first class, as you would expect on one of Cunard’s finest ships.

The tables in first class were laid out perfectly with the entire cutlery ready to use on the many courses available as you sat anticipating what was to come with a vast array of choice – hors d’oeuvres, entrée, soup, main course followed by sweet.

Entertainment was also excellent and provided in many of the lounges and activity rooms with a first-class service provided by stewards working feverishly to make sure you were never kept waiting for whatever delights were available – afternoon tea, cocktails and so on.

There was always someone on hand to provide for your every need as was the tradition with Cunard.

January 2016 and boarding the newest Queen Elizabeth liner, this time as a passenger, I was not surprised by the amazing décor of the ship, much of it as it had been on the original Queen Elizabeth. 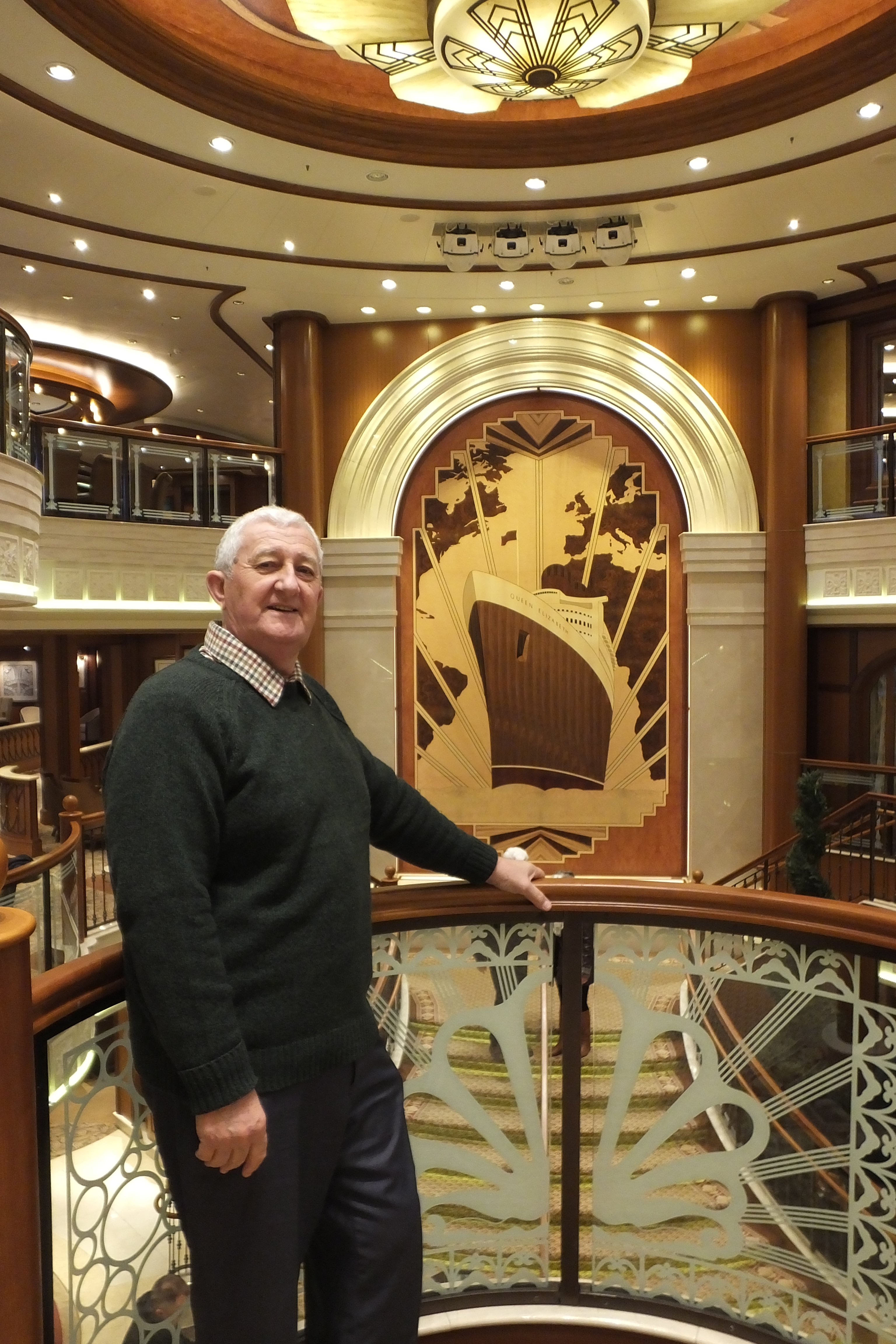 Classic: The atrium of Queen Elizabeth pays homage to its predecessor

And a very similar boarding system, baggage left in the terminal delivered to your cabin, but you had to make your own way to the cabin – one of more than 1,000 spread over five or six decks.

This being a cruise ship catering for more than 2,000 passengers the cabins were not as graceful as those on board the original Queen.

No first-class restaurants for us either* but you were allocated a place in one of the many available and all providing the same excellent service. If you required something more upmarket there was the choice of an a la carte restaurant but with an additional fee.

With so many more passengers to feed and two sittings, tables were not laid out with all the fine cutlery as on board the original Queen but you were provided with the right items depending on what food you ordered.

It was still the best service from the stewards and nothing was too much trouble, you just had to ask.

The entertainment and shopping experience were second to none with shops selling everything you would expect plus a ballroom, theatre, cinema, all with some form of activity going on. 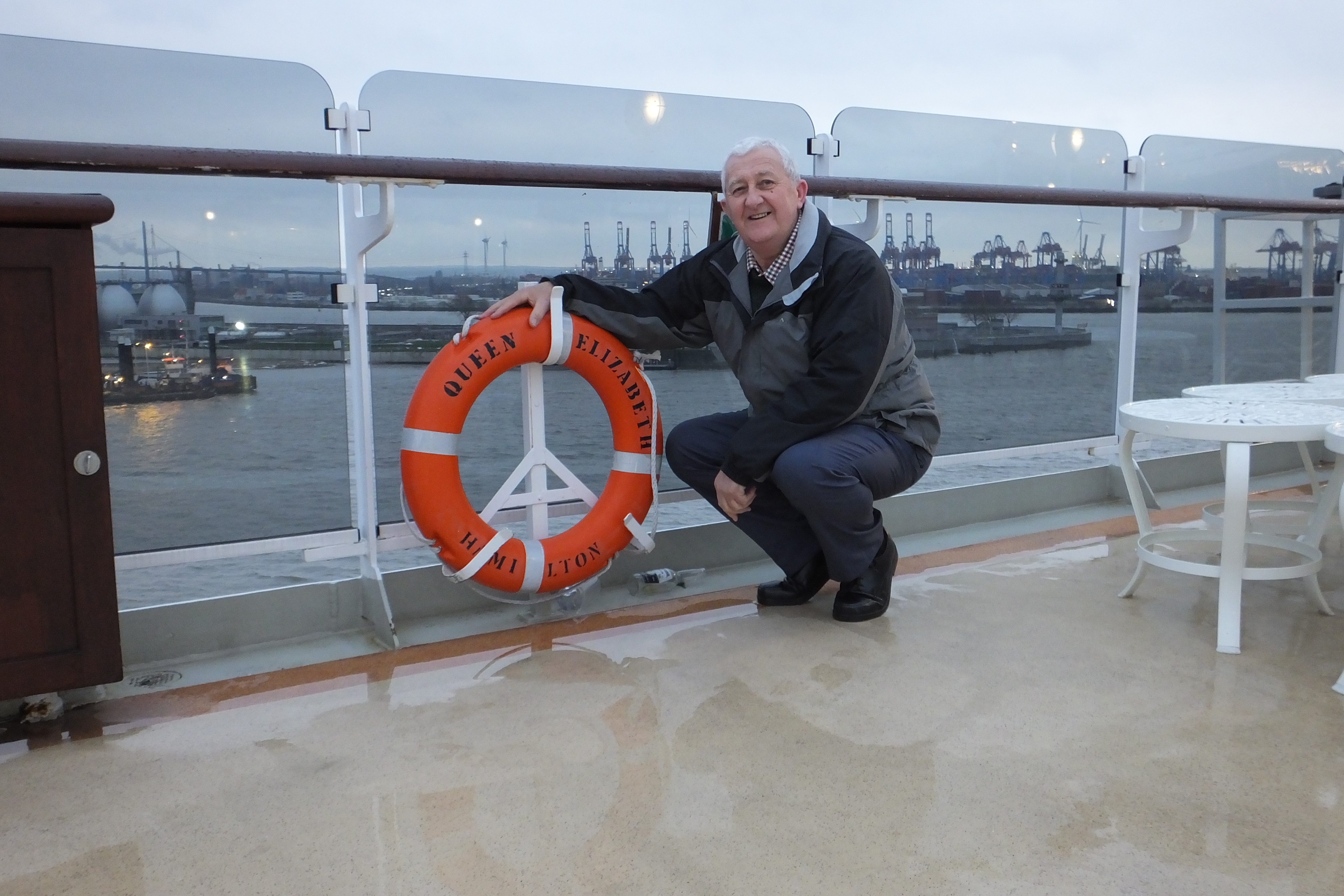 Now a passenger: Roy, a former steward, enjoys being a guest

Swimming pools on the deck and, below, a gym and sauna – all the things you would expect on such a beautiful ship.

There were formal evenings where one had to wear jacket and tie and less formal where just a jacket was required. If you just wanted to eat and relax a buffet restaurant was available and the food there was amazing and available over three eating periods, breakfast, lunch and dinner.

Just want to relax ? Well, there were bars and lounges where drinks were available throughout the trip, again magnificently decorated and very interesting for those with an interest in the history of the Cunard line.

Are today’s standards as high as they were in the 50s and 60s? I think they are although today it would seem they are catering for the masses whereas in my day there was definitely a move toward catering for the individual.

Nevertheless, this was an amazing experience aboard a great liner. 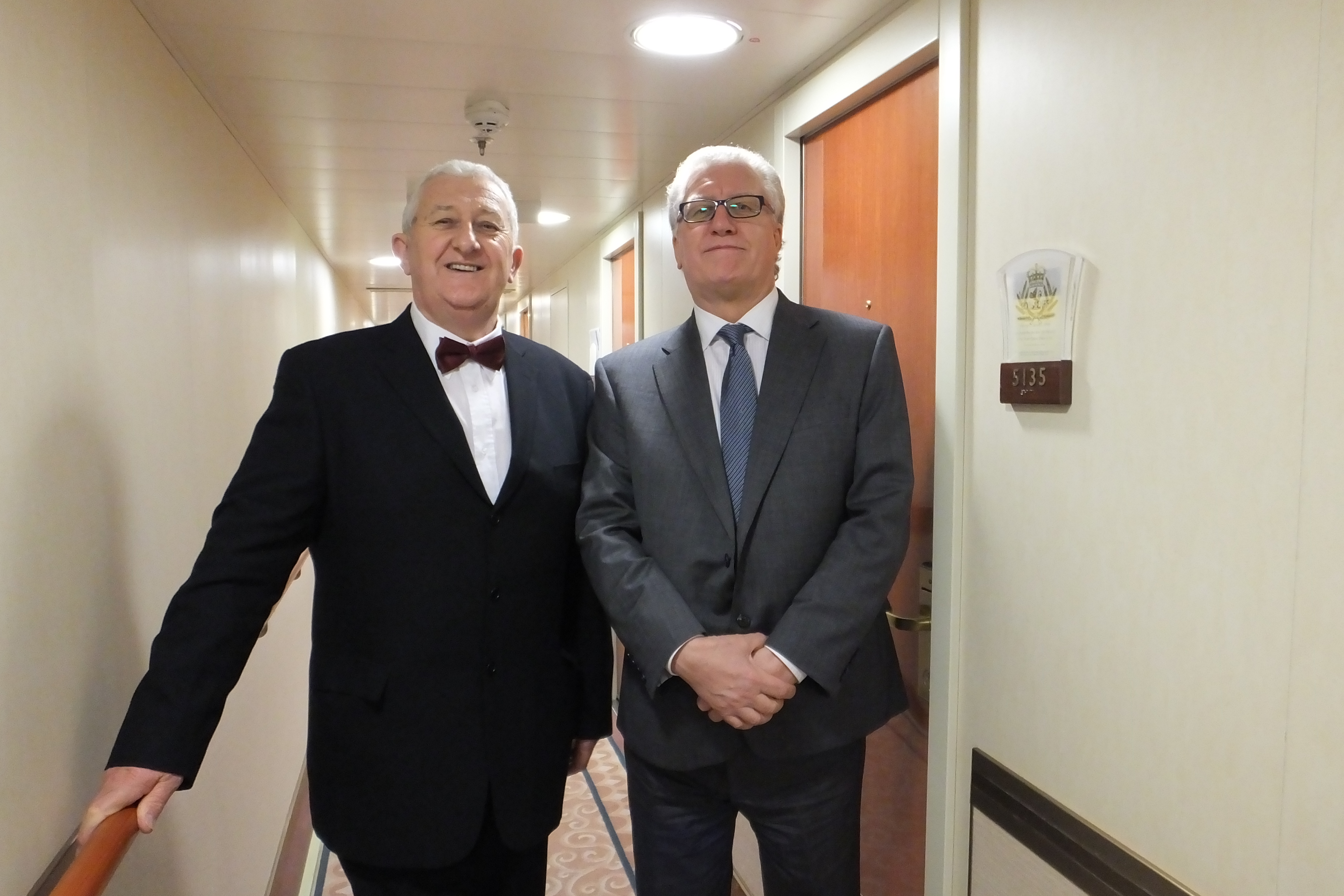 Swells on the ocean: Roy and Kie dressed up

KIE: I think I was just about to launch into my tenth rendition of Whole Lot Of Shakin’ Going On when I finally succumbed to sleep…

Sadly it would only be a few hours then it was time to get up, washed and dressed and head out for breakfast… such is life on an ocean wave for a cruise liner virgin.

We’d boarded the Queen Elizabeth at Southampton, quickly and without any fuss. The first thought that goes through your mind as you board is ‘wow, this ship’s a bit bigger than those on Windermere’, which was my last experience of life on the water.

We found our stateroom on deck five and opened the doors on the balcony to reveal… a lifeboat just below our deck. ‘That should come in handy if we have any Titanic moments,’ I thought.

So why was Jerry Lee Lewis’s song pounding around my brain? We’d left six hours late because the ship’s black box didn’t work and they had to send for a new one.  And I thought it was only planes that required black boxes.

The captain, a wonderful lady from the Faroes of all places, had decided to put her foot down as we were so late and we headed into the choppy seas of the English Channel, doing around 24 knots, I would assume.

We were certainly making up time, but my bed was vibrating and there were weird noises coming from every corner of the cabin – not counting big brother’s snores in the bed opposite.

Over breakfast I grilled brother Roy about the noise. ‘That was nothing,’ he said. ‘When I was a steward on the original Queen Elizabeth our quarters were below the waterline at the back of the ship just above the propeller. We never got any sleep.’

Our first day at sea and we went exploring. For a ship that is more than five years old it was in pristine condition and full of surprises. The attention to detail was staggering, this truly was one of the many wonders of the world.

Chatting with and observing the other passengers it was easy to see that this ship was built for one thing… relaxation.

Will I go on another cruise? Time will tell but next time I’m on Windermere and someone complains about the swell I shall just say: ‘You should have been on the Queen Elizabeth in January 2016…’