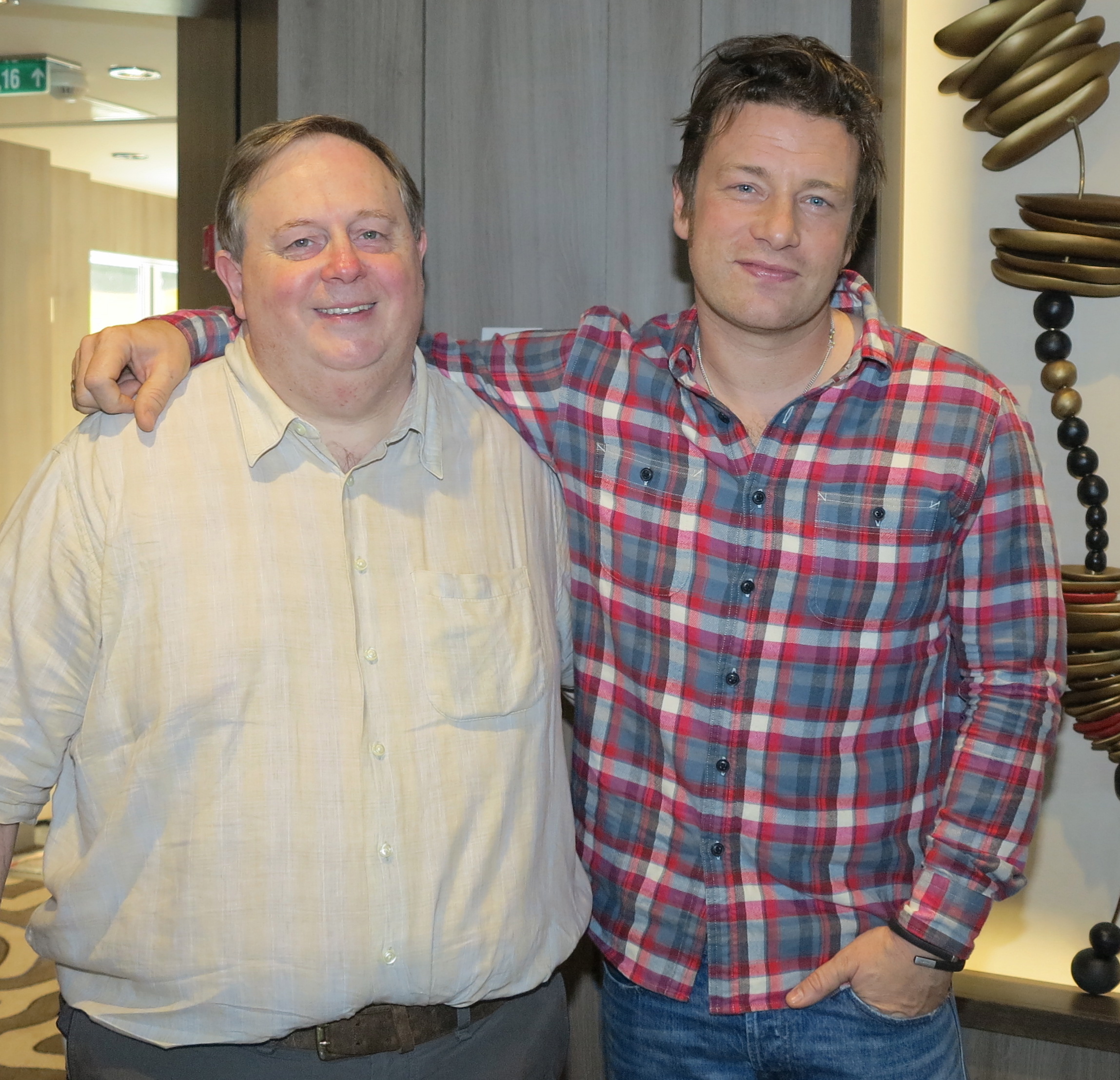 When I met Jamie Oliver at his new restaurant on board Quantum of the Seas today, it wasn’t the first time the British chef had been on a Royal Caribbean ship. In fact, he used to go away as a child with his parents on cruises three decades ago.

The 39-year-old entrepreneur, campaigner and broadcaster said the new ship, which boasts a pod that lifts passengers 300ft over the sea, dodgem cars and simulated skydiving, was ‘hard to get your head around’.

He told me: ‘I come from a family of publicans so we didn’t use to do holidays much but every couple of years we used to go on a cruise. I remember what it was like and I had a wonderful time and funnily enough it was Royal Caribbean cruises but it’s got to be 25 years since I did that – this is quite a different level really. It’s been a real learning curve for us.’

Oliver said that when he was first approached by Royal Caribbean to set up a branch of his Jamie’s Italian chain on board ‘I was naturally cynical because we’re quite awkward to work with. We generally rule out most people who want to work with us.

‘It’s been a challenge but they’ve done it and they’re amazing. Both of our teams have fallen in love with each other.’

The chef, among the first passengers on the ship which has arrived in Southampton from its German shipyard on its way to Florida, said Jamie’s Italian was small in Britain ‘but I think we’re quite good at it and we try and stand out. Value is really important, and over-delivering, but these guys [Royal Caribbean] are bloody good at their job. We’ve been very impressed by them, but the scale of what they do is quite shocking.

‘The exciting stuff is getting the restaurant open today. What’s nice for me is we have a really lovely small team and they stay dedicated to me. There’s 37 staff, one of the smallest restaurants on the ship, and I think the only one with outside seating. A normal Jamie’s Italian restaurant would have 120 staff.’

Oliver laughed off reports that he’s worth £240million. ‘I haven’t got that money because I really love what I do and the most precious thing is the team and staff I work with. I’ve paid for everything, we don’t have a corporate partner, we done it all ourselves in the past ten years.

‘Apparently I’m worth a few bob. It doesn’t feel like that. It’s still run like a family business – restaurants are high risk, high staff, high cost and low margins – but I do love the challenge of disrupting different parts of the food industry.

‘That wasn’t the intention on this ship because I think the Royal Caribbean team were already disrupting [the standard of food in the cruise industry] and I can’t take any credit for that.

He said he set up Jamie’s Italian because he thought the restaurant scene was also rubbish, adding: ‘I think we’ve done a really good job of making everyone step up a gear. It’s a tough market and you’re always watching your back but that’s what my dad brought me up to do. He was one of the early gastropub dudes. He wasn’t happy that pub food was crap and I’ve applied the same things I’ve learnt from mum and dad to do it with everything that I’ve done.’

Oliver said he was sure the restaurant on board Quantum – and its sister ship Anthem, which will sail out of Southampton from next year – would be a success.

But he admitted: ‘I can safely say, me and my dad, 30 years ago on a Royal Caribbean cruise when we left Florida and went round the Caribbean, we’d never have thought that we would one day have a restaurant on a ship.’

One thought on “EXCLUSIVE: Jamie Oliver discusses his first floating restaurant on Royal Caribbean’s Quantum of the Seas”