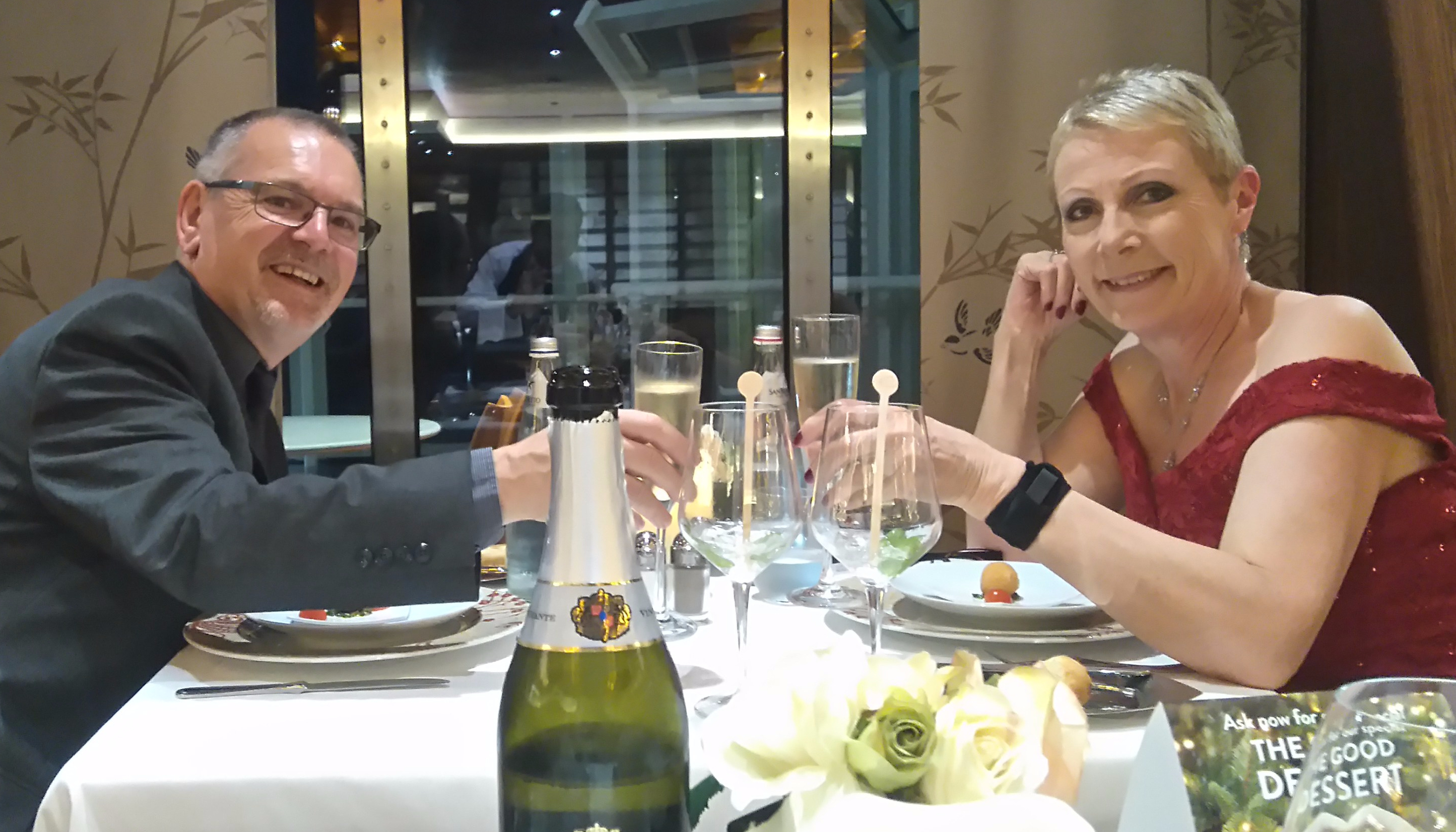 For their sixth cruise, Rob England, a 62-year-old exam invigilator, and his writer wife Anne, 59, couldn’t resist a bargain trip around the Mediterranean on the Costa Diadema at the end of November 2017. But how did they get on with life on board an Italian cruise ship? Here is their guest blog…

It was time to sail outside our cruising comfort zone. Switching our after-dinner cappuccinos for espressos and upping our pasta consumption rate to waistline-endangering levels, we enthusiastically embraced our inner Italians and set off to sample the European experience with Costa.

So, to paraphrase Mrs Merton, what first attracted us to this seven-night cruise on the Costa Diadema with flights and a night’s hotel stay in Barcelona for a base price of £349 per person? Well, although cost was a major consideration, the Western Med itinerary took in places we hadn’t visited, except Civitavecchia and the embarkation port – and who doesn’t love the opportunity for time in the Catalan capital? So the chance to visit Palma de Mallorca, Palermo, Savona and Marseille was also a draw. 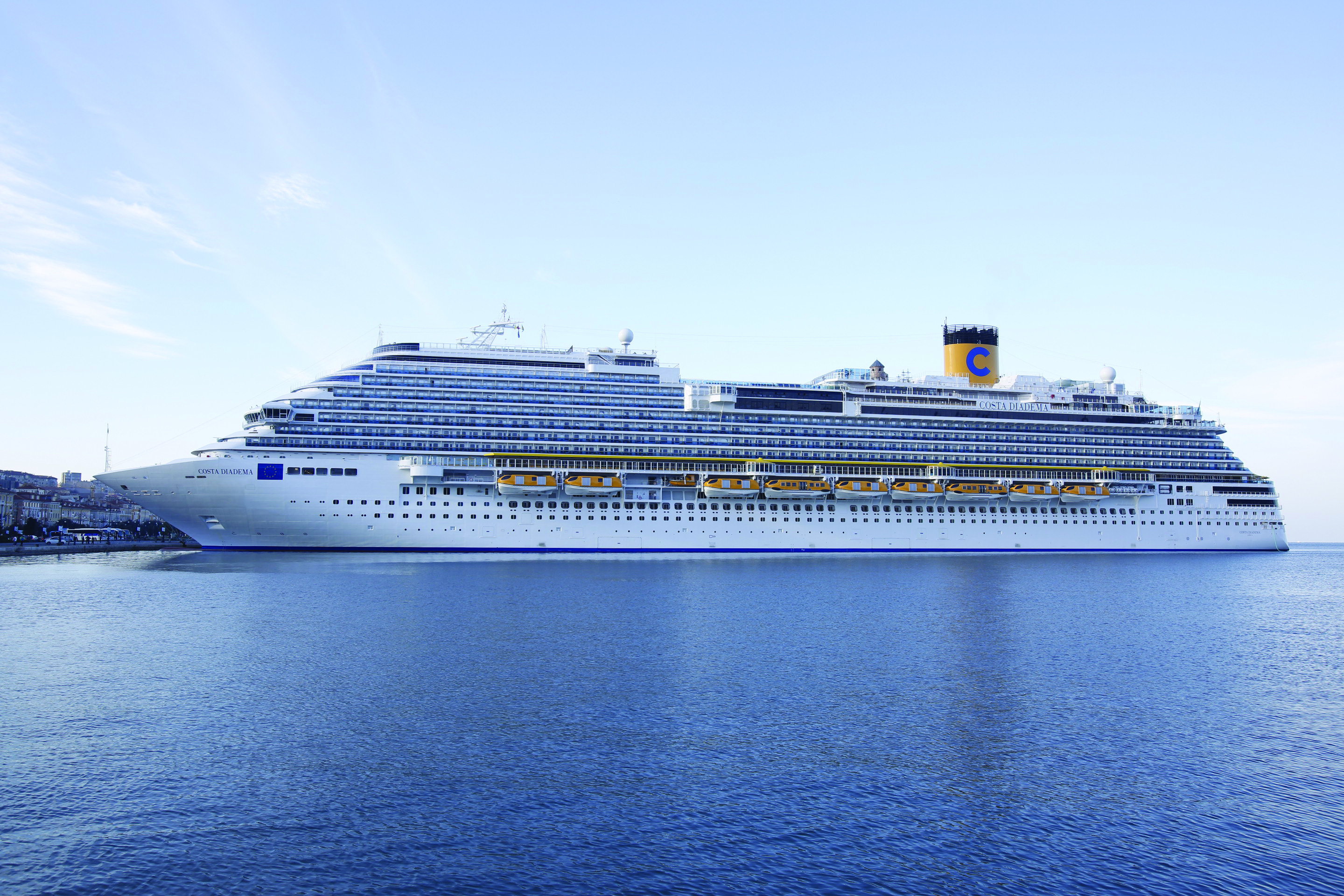 This was a cheeky, spur-of-the-moment pre-Christmas break and, unlike previous cruises where we had a balcony, this was a guarantee inside cabin. We weren’t expecting the bells and whistles of Celebrity or Holland America but we were hoping for an acceptable cruise at this price.

First impressions were good. Because it’s possible to embark at any port on the itinerary only a proportion of the 4,000 passengers are coming and going at any one time. However, there was one significant downside to this – more on which later. Key cards are left in the open cabin, rather than being issued at check-in, which also sped up the process.

The Diadema is mainly in-your-face glitz and glamour – think Versace meets Vegas. Bold and brash in most of the public areas but mercifully more understated in the cabin, which had plenty of storage, a comfy bed and a decent-sized shower room. 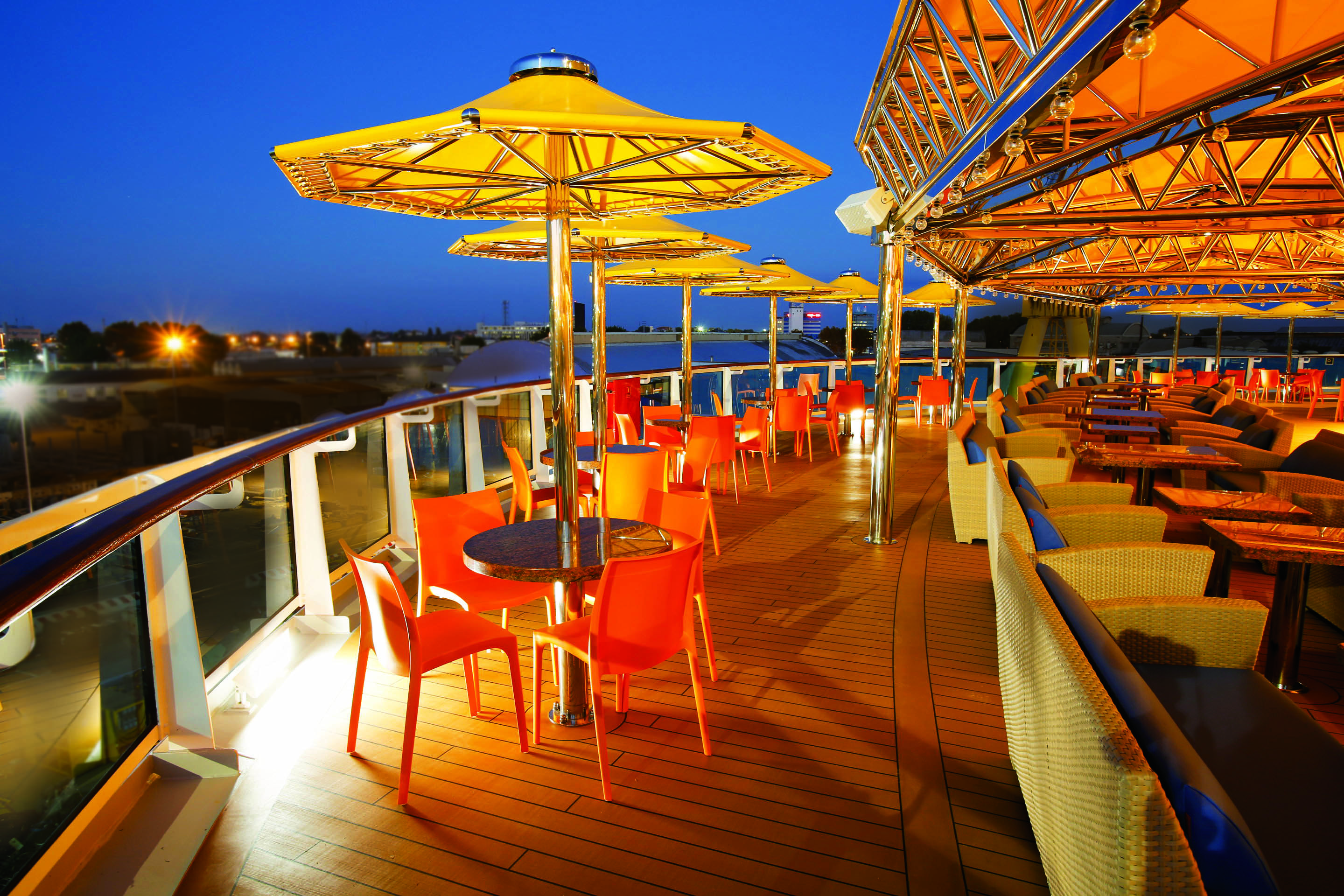 Our fellow guests were almost all Italian, Spanish, French or German, with native English speakers very much in the minority. We’ve never been troubled by this, but it does make for very long announcements over the public address system.

We knew before we left that the Diadema has the lowest staff-to-passenger ratio of the principal cruise ships, but how would that be reflected on board? It soon became clear that the dining experience was where the cost savings were mostly being made. There were no assistant waiters, no wine waiters – just a single person serving their allotted tables, although their task was simplified to an extent by the use of tablets rather than pen and paper. It generally worked well but it was clear that even a small hiccup could derail the system.

This was most apparent on the one sea day when, for the only time, we ventured into the main dining room for lunch. Our waiter disappeared completely for 30 minutes to the bafflement of all the tables. A complaint to the maître d’ was of little use. 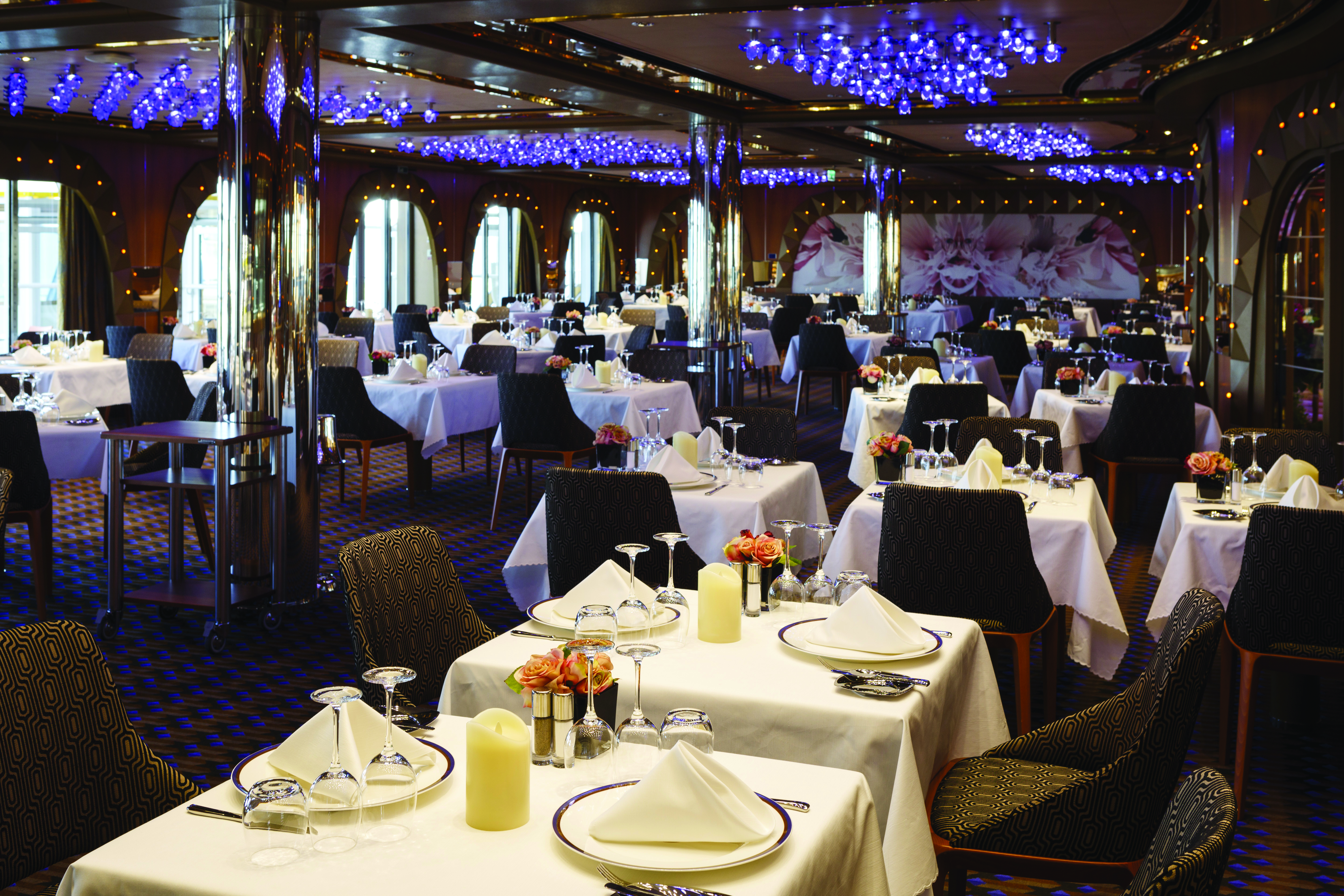 Food was generally of a good standard and, unsurprisingly, the better dishes were the pastas, gnocchi and risottos although, bizarrely, the only way to enjoy pizza on this Italian ship was by paying extra in the dedicated pizzeria!

Breakfasts were naturally geared to the continental cold meats, cheeses and pastries. And cake – so much cake. There was no hot food in the buffet and in the main restaurant it was also self-service with heated trays for the scrambled eggs, hash browns and so on, with a smattering of waiters to take orders for the themed breakfasts, including a Full Monty English – it’s sausage and bacon, Jim, but not as we know it. Breakfasts, despite a reasonable choice, were by far the least exciting of the day’s offerings.

Apart from the pizzeria, which morphed into a pay-extra burger bar late in the evening, there were two other speciality restaurants – one of which, Samsara, served up exquisite food with immaculate service in, by the Diadema’s standards, refined surroundings. We were less impressed by the Club Diadema restaurant, which is the dining area for suite guests and extra cost for the hoi-polloi. It wasn’t much of a step up from the regular restaurant but the enhanced service levels were a significant bonus. 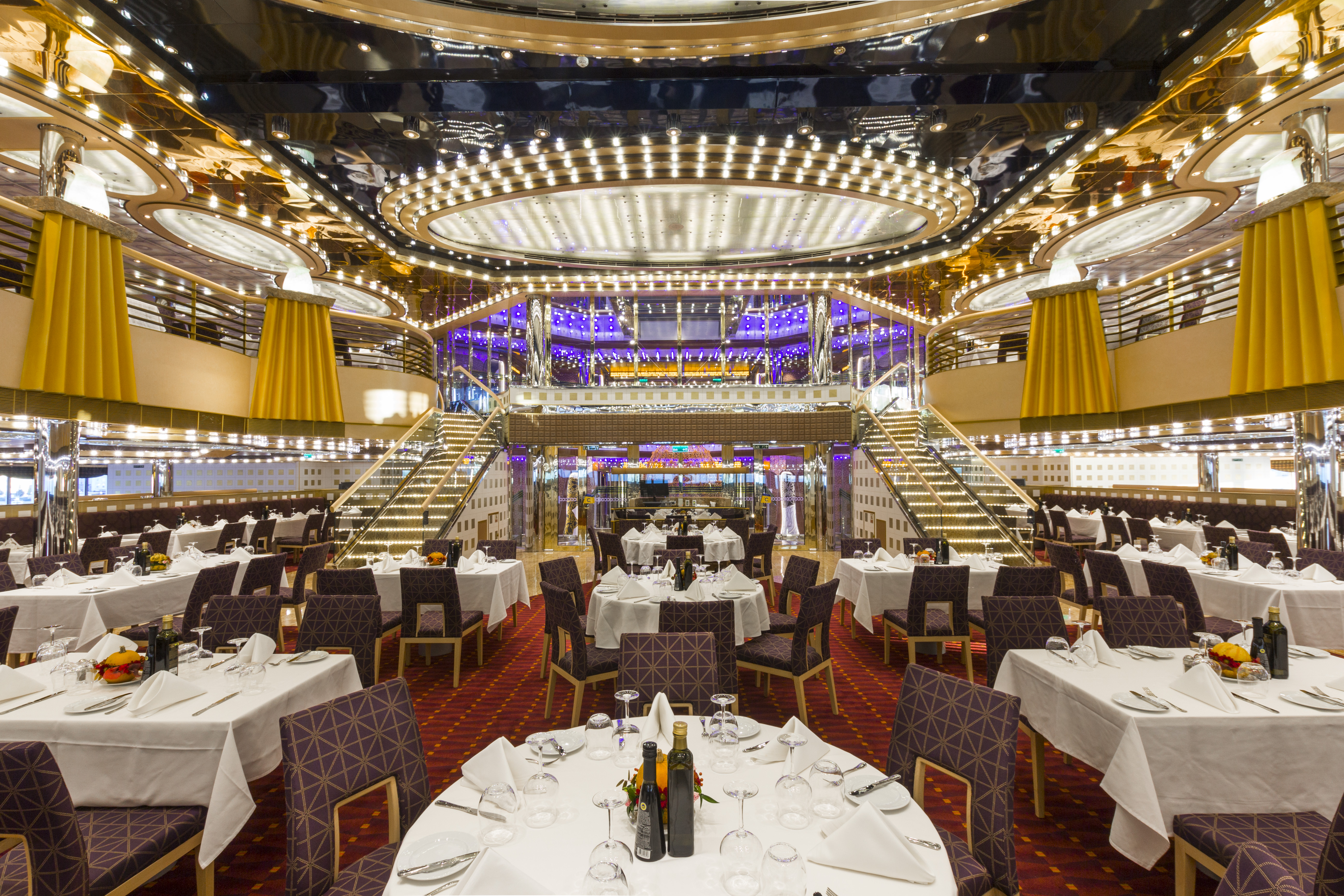 The mainly far eastern staff were uniformly pleasant and helpful in all areas with our steward, Michael, possibly the most efficient and friendly we have experienced. A special tip of the hat to the entertainments officer who effortlessly conducted a quiz in six languages with no-one being disadvantaged.

Entertainment in the main theatre was polished enough with an international flavour to suit everyone. We’d often finish the evening in the Country Rock Club, where we had the unique experience of watching French-Vietnamese guests line dance to an Italian band’s rendition of REM’s Losing My Religion!

Scheduling could be a little haphazard at times; for example, no one seemed to know what time the pool opened. Depending on who you asked, it was variously 7.30am, 8am or 8.30am. When the keen swimmer amongst us did manage an early-morning swim, it was foreshortened by heart-stoppingly cold water. Back down to reception: was the pool not heated? Apparently not. Fine in the Med in July, not so much in December. 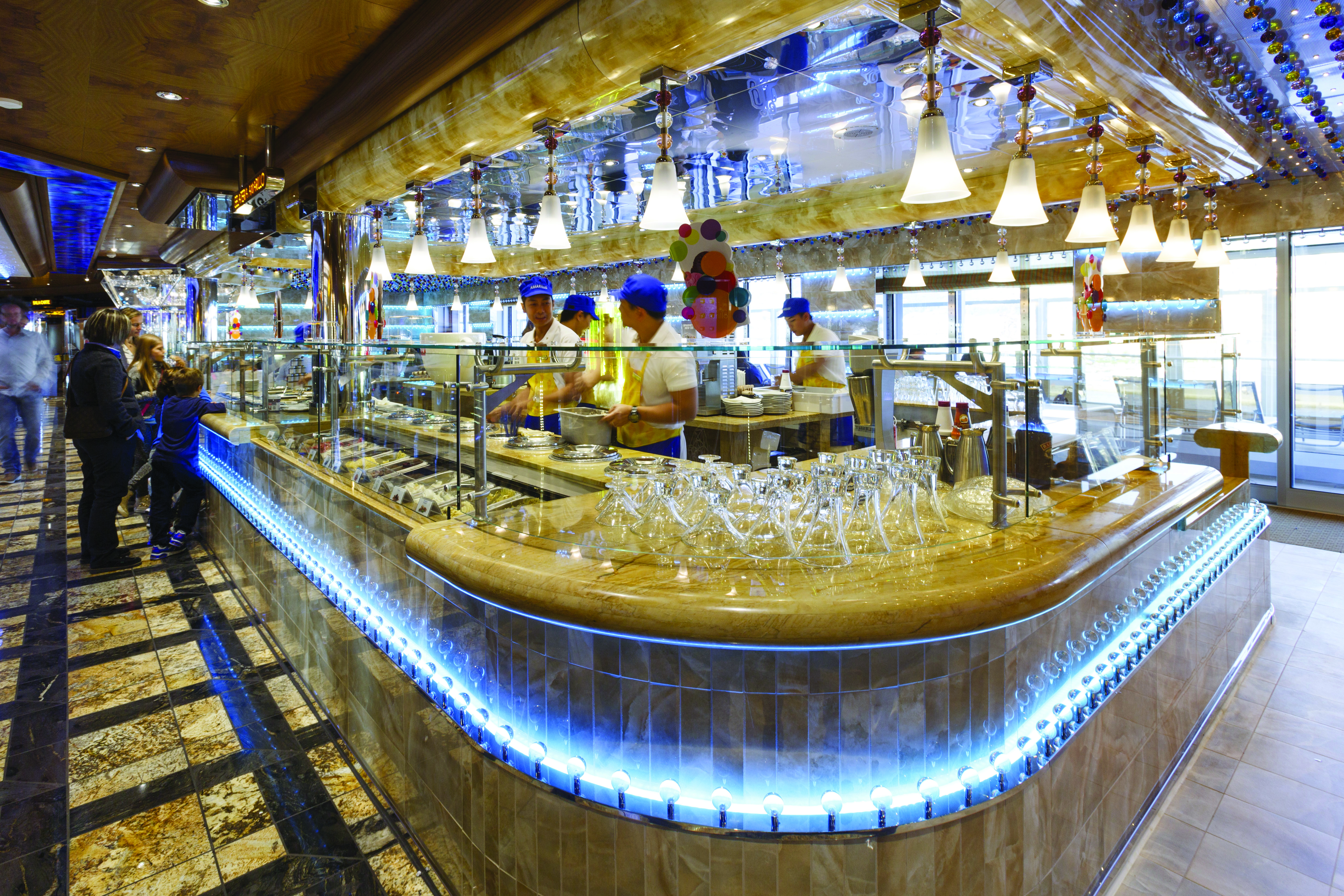 The one major fly in the ointment came late in the cruise where the downside to picking up in every port – and having the ability to sell shorter segments – became apparent. Evidently some of the new arrivals at Civitavecchia were hardcore party cruisers, which is fine in the public areas, but when the party continued in their cabins in the early hours it was an issue which was not properly resolved before the return to Barcelona.

So, would we sail with Costa again? Well, we’re reserving judgment on that one. With a clutch of cruises with other operators under our belts, we’re accustomed to a little more pampering than we got this time. But for a last-minute jaunt that brought some welcome sunshine to the end of the year, it was undeniably great value for money.

Have you sailed with Costa? What did you think? Please leave your comments below

4 thoughts on “Guest blog: It didn’t Costa lot but our cheap Med cruise came at a price…”