The gleaming new Viking Sea is what’s classed as a ‘small’ cruise ship. You wouldn’t call it that if it were parked in your back garden because it’s still 745ft long, nine decks high and carries 930 passengers.

But this 48,000-ton newcomer, which set sail on its maiden voyage this month, is dwarfed in port by its rivals from other companies and four Viking Seas could comfortably fit into the world’s biggest ship, Harmony of the Seas, also launching this year. 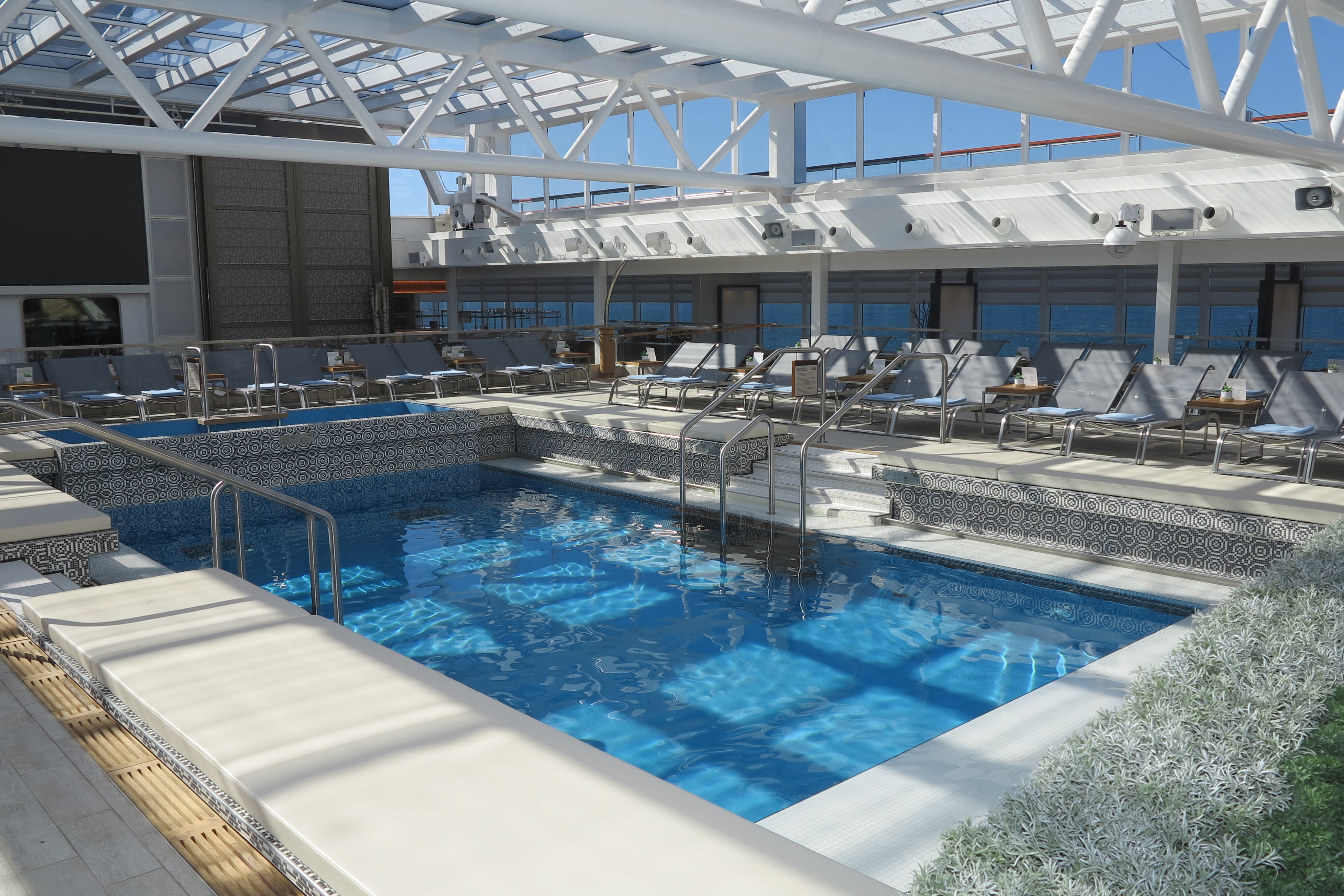 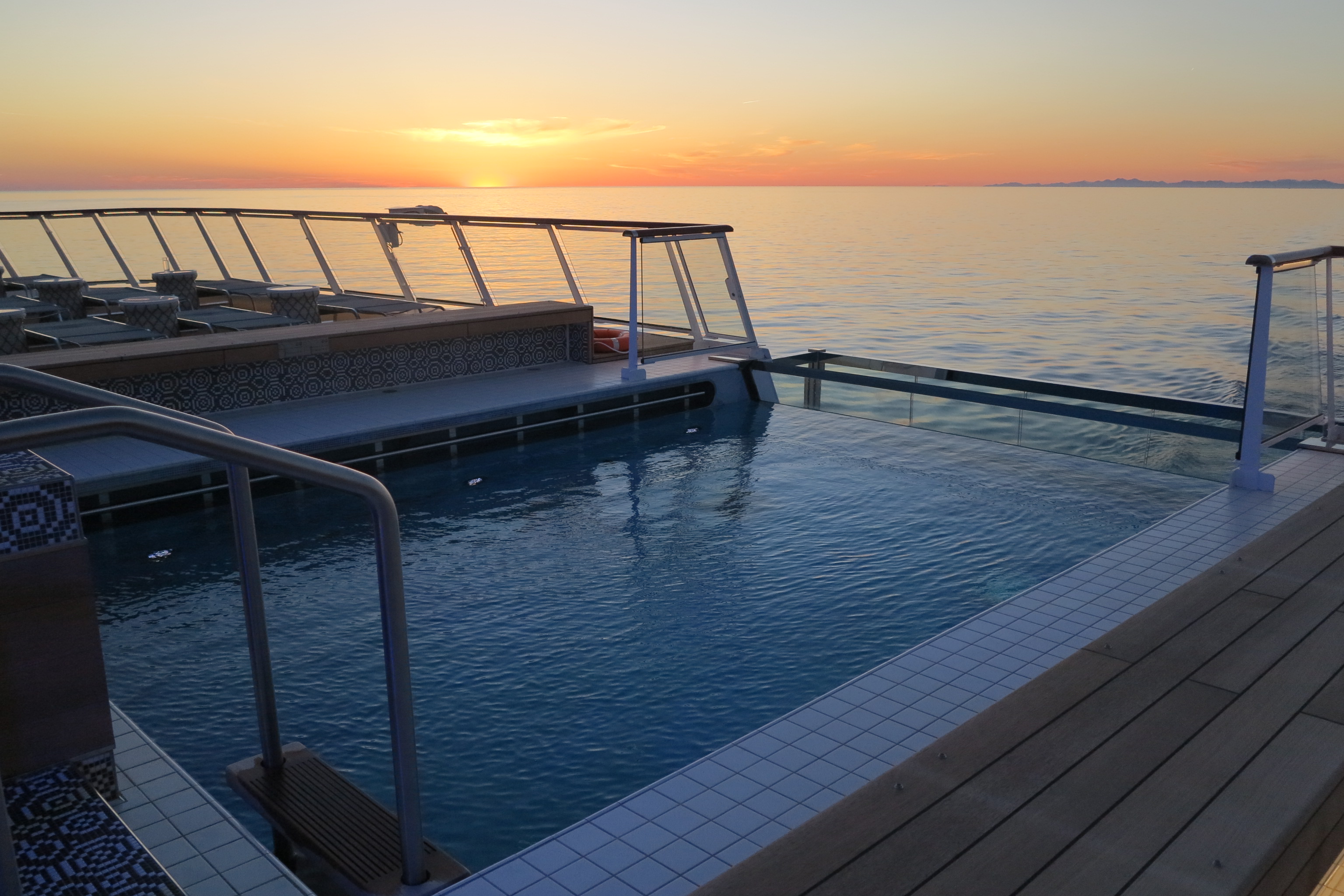 Infinity and beyond: The pool at the stern of the ship, seen at twilight

With Viking, though, small is beautiful. The colours are muted and calming, with plenty of light wood and pale fabric, and there is lots of open space.

All around the ship, but especially in the three-deck atrium, are inviting chairs and armchairs, strewn with cushions, arranged into cosy groups and surrounded by artworks, shelves and books.

The cool and airy restaurants are largely made up of tables of two and four. There always seem to be plenty of sun loungers available, even by the two main pools – an infinity one at the rear and another under a retractable roof in the middle. 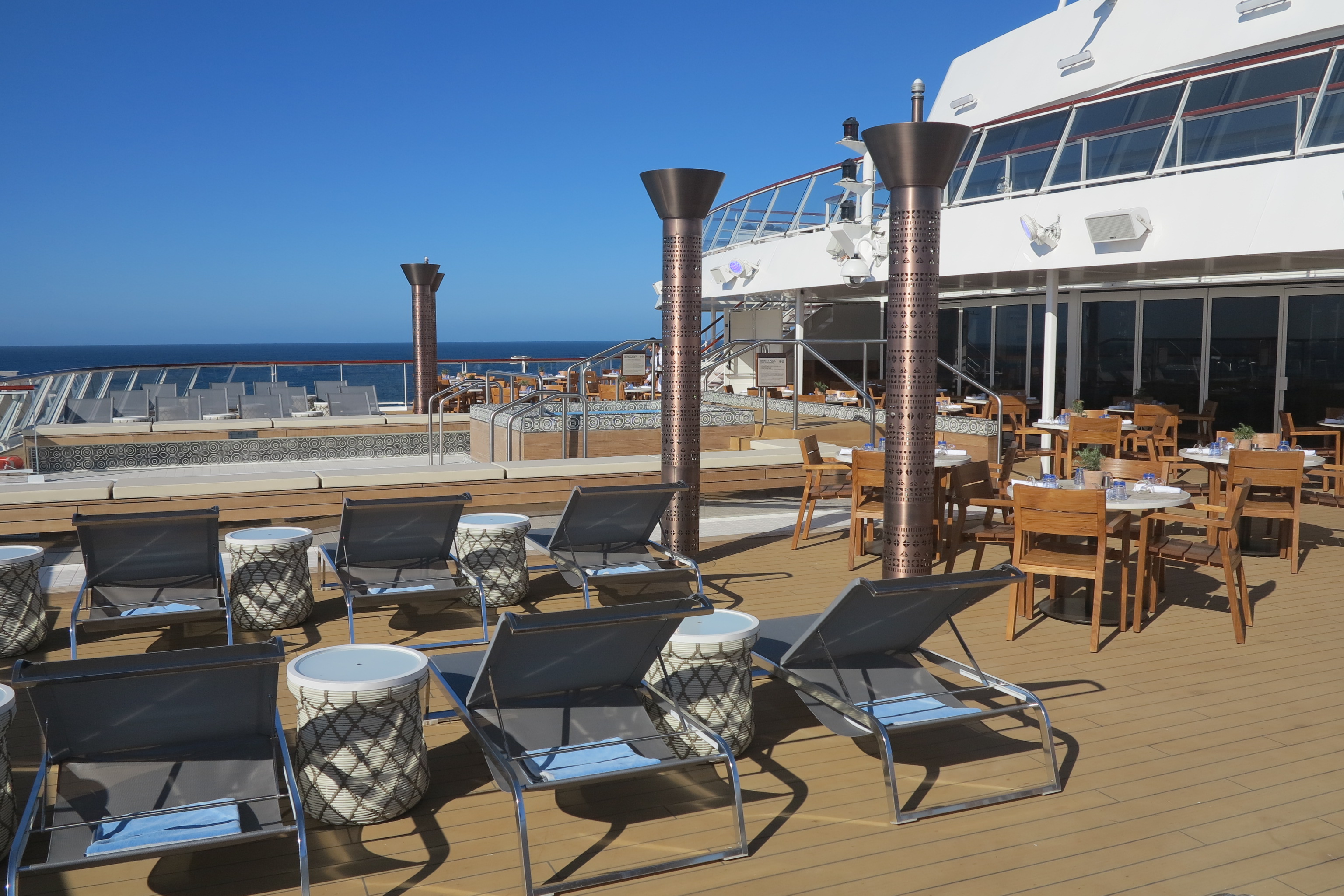 Catching the sun: The Aquavit Terrace surrounding the infinity pool 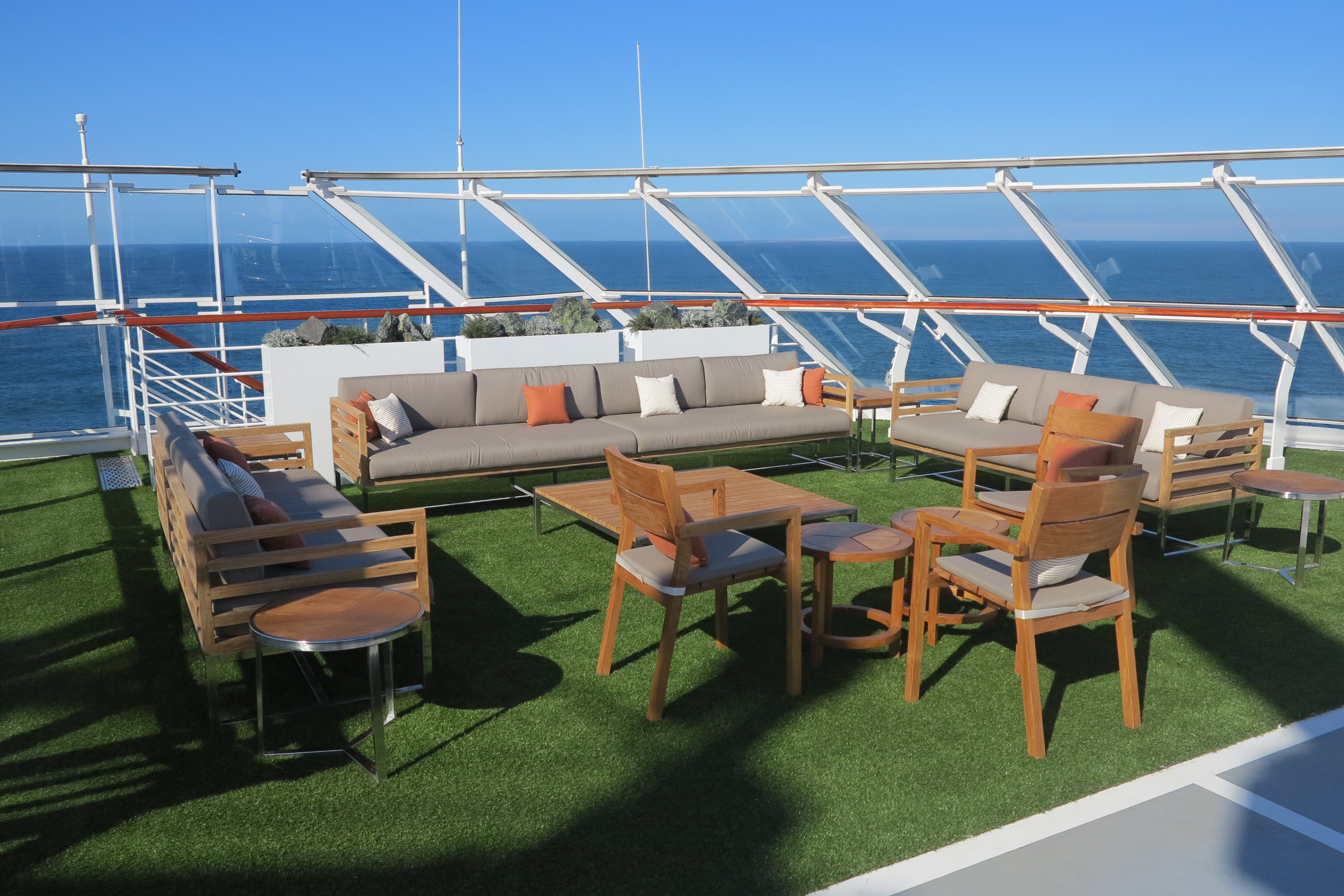 Cosy: A seating area on the top sports deck

With Sea, and its first ocean-going ship Star last year, Viking has brought the best of its river cruise experience and added some great new touches. Free wifi and a daily shore excursion are included in the price.

The atmosphere is informal (no need for suits or dinner jackets) and friendly – you get more smiles per hour from this crew than any other I’ve known.

Viking has used the extra space on its ocean-going ships to give every cabin a balcony, provide a choice of restaurants and bars, and even find room for a spa, a nightclub, theatre and two small cinemas.

Homely: Part of the Explorers’ Lounge at the front of the ship 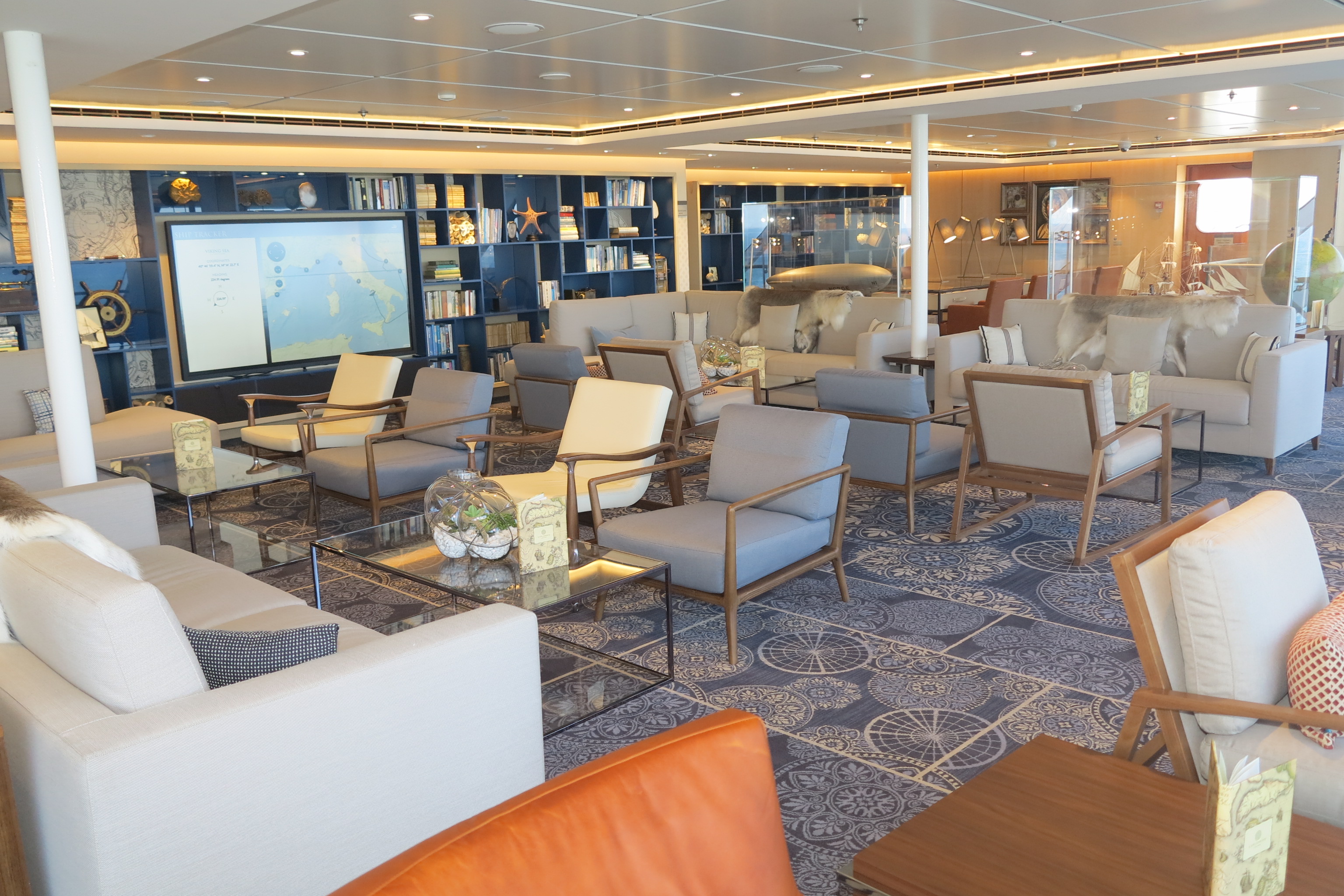 Top of the charts: The upper floor of the Explorers’ Lounge 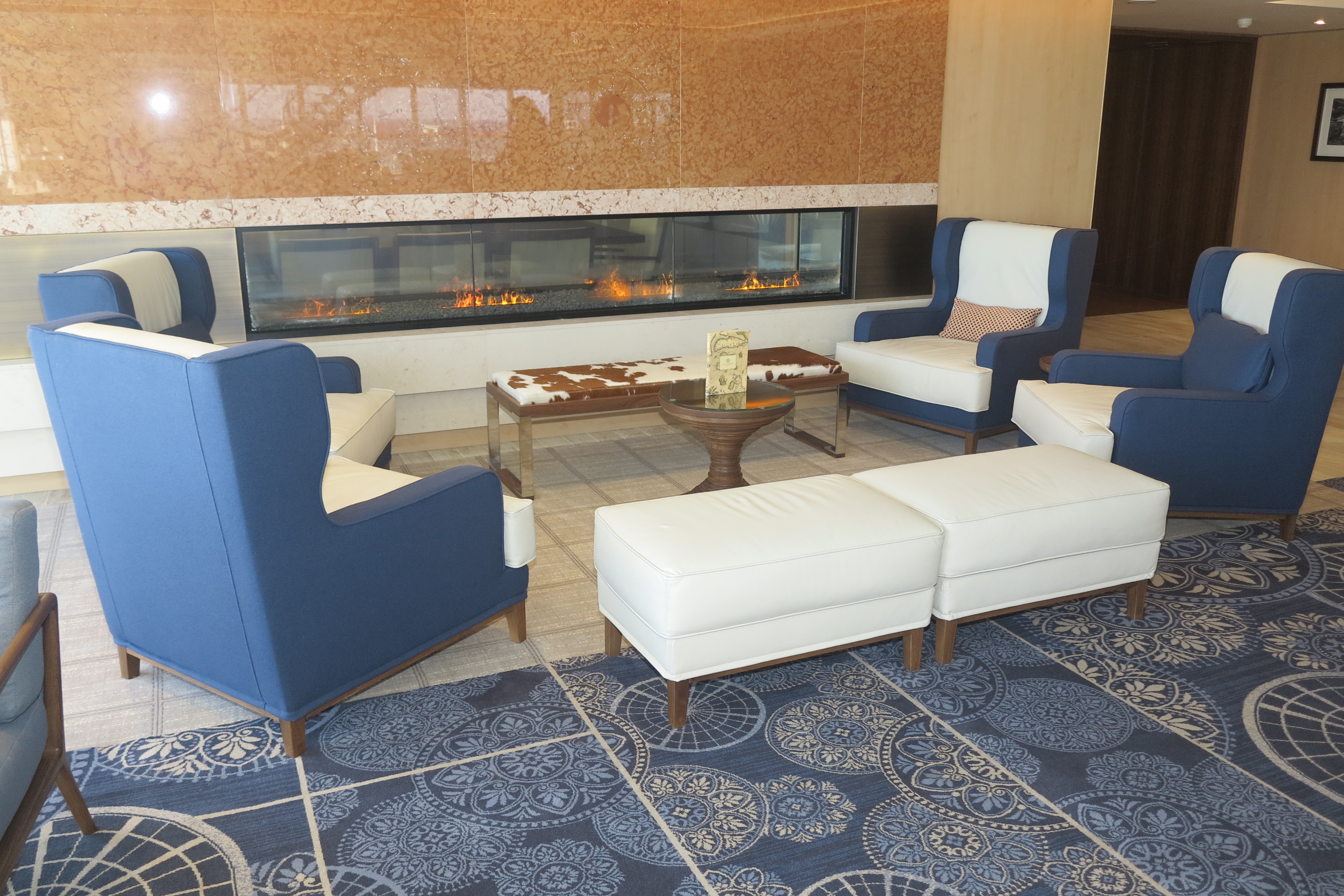 Fireside: The Explorers’ Lounge even has soothing ‘flames’ made of steam and light

Favourite among the dining options for us was the World Cafe, an easy buffet that’s open for breakfast, lunch and dinner, serving salads, freshly carved meat, sushi, ice creams and desserts. Tables were always available, even on a sea day.

There’s also the Restaurant, with waiter service, the Chef’s Table with fixed menu, Manfredi’s Italian, the Pool Grill for hot dogs and burgers, Mamsen’s for snacks – and 24-hour room service. None of these carries an extra charge. 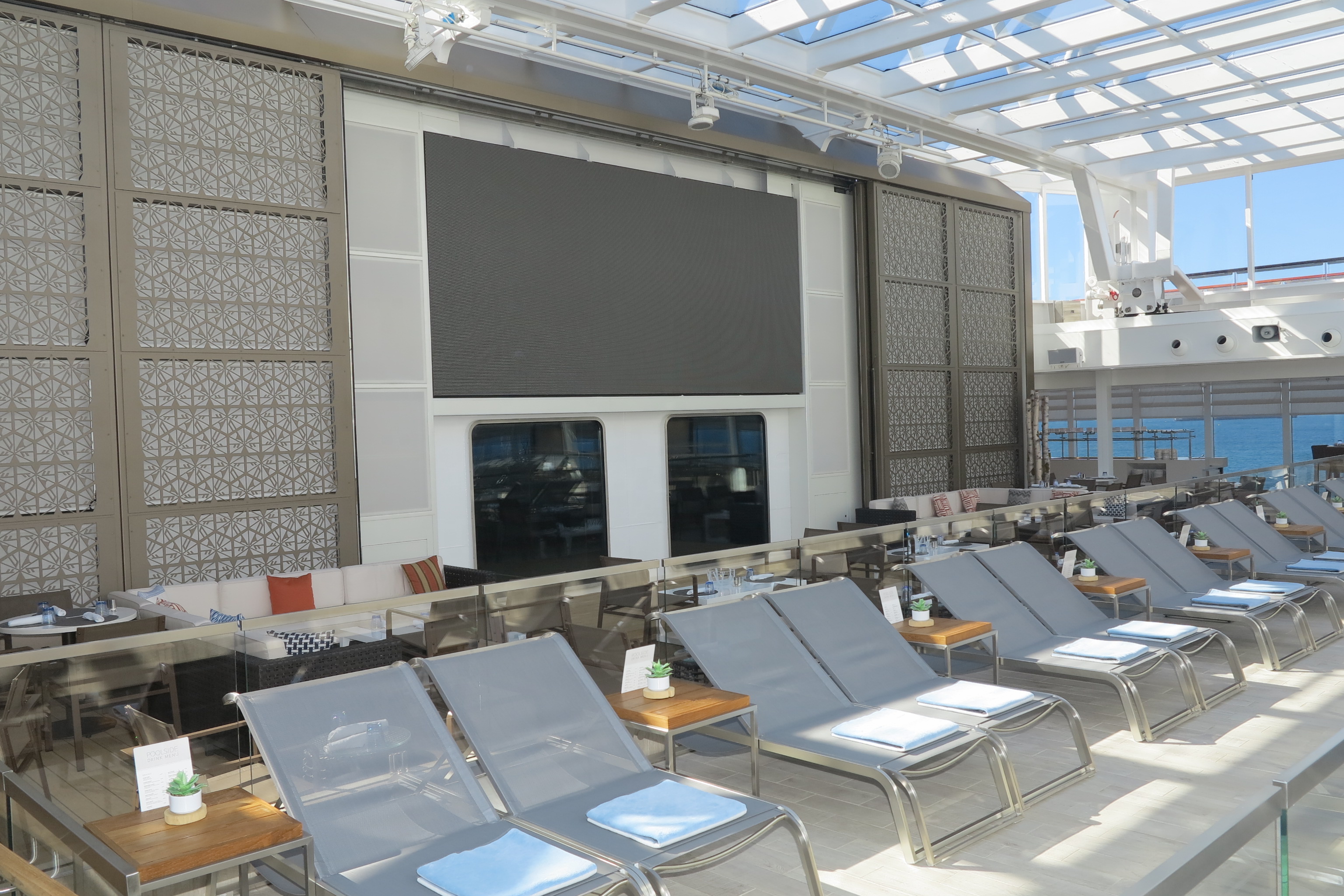 Screen time: Movies can be watched on deck 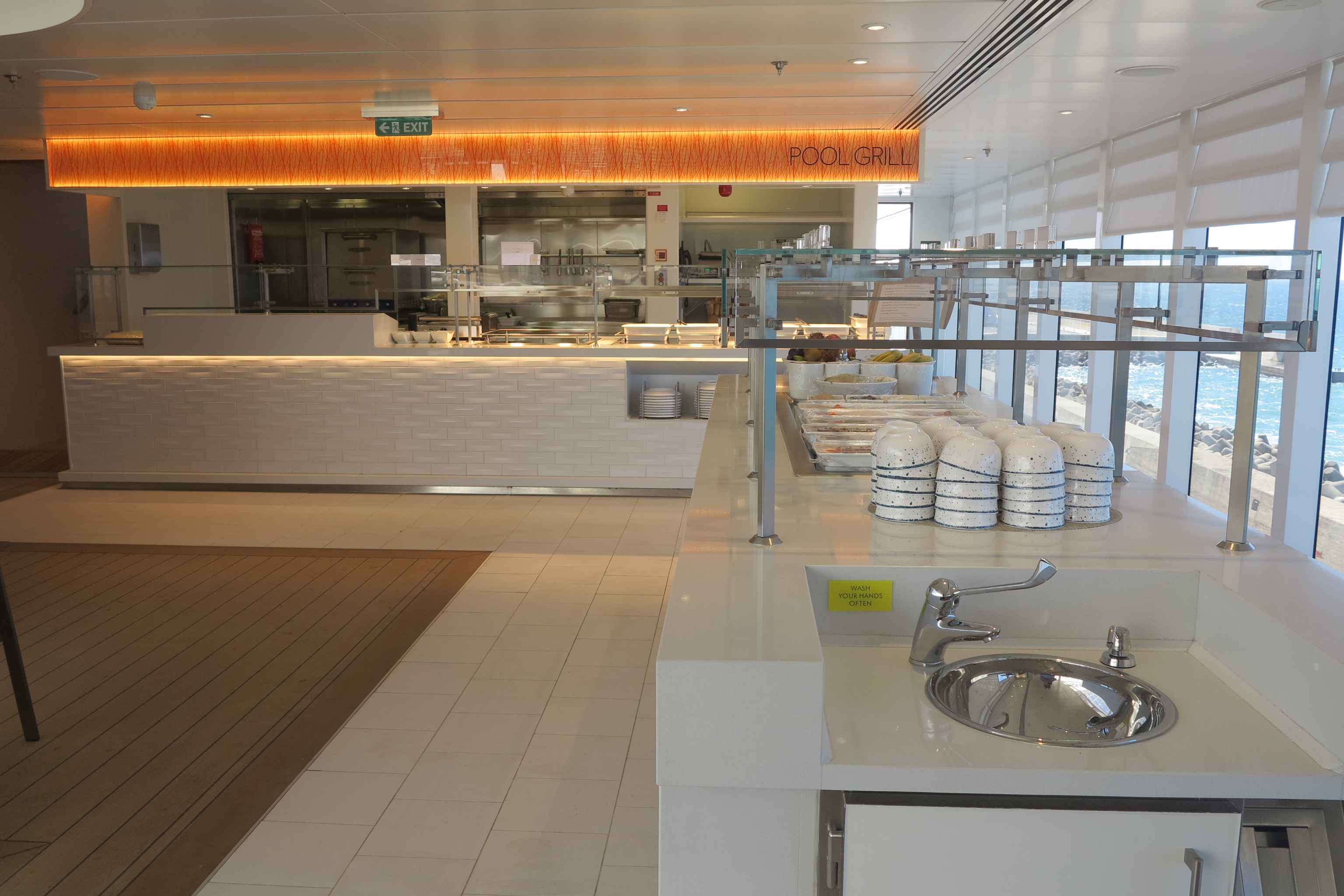 Here’s another plus – alcoholic tipples are included with meals and a drinks package is available if you want to indulge at other times. Viking’s system means you never have to show your room card for a drink or sign a bill.

Waiters simply ask for your room number, which calls up your photograph on their phone, and your account is charged with an included tip. 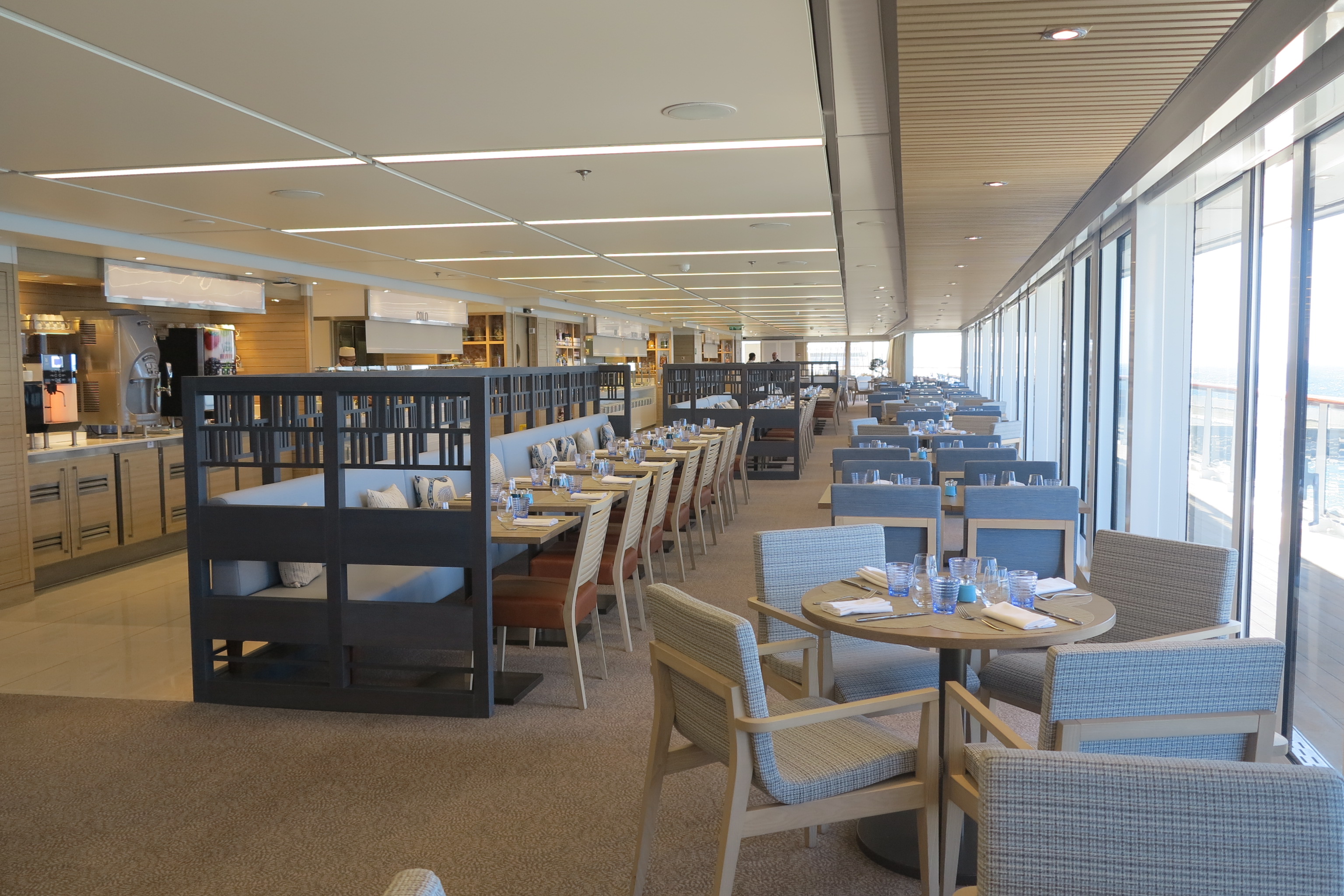 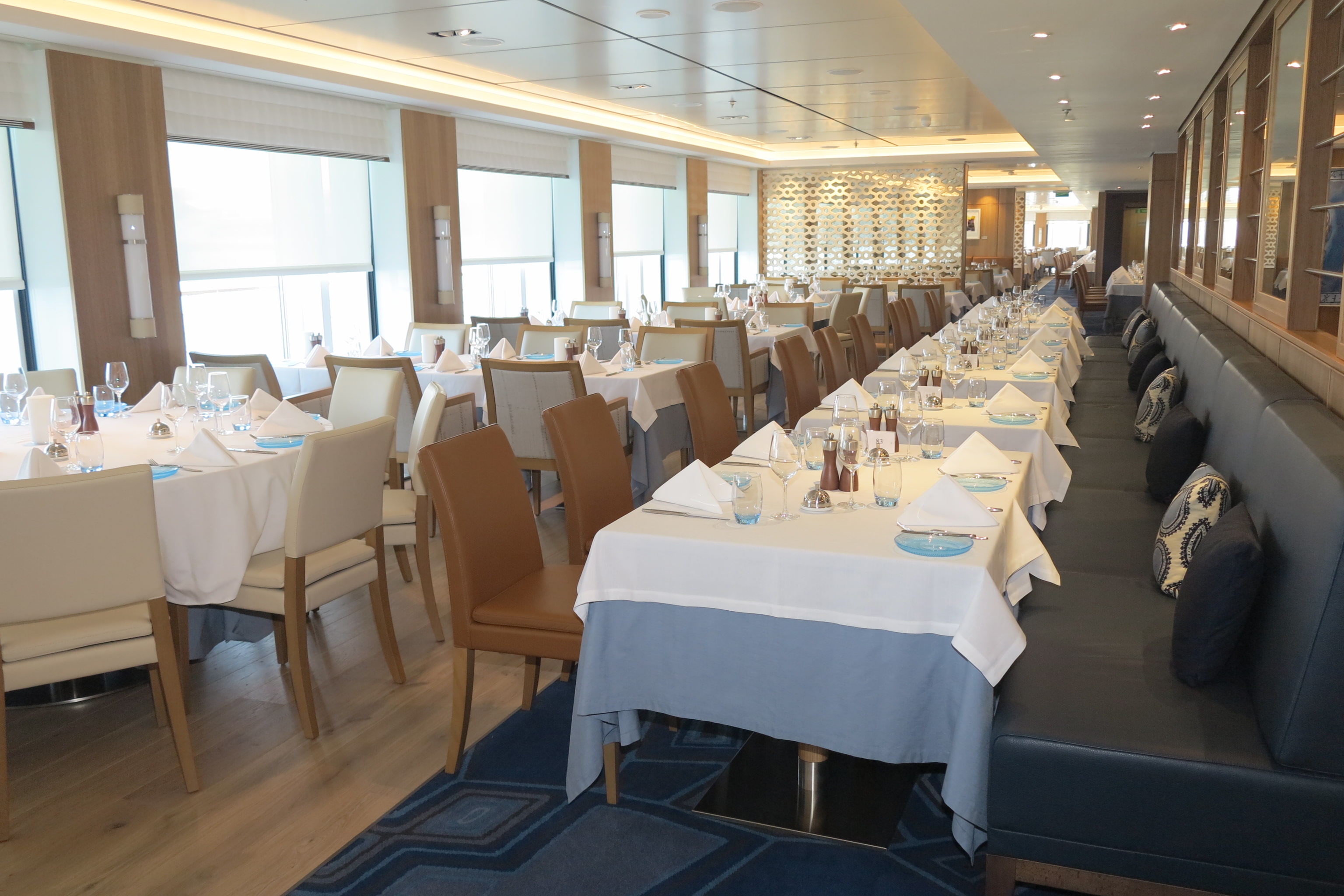 Dining: The Restaurant offers an a la carte menu 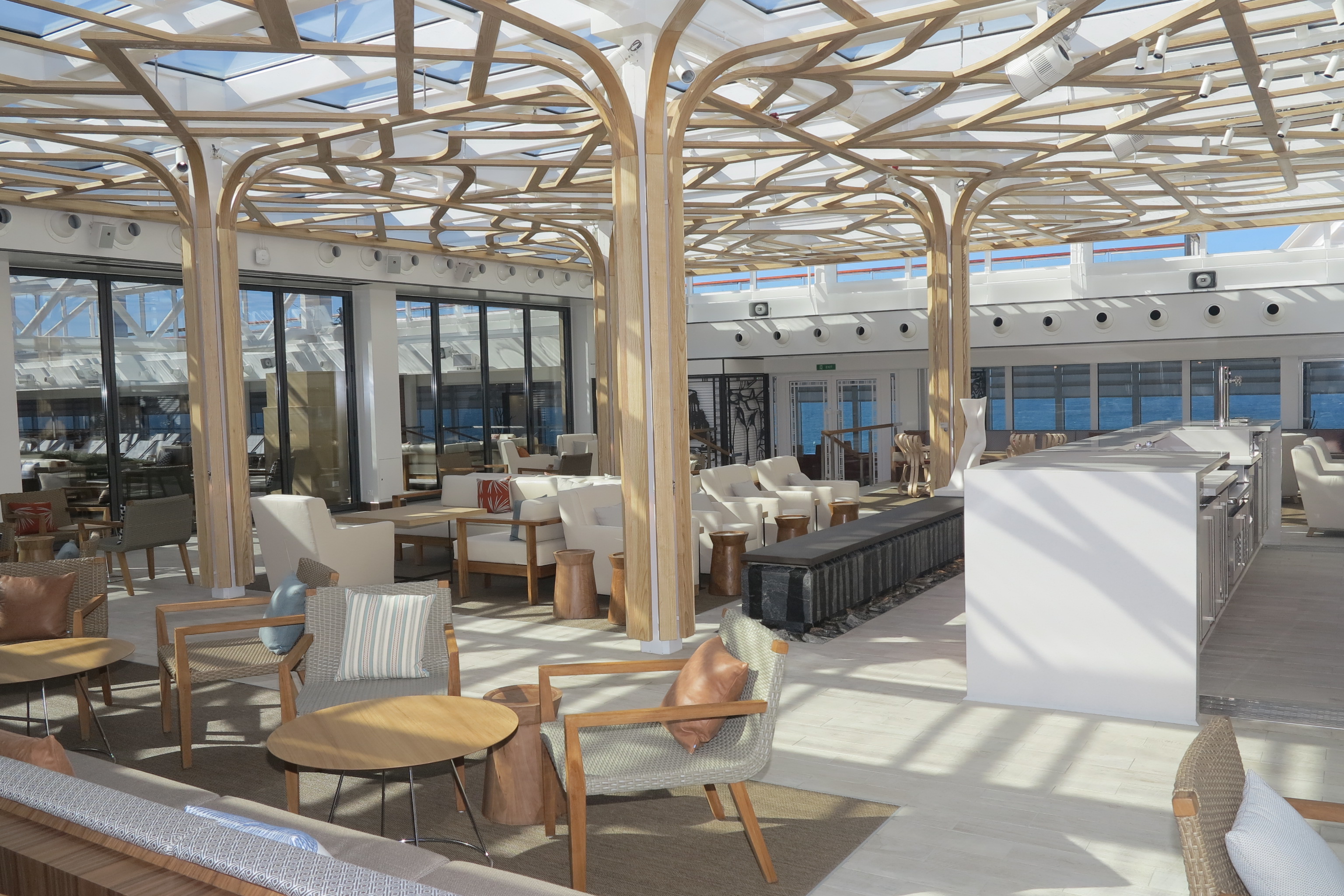 At the top of the ship on Deck 9 is the sports area, above the two-storey Explorers’ Lounge at the front. On Deck 7 is the main pool, World Cafe and Wintergarden, which serves afternoon tea. Below three decks of cabins is the Restaurant – no bookings required – Torshavn lounge, shops, cinemas, theatre and promenade deck.

Finally, on Deck 1, is the Chef’s Table, Italian restaurant, gym and spa. You’ll also find the Kitchen Table, which isn’t only a place but an experience. A maximum of 12 guests sign up to go to a local market with the executive chef and choose food which they help prepare in the evening and then eat in their separate room. 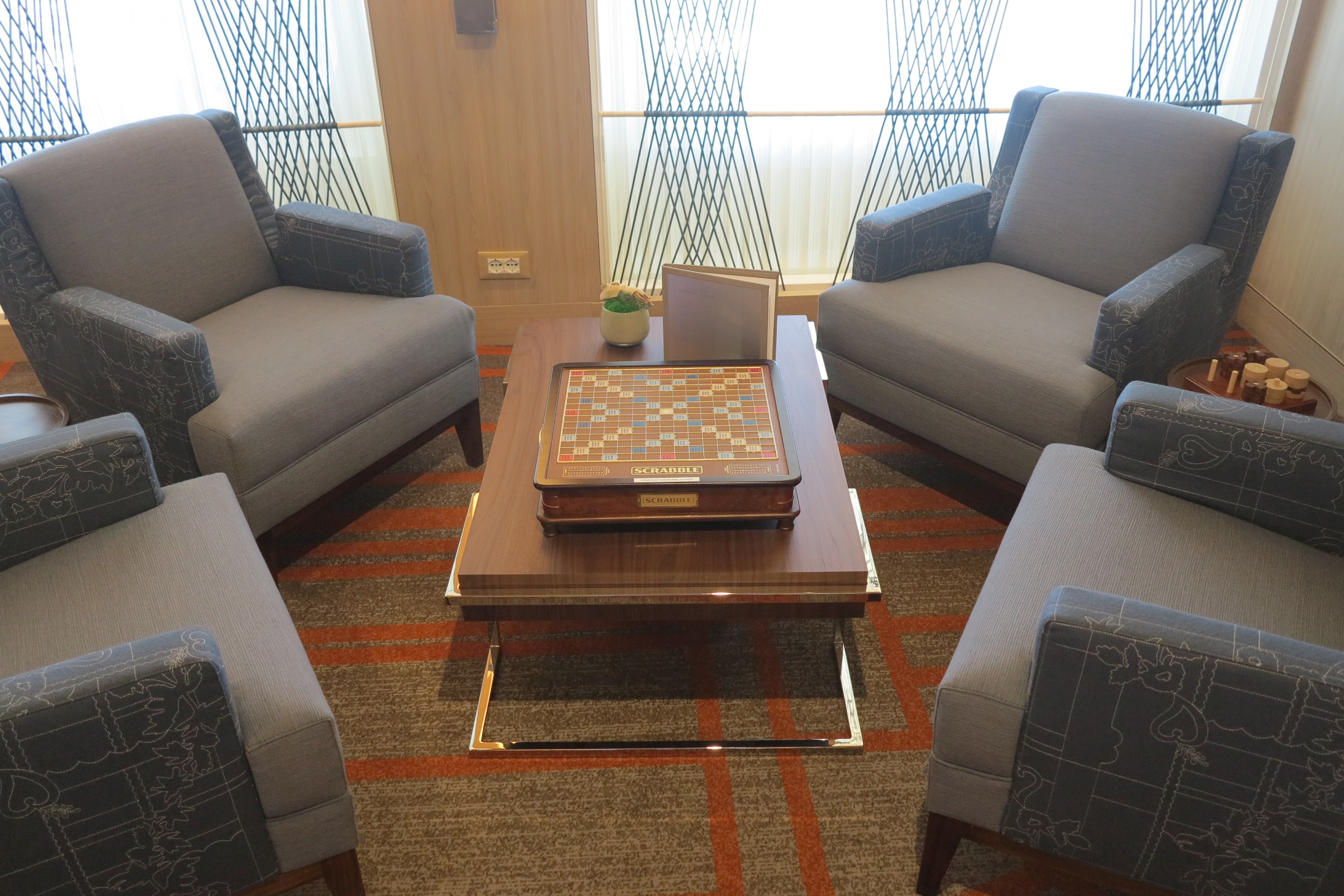 Anyone for Scrabble?: Board and electronic games are available in the Living Room 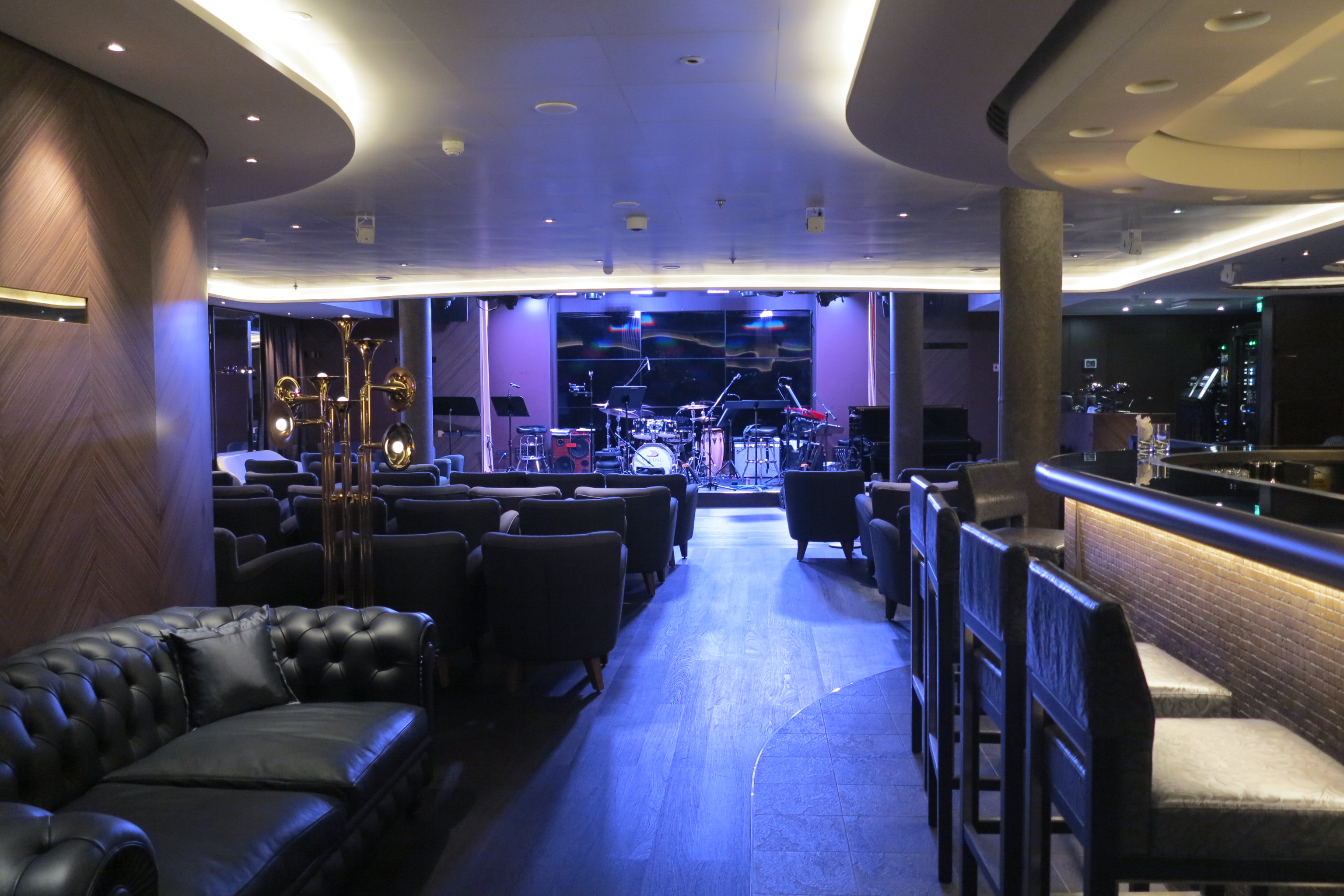 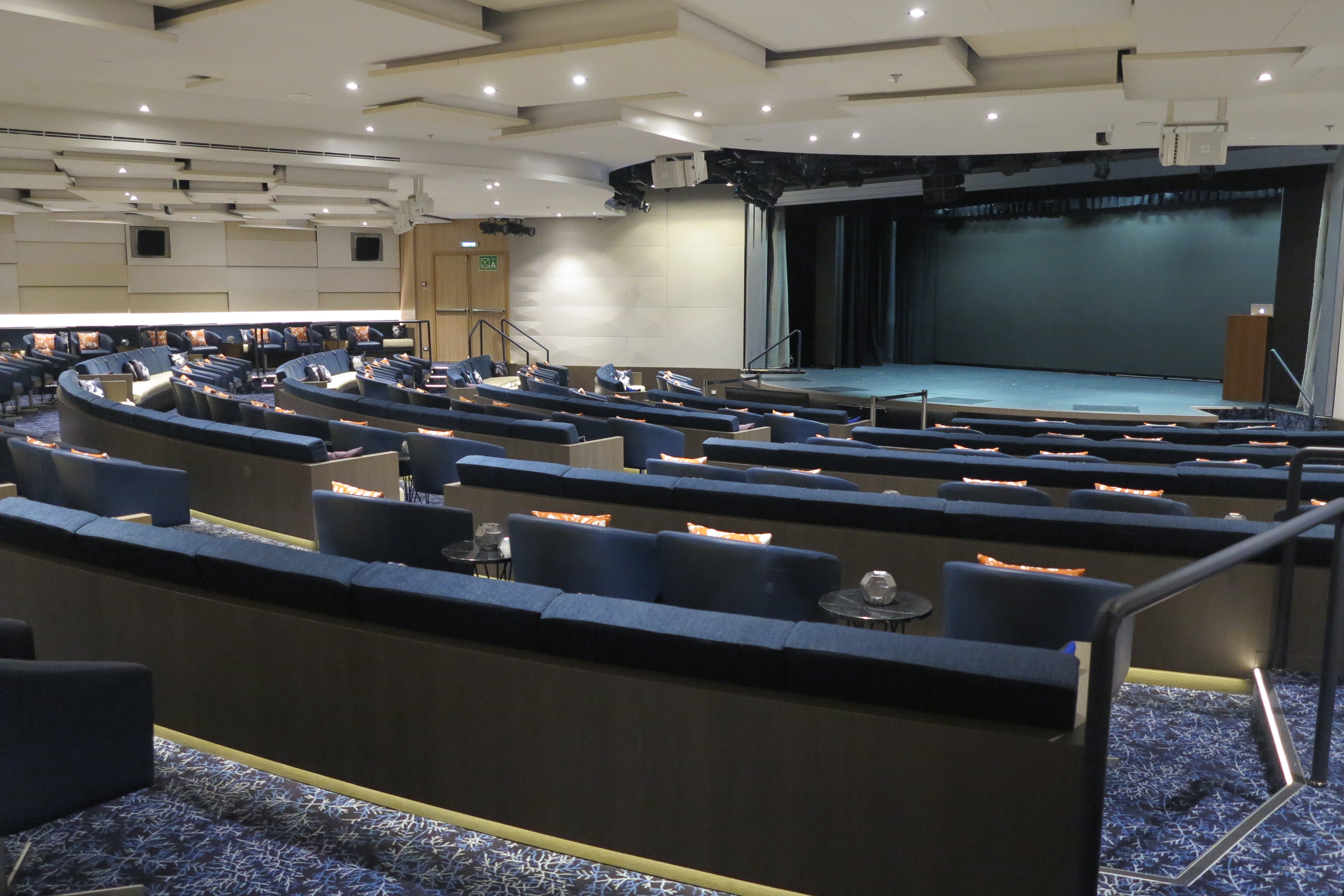 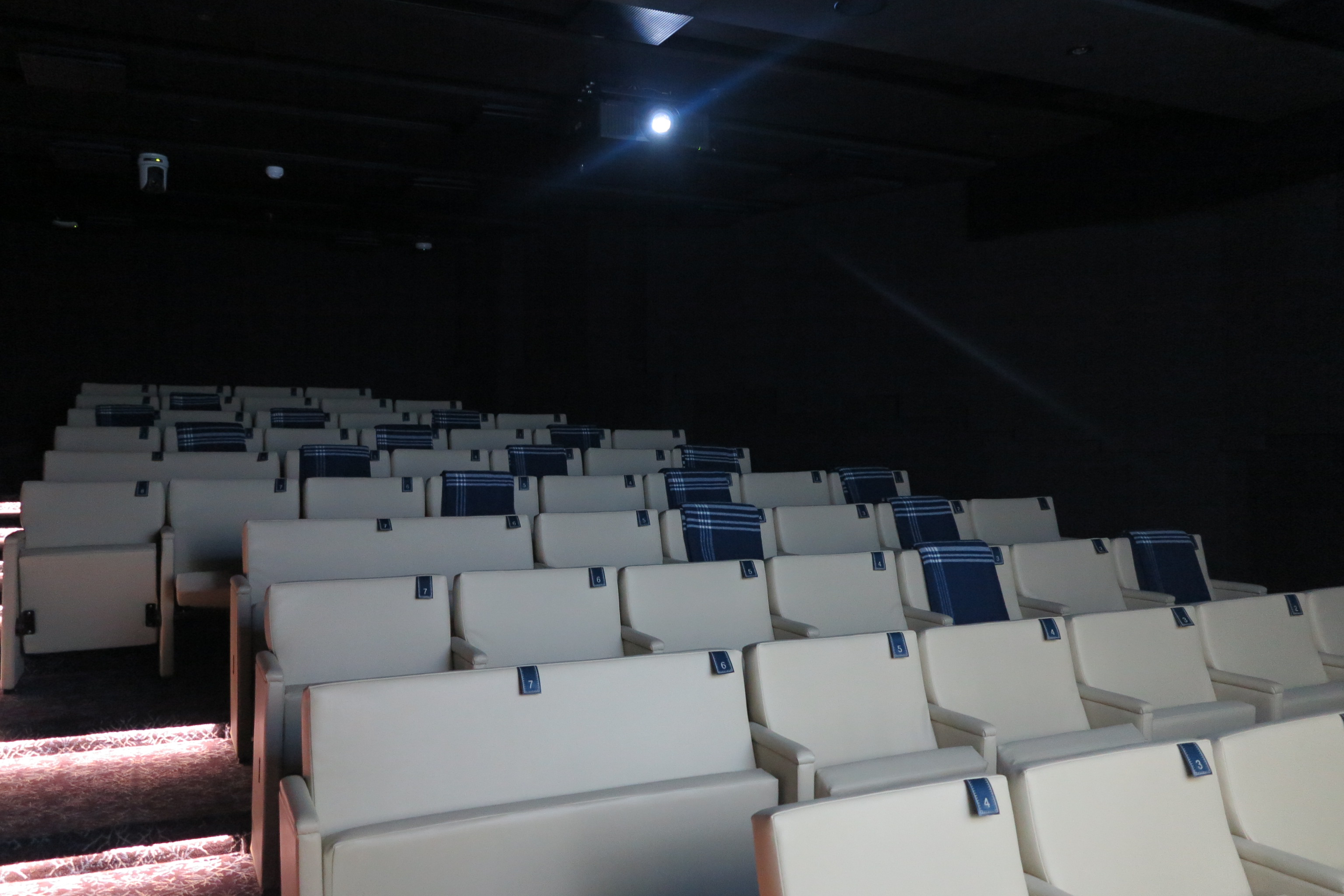 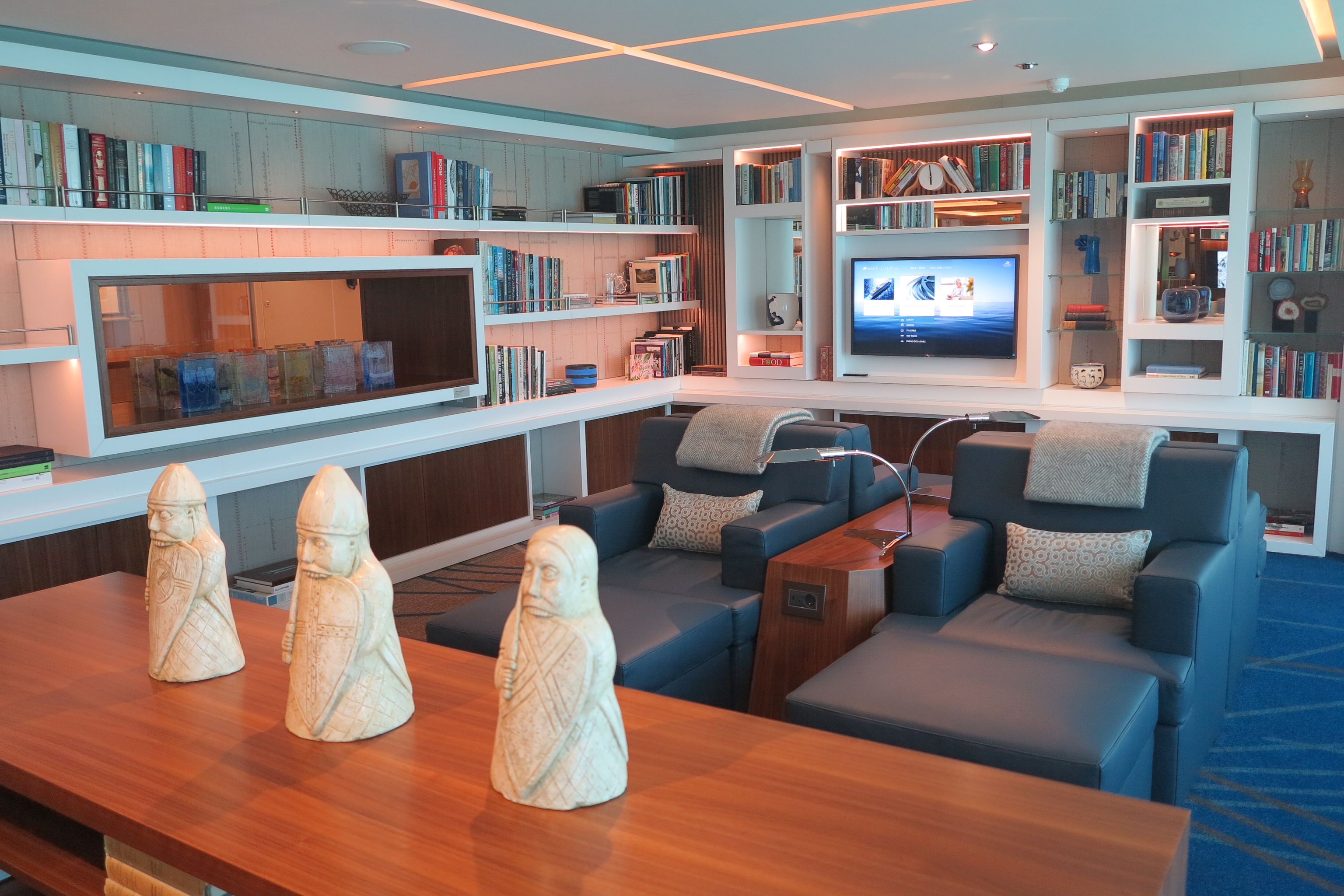 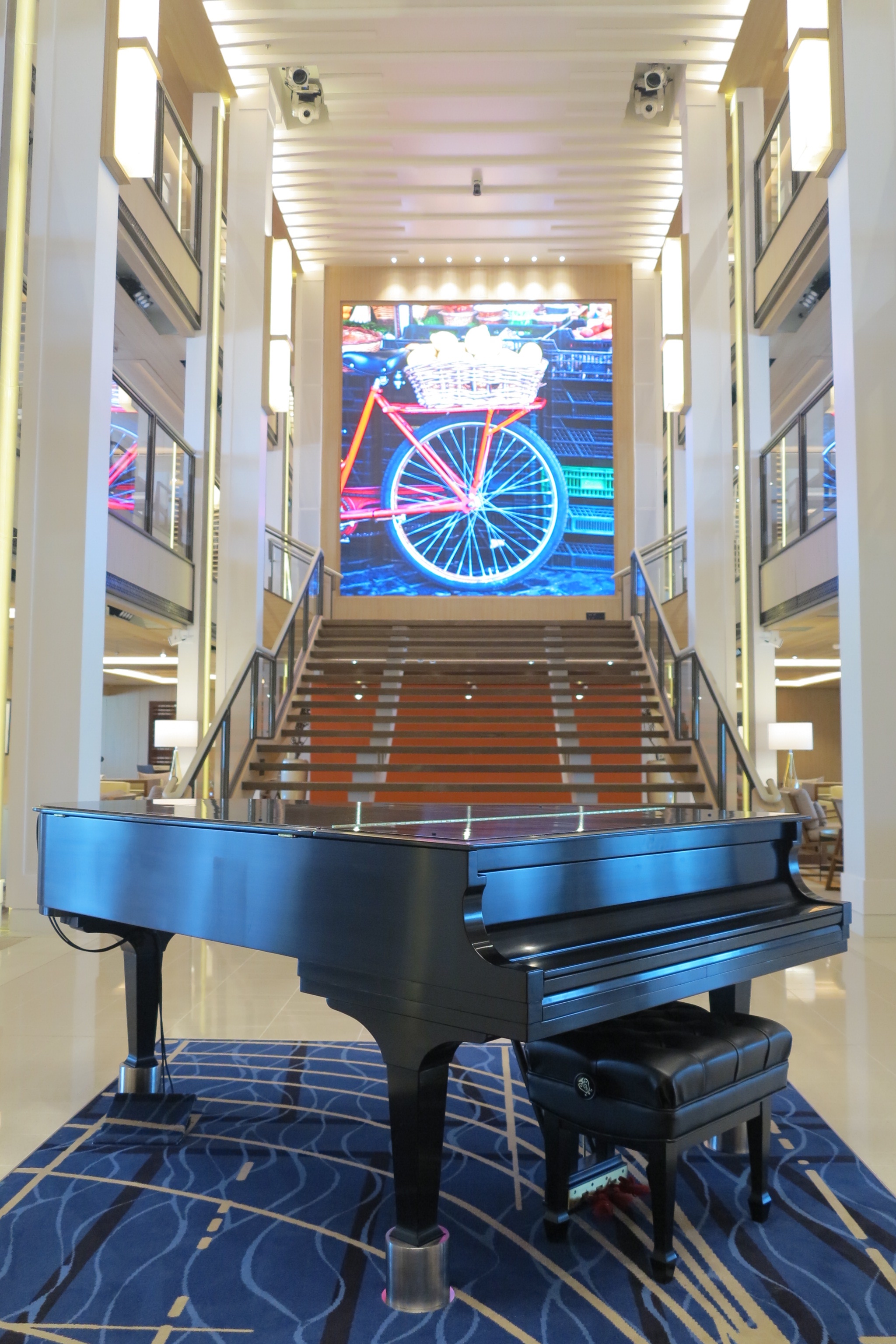 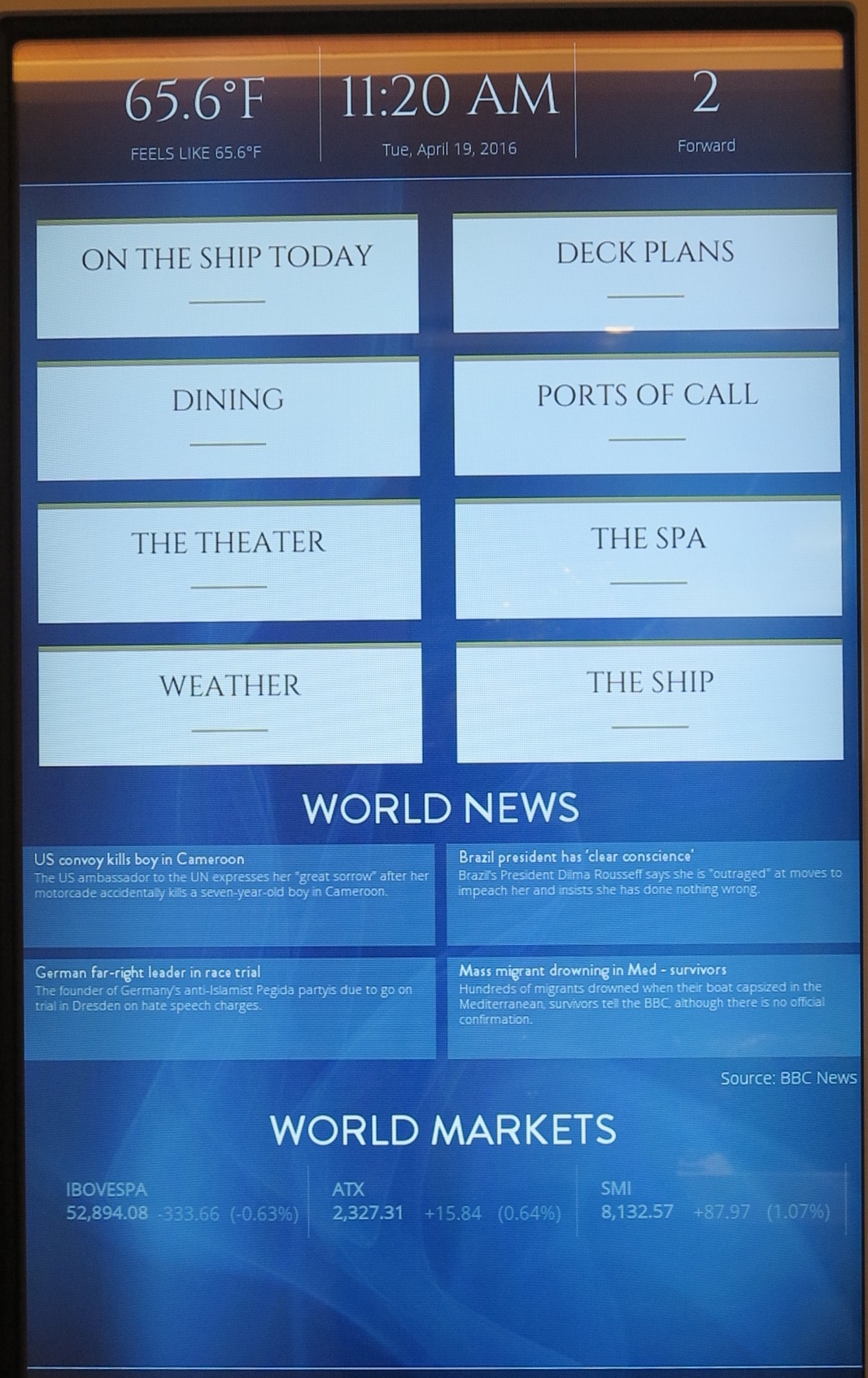 Information at your fingertips: Touch screens can be found around the ship

The spa not only offers a range of massages but has a sauna, steam room, plunge bath, its own pool and – most surprisingly – a snow grotto with flakes falling from the ceiling.

Everything seems to be done effortlessly, stylishly and elegantly without the hard sell you get on other cruise lines. Viking never forgets you’re on holiday so doesn’t throw in extra stresses.

Announcements are kept to a minimum and there are no noisy gimmicks or distractions. Entertainment is mainly live music – such as a guitarist, pianist or classical trio – or a film on the big screen by the pool, though there are some shows too.

Viking’s growing range of ocean-going ships are all about relaxation and experience. They also boast the most outside dining at sea so it’s easy in the evening to sit in the sunshine, enjoying your drink or meal, each other’s company – and the simple joy of sailing. 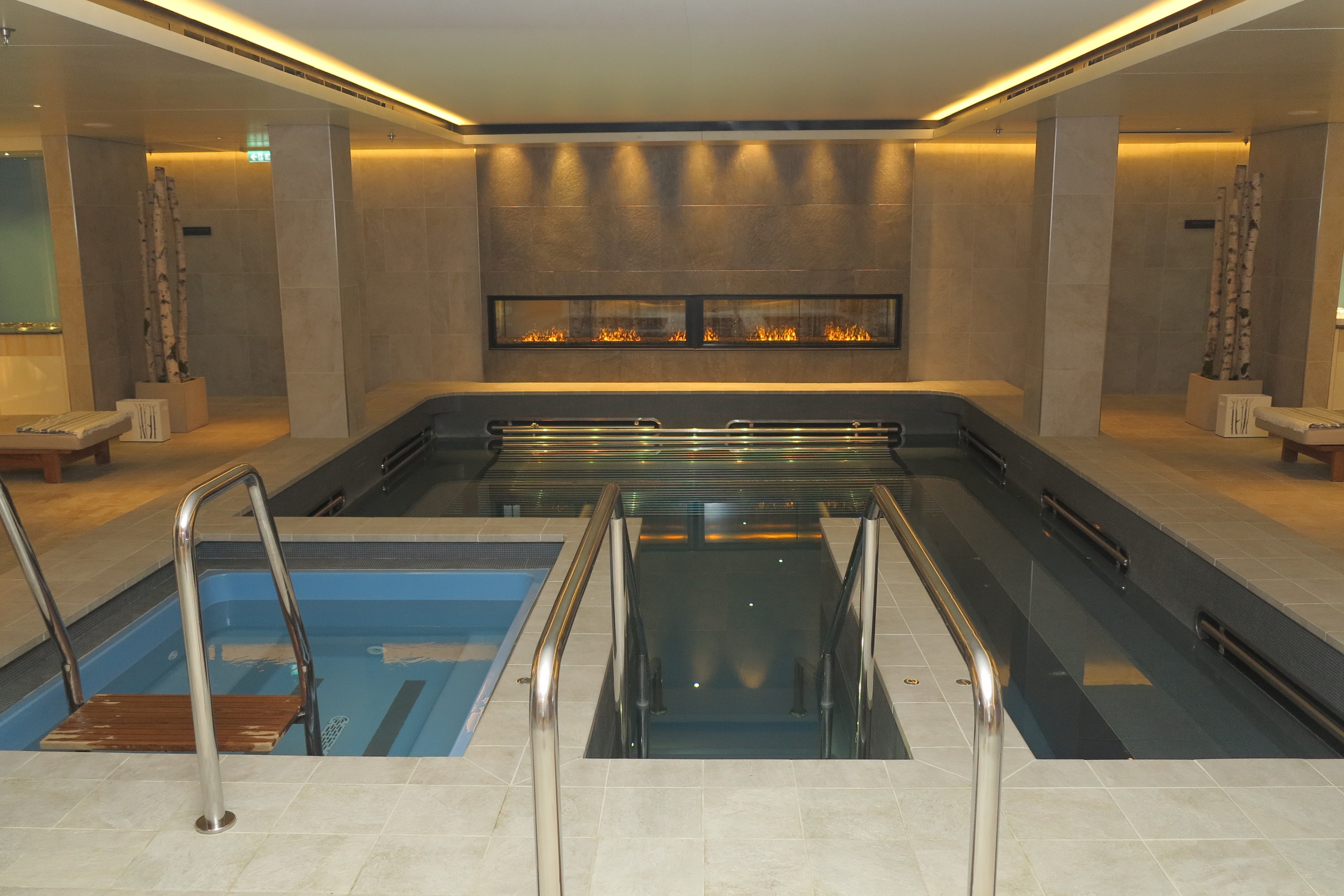 This came home to me in one port where we were berthed next to a much bigger ship. While we Viking guests were sat around the infinity pool watching a glorious sunset, everyone on the neighbouring vessel was far too busy with its noisy facilities to notice the natural spectacular.

As ships get ever bigger, Viking has brought a breath of fresh air to cruising in more ways than one. These small, sleek, modern ships reconnect you to the delight of sailing and travelling.

Dave Monk (Shipmonk) has been shortlisted as favourite blogger in The Wave Awards 2019. To vote, please click here 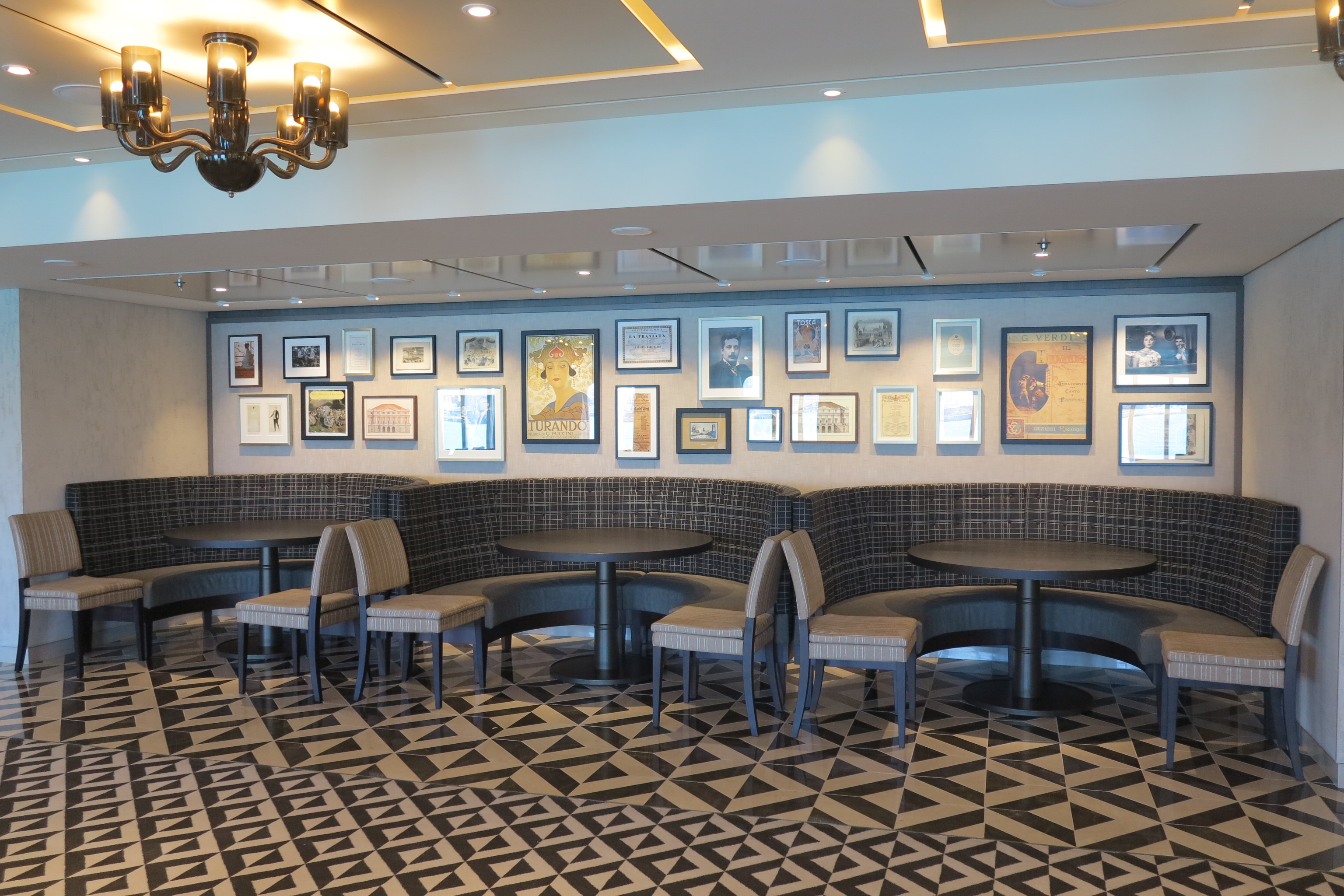 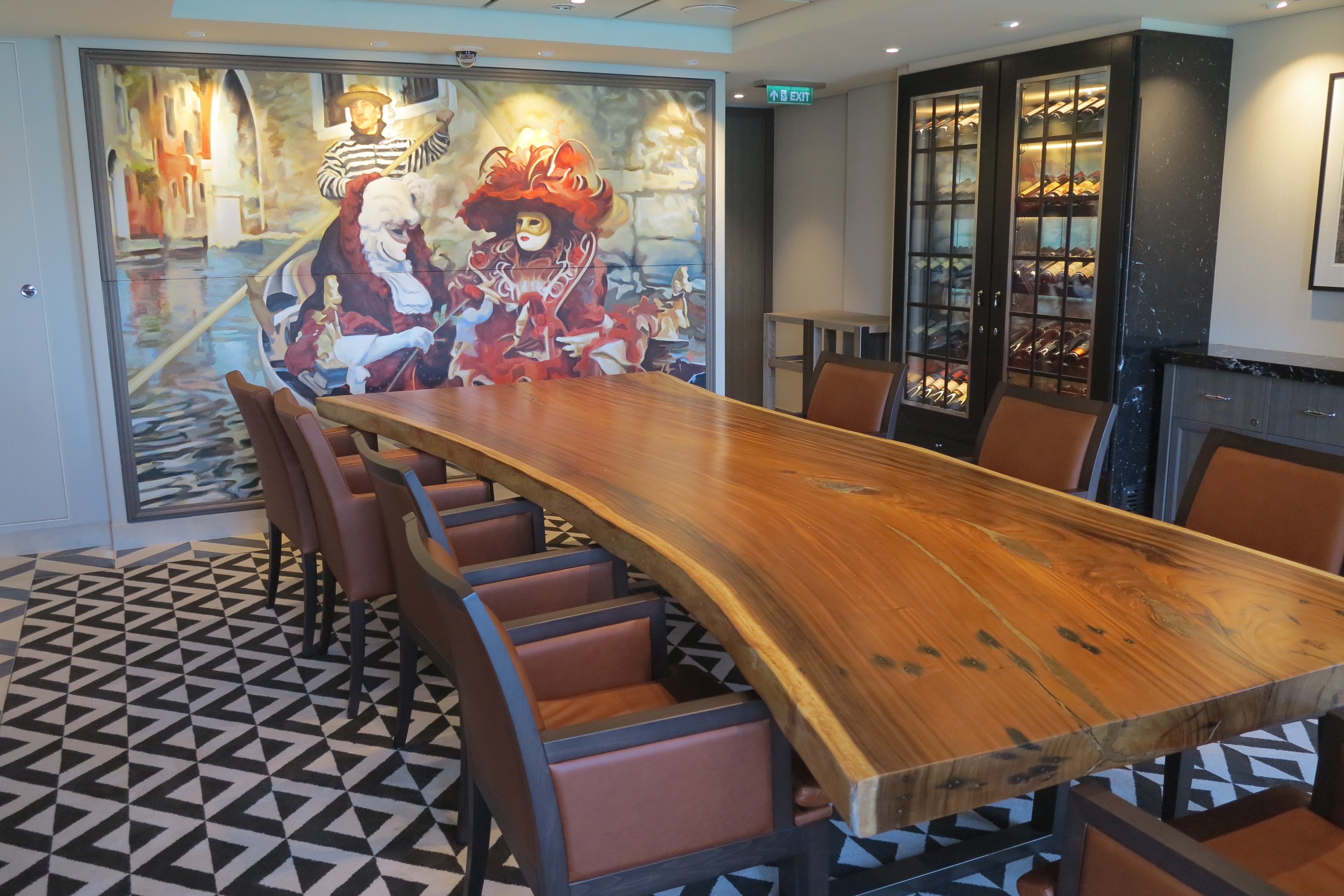 All yours: A private dining room 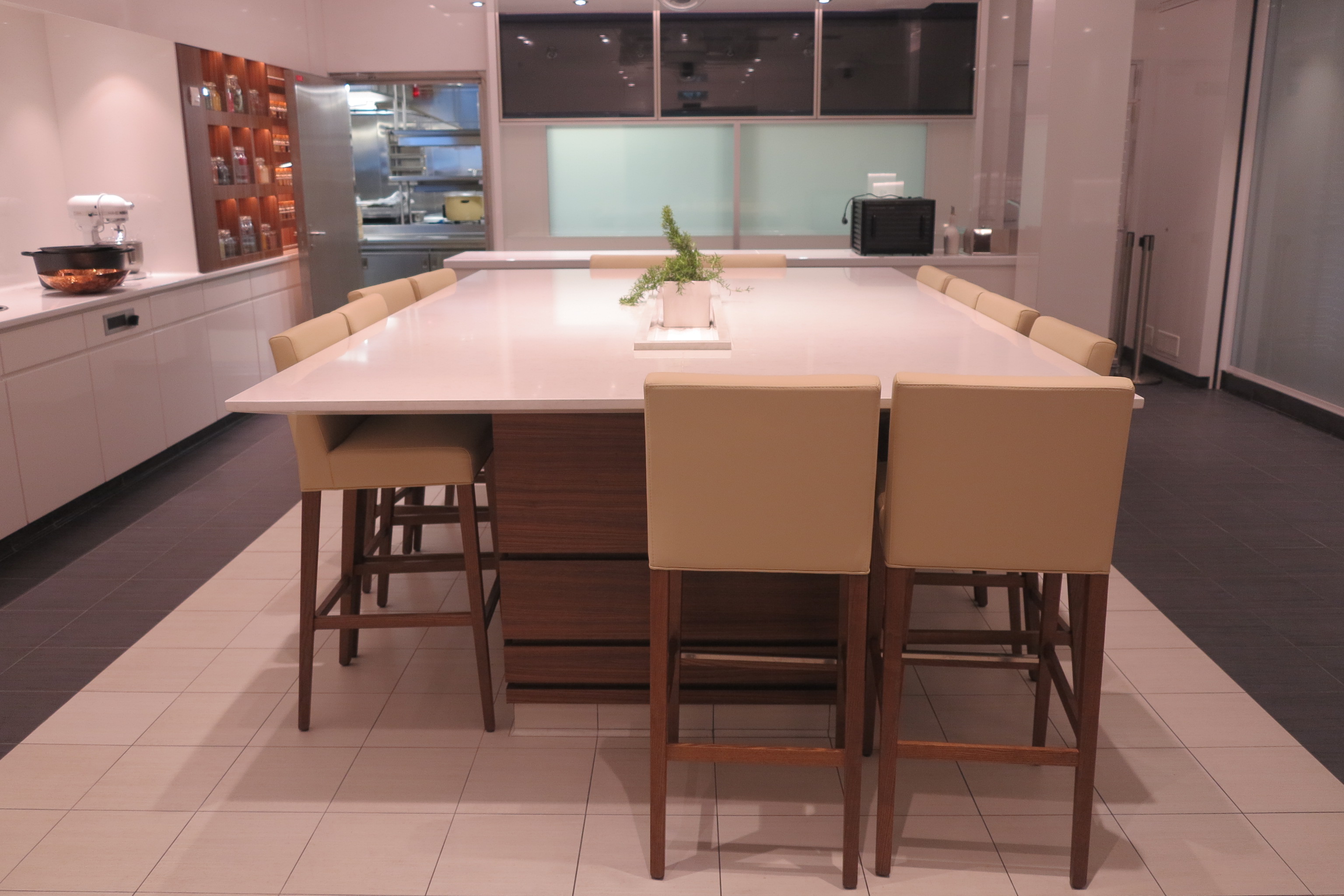 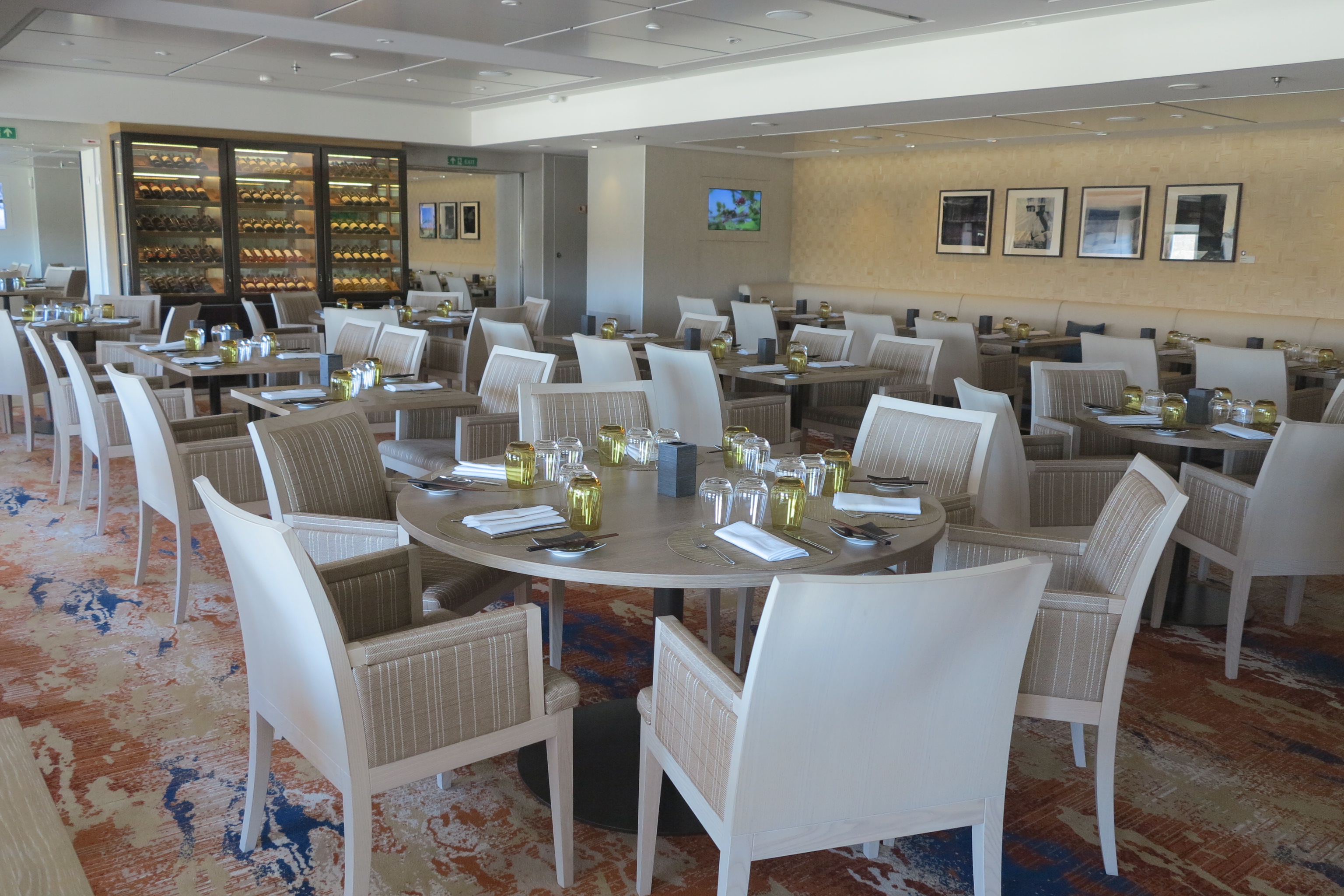 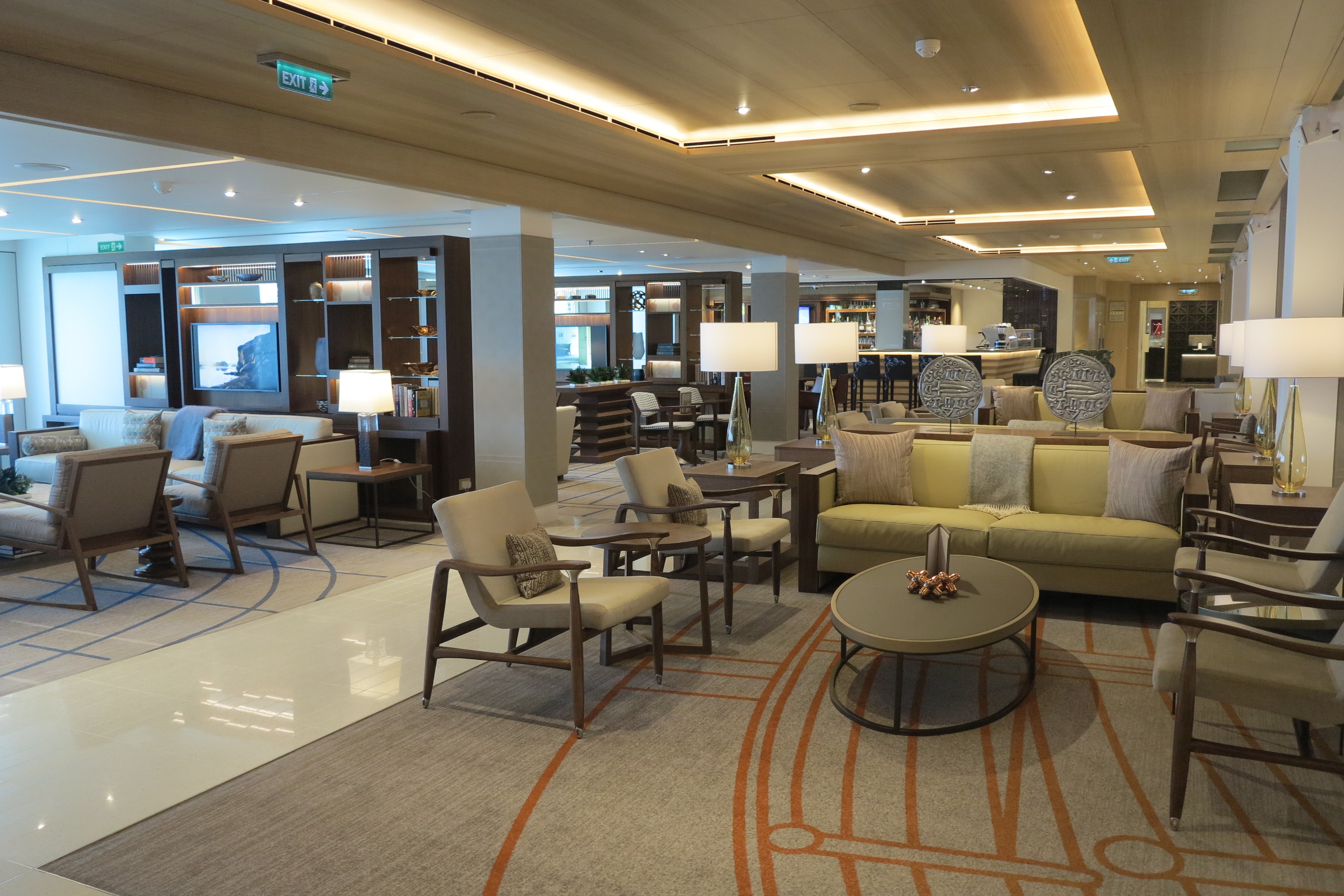 Sleek lines: Chairs in the atrium 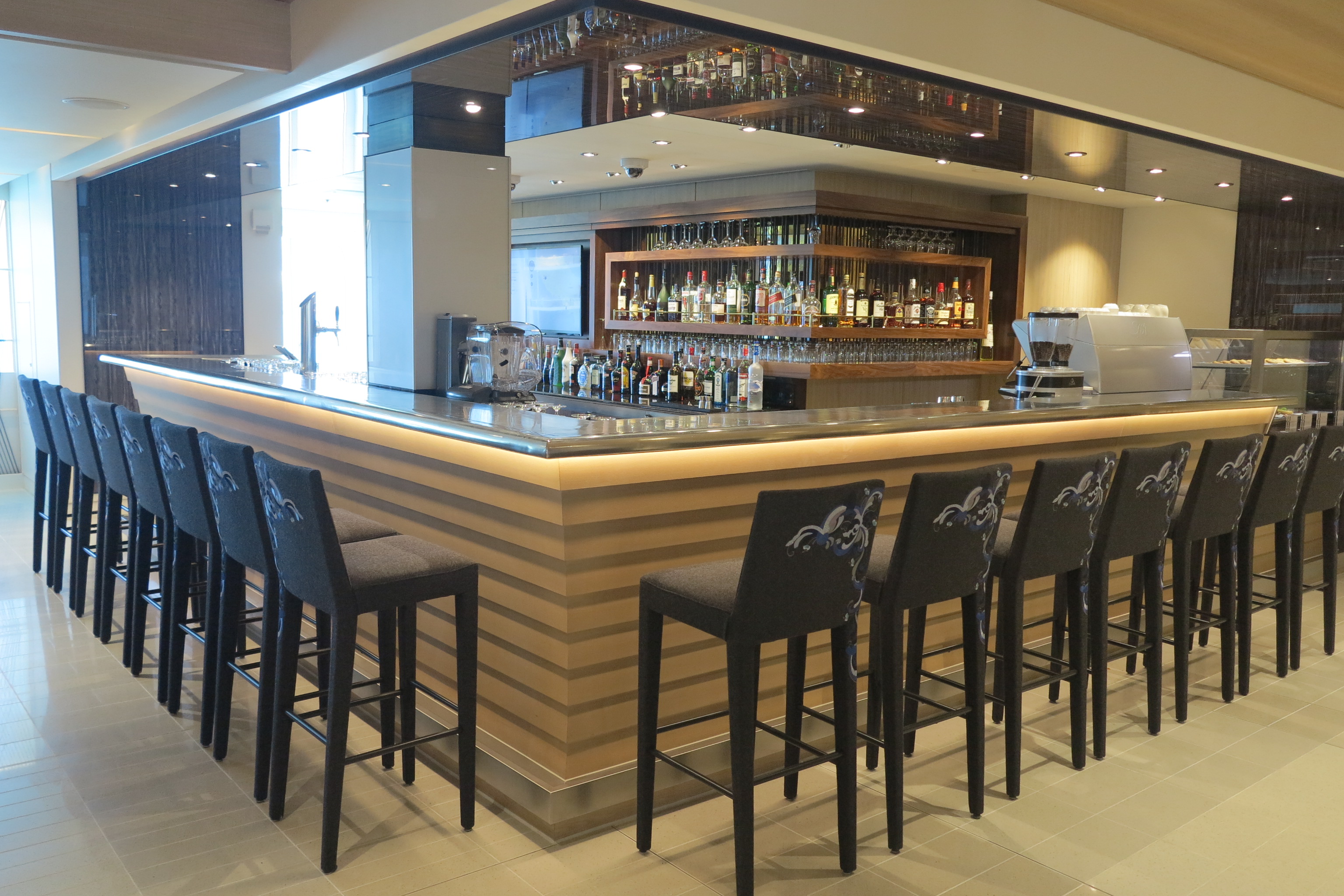 Bar none: The atrium bar