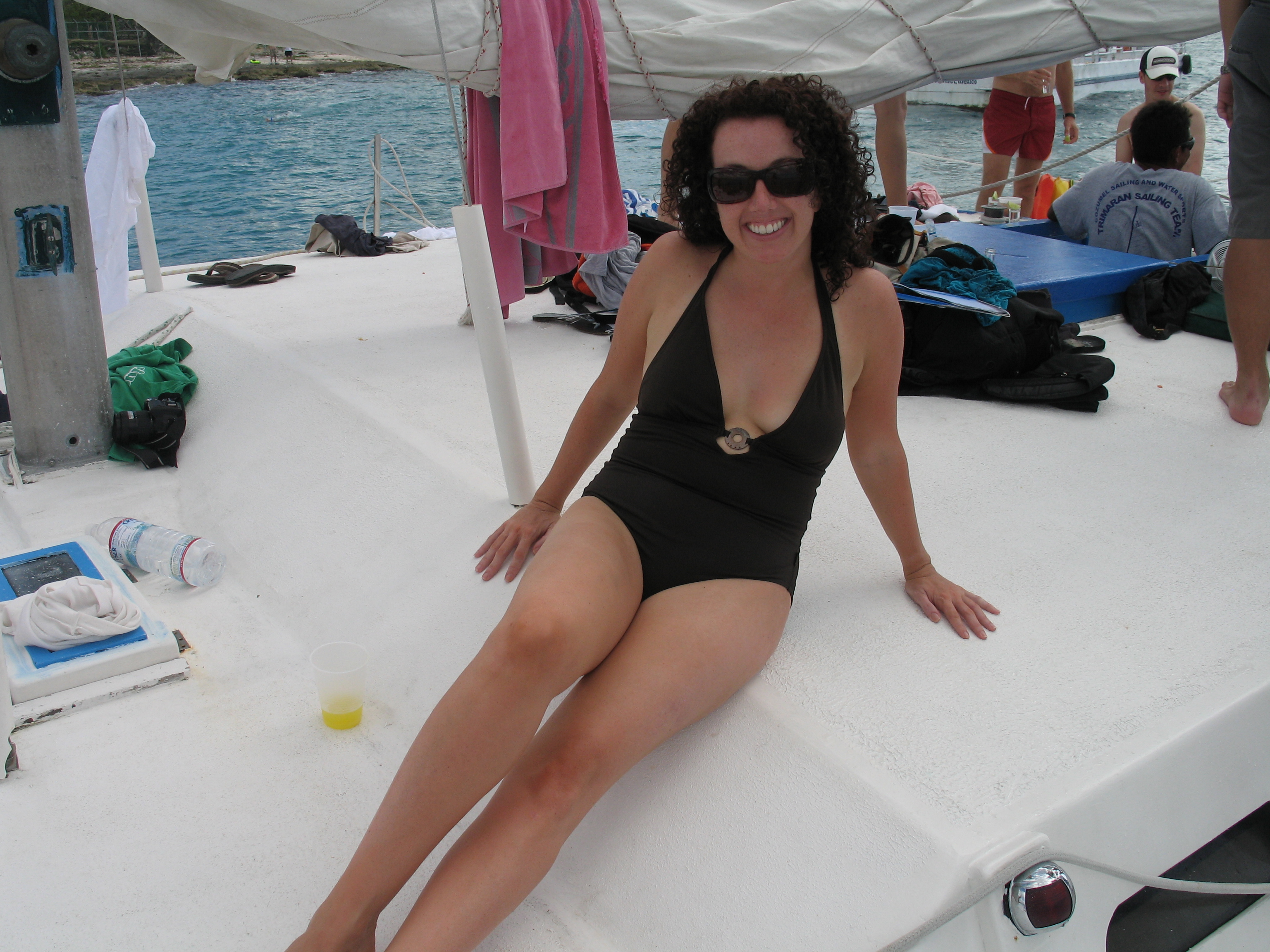 Taking it easy: Cathryn on a catamaran (Picture: Cathryn Chapman)

Watching cruise ship crew go about their exhausting tasks, it’s easy to think they have no energy left in their spare time to do anything more than grab a bite to eat and catch up on some sleep before the next shift.

But that’s far from the truth for at least some of the staff, according the author of racy new novel Sex, Lies, and Cruising, which is published today.

In her book, Cathryn Chapman tells how a 28-year-old English girl called Ellie joins a cruise ship to work in the photography shop and ends up jumping from one bed to another, with a bit of group sex and lesbianism thrown in. Written like that, it sounds crass but, while it’s not Shakespeare, there is enough heartbreak, regret, anxiety, doubt, jealousy, anger, humour – and a romantic desire to find the man of her dreams – woven between the not-too-explicit sex scenes to ensure the characters are not the two-dimensional figures than sometimes inhabit ‘bonkbuster’ stories.

Cathryn insists that – while it is very much a work of fiction – it is based on her experience of working with major cruise lines. She told me: ‘Many people sleep around, lie, and cheat with what I would call reckless abandon. Clearly there are happy couples who meet on ships – I know several – but for every truly happy and committed couple, there is another who has gone through the infidelity and immoral behaviour… In some cases, I know couples where one person has cheated, and to this day they are still together and their partner does not know.’

Now aged 40, and married with a child in her native Australia, Cathryn went to sea when she was 21-22 and again aged 31-32 – both times she broke her contract and left.

Despite working on her book for two years, Cathryn said: ‘I had trouble getting across just how bad life on ships can be at times. One of the hardest things for me was the way many of your friendships are superficial. At least Facebook and other social media have allowed people to connect after “ship life”, but I used to feel that people didn’t bother investing too much in becoming close friends, because there’s a good chance they’ll never see you again.

‘I recently caught up with two old colleagues/friends from 1997, but they’re literally the only people I’ve seen or talked to since that contract – and there were over 1,000 crew on that ship! My cabin mate at the time was very competitive and decided she hated me on the first day I think, and didn’t even get out of bed to say goodbye on the day I left.’

As for any parallels with her main character, Cathryn said: ‘I have some things in common with Ellie; for example, she gets involved with a character where a few messed-up things are discovered – those things happened to me – but actually not with the same person. I have “condensed” them into one minor character in the book. However, I wasn’t quite as adventurous as Ellie – some of the things she gets up to I have definitely not done! But then my colleagues or roommates did – so again, it’s still very realistic in that way.’

She said of life at sea: ‘Many of the crew, particularly waiters and room stewards, are from poorer countries where they’re on board purely to support their families. Some of those guys and girls are the sweetest, most hard-working people you’ll meet.

‘The crew, staff, and officers are somewhat divided in day-to-day life, though, so it was sometimes hard to keep up those friendships. For example, the Filipino crew generally had their own parties, the officers would hang out in the officers’ bar, then the staff and other crew hung out in the crew bar.

‘Many of the waiters, room stewards and engine room crew also have really long days compared to other departments, so the same types of people would be in the crew bar every night – entertainment team, bartenders, beauty/spa girls, photographers, cruise staff, “shoppies” (retail shop staff)… so it was boring in terms of seeing the same people night after night. I think that’s one of the reasons people behave the way they do… they’re bored.’ 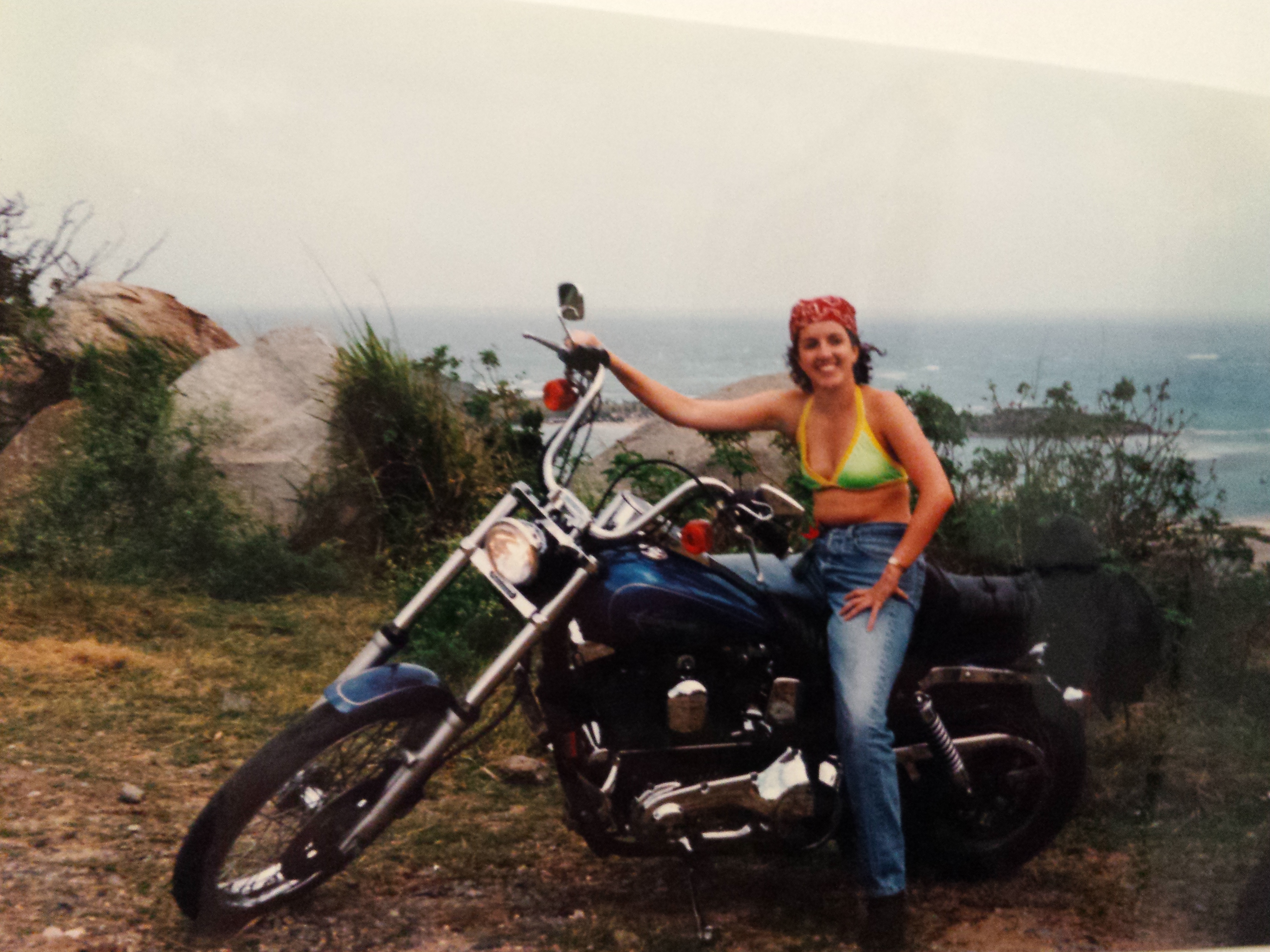 Spending your time sailing the Caribbean might sound like a dream job. But Cathryn said: ‘It’s exciting at first seeing the islands, but after a while it’s quite boring too. Particularly if you’re on a ship which does the Caribbean all year round, or your entire contract is there. You develop your same places to go, and then go there pretty much every week.

‘I remember some islands where I often wouldn’t bother to get off the ship. I’d think “Oh, we’re here again,” and I’d spend the day sleeping instead. I’ve spent all my cruise ship time in the Caribbean, Bahamas, and briefly the Mexican Riviera. I recently went on a cruise with my family – my first proper cruise as a passenger – and we did islands in the Pacific, near Australia. I came back saying I would never cruise again, but I think what I meant was I never want to do an “island” cruise again. I want to do Alaska, Russia, Europe… places I’ve perhaps been on land but, in terms of cruising, very different to the destinations I’ve seen time and time again.

‘Then again, some of my former colleagues are still cruising after over ten years. They’ve seen the whole world with cruise ships, and it’s just a way of life to them. That’s cool too – but it wasn’t for me.’ 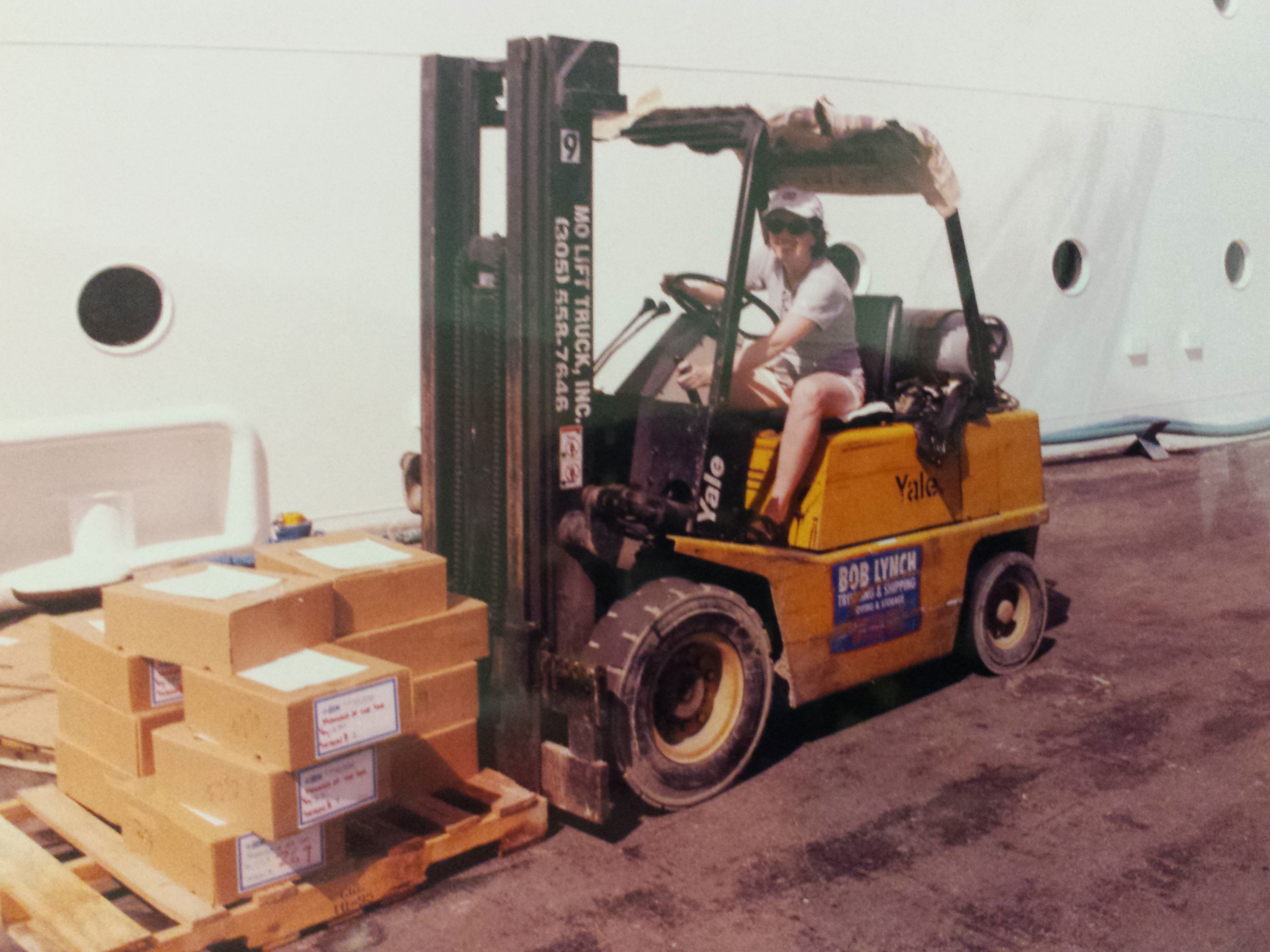 As for the passengers, she said: ‘You’d be surprised how rude and nasty people can be, especially when they’re on holiday! Most crew do try to see the best in passengers and enjoy their company. Obviously many of them “pretend” to enjoy the banter so that they get tips – but overall, I’d say that a fair bit of it is genuine.

‘Customer service is very important to the cruise lines, and they drum certain things into you during training. On one ship I worked on, it was mandatory to greet every single person who walks past you – crew or passengers – and it becomes second nature. So maybe if you’re enjoying your job, you go through your week happy and smiling, and you enjoy serving the passengers.’

She has fond memories of one family: ‘I felt homesick and sad, and I’d arrived into a team who were having lots of internal issues. It was an awful time, I was regretting being there, and there was more than one occasion I was holding back tears… Then I met this family who were doing the Christmas cruise as a multi-generational celebration. They were funny, kind, warm, friendly, and kind of took me under their wing. Every time they saw me, they’d make me feel welcome and interesting, calling out, “Hey, Cath, come over here! How are you? Great to see you!” And I have to say, they saved me that week. In fact, I still keep in contact with them today, and it’s been eight years.’

Now, though, Cathryn is concentrating on publicising her book – and writing the follow-up.

She said: ‘I’ve taken out a bank loan and pushed my financial situation to the limit to promote this book and kickstart my career. It’s what I want for the future of my family, and I want to ensure people take me seriously as a writer.’

My review in a nutshell: Sex, Lies, And Cruising is a great book to take away on a holiday at sea. Racy, pacy and fun, it can be picked up and enjoyed on your balcony, a lounger by the pool, or a quiet area of the bar. While not being too taxing – and not too explicit, though I wouldn’t lend it to your gran – it is a rounded story with character, humour and plot. Perfect to slip into your beach bag or have on your Kindle so you can look up at the staff and wonder what really goes on behind those ‘crew only’ doors.

To preview or order the book on Amazon, please click here

Shipmonk has been shortlisted as best blogger in the Cruise International awards.

One thought on “The truth behind Sex, Lies, And Cruising – an interview with author Cathryn Chapman”